Eric Church rode into Detroit on February 16 for two sold out shows at Little Caesars Arena as part of his Double Down Tour.

Most people would hymn and haw at a 3 hour Saturday night church service, but when pastor Eric is at the pulpit, the congregation is known to never sit down, let alone complain. Riding into Detroit for the second of two sold-out shows on his Holdin’ My Own Tour, Eric Church followed up Friday night’s classic with a 34 song medley of hits.

With no opening act, the show started with Eric front and center of a dimly lit stage, acoustic in hand strumming out the opening notes to “Drowning Man”. As the lights came up, the fans could see the enormity of the stage…..with a square catwalk surrounding the “choir”, three tiers of video displays, and more lights than JFK at midnight.

The first act featured hits like “Smoke a Little Smoke”, “Hippie Radio”, and “Drink in My Hand”. Giving the show a little hometown feel, he mixed in a bit of Eminem’s “Lose Yourself” during “Lotta Boot Left to Fill” and finished off the 14 song set with a medley of Bob Seger hits, which totally engaged the crowd in a sing along.

Act 2 opened 20 minutes later with “Solid” off the 2018 album Desperate Man. The video screens came to life (something that was lacking during the first act) rotating up and down with split screen images of the band. The camera crew followed Eric for some backstage bar tending antics during “Jack Daniels” and the boots flew fast and furious onto the stage during “These Boots”. Proving himself as one of country music’s fan favorites, Church repeatedly took time to stop and sign hats and album covers, drape himself in fan made banners and whatever else the crowd could come up with during the night. Again, he tossed in some local flare during the set with Marvin Gaye’s “Heard it Through the Grapevine” and repeated references to the times he has played at Flint’s Machine Shop.

Finishing off the night with a stroll through the crowd, American flag draped across his shoulders, the Chief thanked his flock and showed his never ending gratitude for their support of his art.

The tour now takes a turn up into Canada before heading down the east coast in April and the west coast in May. 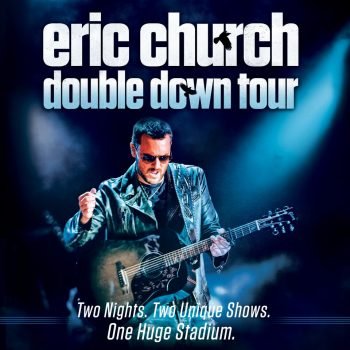