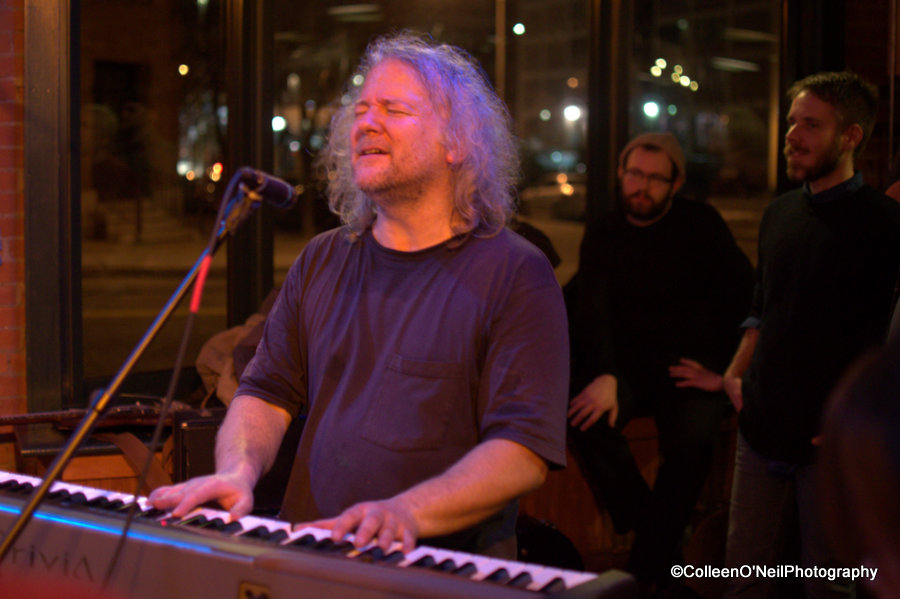 After more than a week of weird weather in St. Louis, MO — temperatures ranging from the downright balmy, to below-zero, more than eight inches of snow, followed by a veritable downpour of rain and the return of 50Â° — it only seemed appropriate the Schlafly Tap Room host an evening of music from The Conformists, Yowie, and Cheer-Accident.

The Schlafly Tap Room, part of the Schlafly brewing company, opened in 1991 in downtown St. Louis and boasts a newly built stage and redesigned room for performing bands.

The Conformists, St. Louis locals and self-described experimental punk band formed in 1996, started the evening with a dissonant and deconstructionist 30-ish minute set. To call them an opening act does a disservice to their impressive and tightly woven performance.

Up second was the St. Louis-based Yowie, formed in 2001. The trio is comprised of two guitarists (Chris Trull–voted St. Louis’ best guitarist in 2012–and Jeremiah Wonsewitz) and Shawn “The Defenestrator” O’Connor on drums (voted St. Louis’ best drummer in 2013). Their sound can best be described as experimentally progressive. Or progressively experimental. Either way, while their sound is occasionally misinterpreted as improvisational, the exact opposite is true: every song is performed as meticulously as it was written–no easy task when each song can best be described as impossibly complex and incomprehensible.

Rounding out the night were the legendary Chicago-based progressive-and-a-ton-more-adjectives Cheer-Accident. Formed in 1981, Cheer-Accident has consistently been inconsistent–in a good way. Never stagnant, the band’s sound has evolved, revolved, and devolved throughout the years and even throughout songs. The band has never played the same show twice, and this night was no exception. From dreamy pop-like grooves to odd-timing and dissonance, Cheer-Accident had the packed crowd transfixed from their opening notes to Thymme Jones’ (founder and drums/trumpet/vocals/keyboard) final thank you to the crowd, The Conformists, and Yowie.