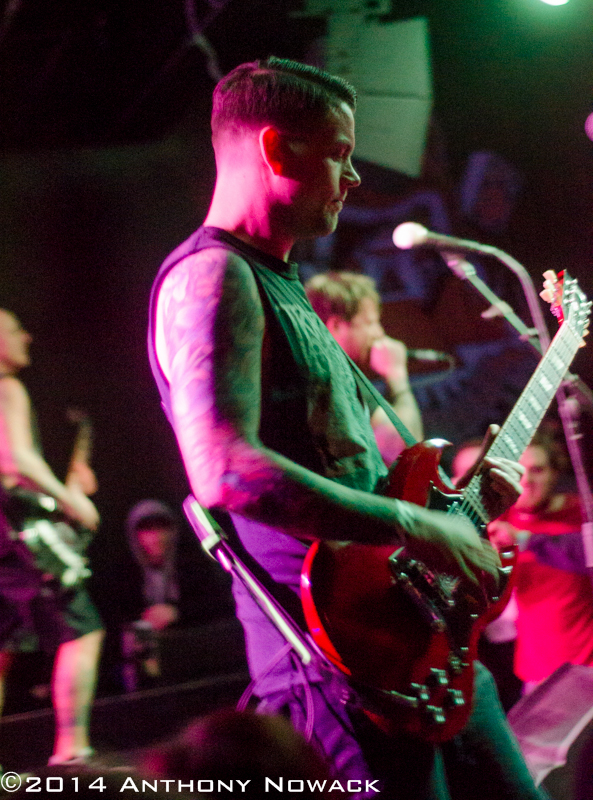 Comeback Kid was scheduled to play on Friday, February 21st, 2014 in Grand Rapids, Michigan at The Pyramid Scheme with supporting acts Backtrack, Xiabalba, Downpresser, and To the Wind. Â There was a huge crowd waiting for the band and the floor was kept open for moshers dancing and moving to the music.

Hailing from Seattle, Washington, To the Wind opened the show warming up the crowd up. Downpresser, from Santa Barbara, followed and kept the crowd moving. Xiabalba was the third band to perform; the audience was growing more pumped by the minute.

By the time Backtrack hit the stage, the crowd was excited and dancing. They began with their first song, and James Vitalo (lead vocals) issued several invitations the crowd to join the band on stage. Many of the audience accepted joining them as part of the show.

Backtrack, from Long Island, New York, offered an energetic hardcore punk style that raised the excitement level in the room and the fans were having a great time. They are a five-piece band touring in support of their new album, Lost in Life, released in January 2014.

Unfortunately, not everyone was content to simply enjoy the music. Backtrack stopped their show more than once to ask people whom were fighting to calm down and take the it outside. The singer even commented he could be home with his girlfriend if all they wanted to do was fight.

Backtrack was the fourth band on the bill and clearly putting on a great show. It was disappointing they had to cut it short. It was nice to see a band care that much about their audience getting hurt in the melee. During the break, the lead singer came out, sat on the stage, and talked to audience members. It is not often you see artists taking this much interest in their fans!

Finally, it was time for Comeback Kid. This Canadian punk band from Winnipeg, Manitoba is signed with Victory Records. The band consists of Andrew Neufeld, Jeremy Hiebert, Matthew Keil, Kyle Profeta, and Stu Ross. All of them put on an exciting show, leaving the audience begging for more.

Comeback Kid showed they were thoughtful in planning this tour and how they engaged their fans. They said they were excited about picking the bands on tour with them. Their set consisted of a mix of old and new material, and they often asked the audience which they wanted next. During the show, they also let it be known their new album, Die Knowing, is due out in March of this year!

These Canadian rockers put on an awesome show for their fans, and a tour of companion acts that made everyone happy. It was a good night of hard-core punk music!

The Die Knowing Tour runs until March 23rd. They will be at the Pike Room in Pontiac, Michigan tonight, February 22nd, and at the Agora Theater in Cleveland, Ohio on Sunday, February 23rd.