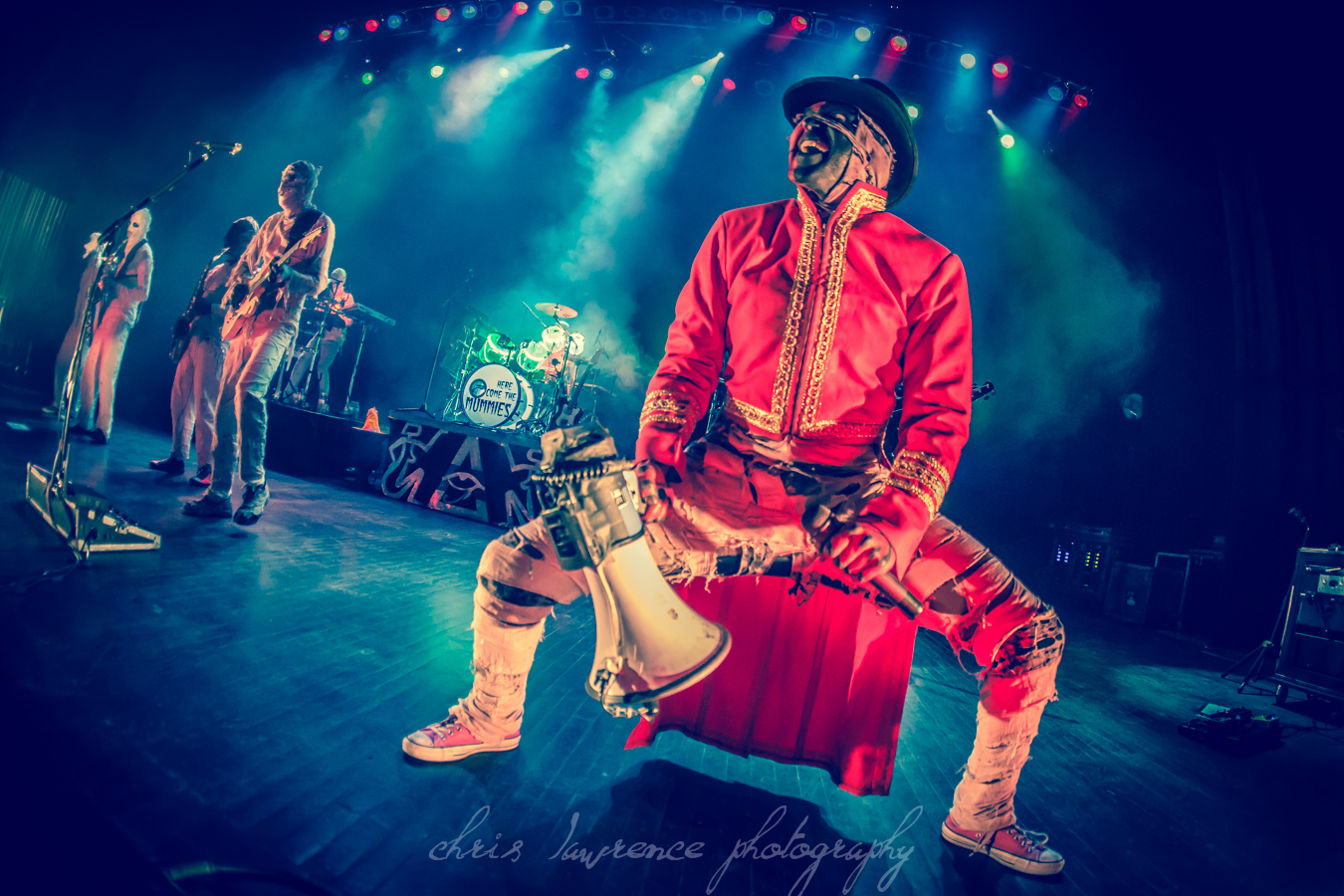 Winter might still have a fierce grip on the Midwest, but not even a miserable snowstorm or polar vortex is going to stop the people in Michigan from going out and enjoying a live concert. This weekend brought us back to back shows from the funk and groove band, Here Come The Mummies.

Hailing from the ancient desert sands where the pharohs lie, they’ve been traveling the world in search of a release from the curse laid upon them by a vindictive king millenia ago. But nevermind that sad story; this weekend they came to bring their groove to The Fillmore Detroit.

The Mummies unleashed the first song from their upcoming EP, A La Mode, the first in a series of mini releases to come out over the course of the year. A Mummy show is not one you will soon likely forget. With their 2013 highly acclaimed release of Cryptic under their ‘bandages’, the Mummies have been touring at their leisure around the world with their funky ‘ragtime’ monster rock.

After rocking the cold winter tundra of the Midwest, they will make their way to the sunny climates of the Southeastern USA to enjoy some well deserved sun, sand, and more than likely a few southern goddesses to woo with their soulful sounds.

The real deal treat of the night however was the the highly successful and well received Motown sounds of the opening act, The Infatuations. The Infatuations is ‘Simply Detroit’. The Motor City starts coming out of your speakers the second the first note hits. These guys celebrate every sonic movement that is Detroit by combining the pop suss of Motown soul, the sheer in-your-face bravado of Parliament Funkadelic, and the raw, untamed energy of Detroit rock â€™nâ€™ roll. The results are undeniably spectacular.

One of the hardest working bands in the Detroit area, these guys are the real deal Motown sound. You can’t go anywhere around the Metro area without seeing one of their stickers tacked up somewhere, or find them playing a couple venues a week to get their sound out.

The music The Infatuations make is infectious. It has a way of getting under your skin. The hooks have the swagger, the flowing sexual energy, to seduce their audience like a hot girl on the wrong side of town. That is why the band is so aptly named â€“ because it doesnâ€™t simply have ‘fans’ like other bands. Its followers are genuinely infatuated with the music. Everybody that listens to the Infatuations is basically having a love affair with the members. Itâ€™s intimate. It means something. It feels really good.

The band is currently working on their 1st full length release due out in spring of 2014 and has thus far released the five-track January Sessions EP in 2009, the Blame It On You single in February 2012, Recorded Live in Front of a Studio Audience live EP that same month, and the video and single for Yesterday Morning on Thanksgiving Day 2013.

Those recordings, as well as countless stellar live performances, have led to The Infatuations receiving an Emmy Award nomination in 2012 for the Blame It On You music video. The Infatuations has won the Vitaminwater People’s Choice Award two years in a row (2011 and 2012) as a part of the Detroit Music Awards. In 2013 The Infatuations received two Detroit Music Awards: Outstanding Urban/Funk/Hip Hop Recording and Outstanding Urban/Funk Artist/Group. Out of 12,000 bands, they were the Detroit Finalist and Top 25 Global Finalist in the 2013 Hard Rock Rising Global Battle of the Bands.

The Infatuations are one of the best dance bands and rock bands to have come out of Detroit in recent years. In this town, that means a hell of a lot.

Interview with the Mummies in Detroit, Michigan.

The Infatuations by Chris Betea