Joe Bonamassa adds Radio City Music Hall to his list of conquests as part of his mission to bring blues to the masses. 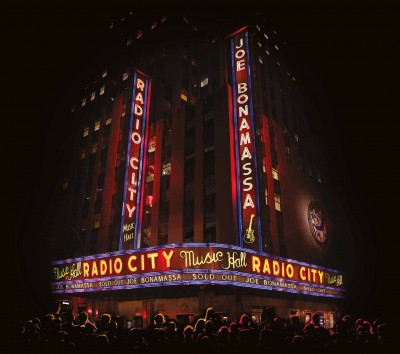 A native New Yorker, Joe Bonamassa would frequent the Radio City Music Hall in his youth. As such, it has been his life long ambition to play there. His dream culminated in two sold out nights at the iconic venue earlier in 2015. To add further significance to the shows, one of the dates fell on his mom’s birthday.

Live from Radio City Music Hall is the latest in Joe’s series of live recordings from the the most prestigious concert halls/venues around the world. The live CD features thirteen of the nineteen tracks on the DVD. The show is made up of two parts, the first of which forms an acoustic segment the likes of which was encountered on Joe’s Live at the Vienna Opera House album.

Bonamassa and The Huckleberries breathe a new lease of life into tracks we know and love like “Dust Bowl,” “Happier Times,” and “Trouble Town.” The acoustic tracks are beautifully arranged, all of the various elements working together to give these songs a huge sound with some Celtic influences.

There is palpable chemistry on stage between Bonamassa and Reese Wynans who play off each other throughout the whole show, particularly on the likes of their rendition of Howlin Wolf’s “Hidden Charms,” “I Can’t Be Satisfied,” and the epic “Love Ain’t A Love Song.”

Anyone who witnessed Joe’s shows at Hammersmith Apollo earlier this year will know that he is on top of his game right now, and this recording brings back some fond memories of those shows. Live at Radio City Music Hall has captured the Bonamassa concert experience perfectly, with a very well packaged live recording. We eagerly look forward to Joe’s UK arena tour in October.