The crowd reaction stuns The Cadillac Three at their one-off UK show.

Interrupting their current US tour, The Cadillac Three returned to London for a sold out show, where their army of dedicated fans had started queuing from the early afternoon. Hailing from Nashville, Tennessee, the guys had flown in only a few hours earlier.

Support tonight is from Aaron Keylock, and joining him is bassist Jordan Maycock and drummer Sonny Miller Greaves.

Flicking his mane of hair, a spotlighted Aaron kicks off the proceedings, propelling all into full-on rock with “Medicine Man.” Aaron pauses introducing himself and announces, “We are gonna kick off the night with some rock’n’roll!” to rapturous applause.

The heavy, upbeat “Against The Grain” sees both guitarists bounce around, hair swaying and jumping in synchronisation. The new song, “Down,” offers up a bluesy country and contagiously toe-tapping intro. The tempo is slowed with repeated punctuations of the title, building up the pace to a rhythmic blues and the scenario thus repeated. The crowd is hooked, swaying in unison, concluding with Aaron stepping forward with some killer guitar laden riffs.

The bass heavy intro of “Lovin Lies” showcases powerful drum playing, giving rise to allow Aaron to be the maestro of the guitar solo, fast paced, deep and fervent, before merging back into the blues. “Just One Question” entices the crowd to sway while Aaron’s soulful vocals portray emotions of more maturity than his age of seventeen. The pace quickens with the foot stomping, “All The Right Moves.” Aaron changes guitar for the mid-tempo, free-spirited “Just Spin The Bottle,” with its opportunistic vibe and catchy chorus.

The final song, “Ain’t That Kindness,” is a blues rock fusion with pure unadulterated head down boogie. The drums dominate, setting the pace before the power slides back to the guitars on full throttle. The sudden ending sparks impassioned and zealous applause.

Amidst a darkened stage, the up-tempo intro music for The Cadillac Three has its volume intensified. The audience responds with hyped-up enthusiasm. Singing along to AC/DC’s, “If You Want Blood,” the crowd become a pulsating mass of energy. Kelby, Jaren, and Neil appear, visibly pumped and eager. The uproar from the crowd confronts them such that they are noticeably touched and taken aback.

Launching into “Days Of Gold,” Jaren stomps back and forth, engaging the photographers. Meanwhile, Neil proves he’s a powerhouse on drums. There is an explosive interaction with the crowd, setting the scene for the evening ahead. Jaren duets on the drums mid-song; he reverses Neil’s baseball hat and puts his own muscles to work on the skins while Kelby headbangs along. Duet over, Jaren’s drumsticks are thrown to the crowd. The applause is deafening, and Jaren exclaims, “This is crazy man.” 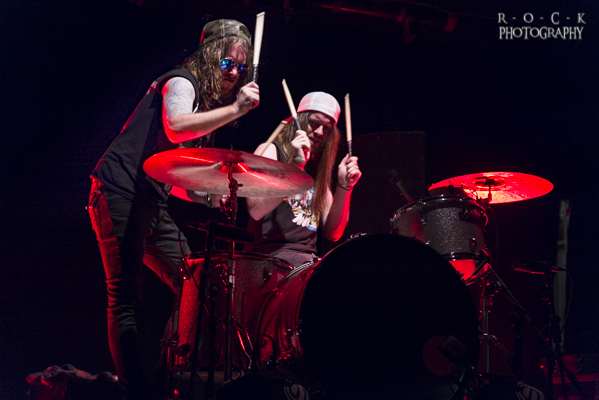 “Peace Love and Dixie” provides the perfect canvas for Jaren’s Southern twang on this sultry blues number, accompanied by the crowd. The tempo rises, and Jaren epitomises the ‘more swagger than Jagger’ attitude with his hipster shuffles.

Neil stands, playing the drum rims on “I’m Rockin'” as the crowd clapping in rhythmic unison. The Cadillac Three are taking country fuzz and getting down and dirty with it. The crowd sing along with every word. There is a charged electricity in the room, leading an ecstatic Jaren to exclaim, “Lord, have mercy!” He further entertains and entices audience participation as the venue echoes back with, “Hell Yeah!”

After introducing the band members, they share that it took two and a half hours to transfer from Heathrow Airport to their hotel in London earlier, but that it felt “good to be home,” which goes down well with the audience.

The popular “Tennessee Mojo” brings Neil to his feet, interacting with the masses and whirling up a fevered energy. The crowd participate while Kelby’s slide guitar develops the sound with haunting echoes and sinewy interplay. The smiles are huge, and the applause is monumental. A rhythmic intro to “Back It Up” is soon taken over by the crowds knowledge of the song as they sing in unison. Jaren adds his gravelly tones that are full of soul, proceeding to show off his stage prowess by utilising the whole floor space for his dynamic twirls.

Beer in hand, the band thank the audience for helping them to continue to sell out every headline show in the UK, share their love of playing here and appreciating the enthusiasm shared.

Debuting in the UK, the new heartfelt ballad “Red Lights” gives Neil a rest, as Kelby and Jaren take on this sultry love song.

The lights dim and white lasers appear backlighting the band. A superbly heavy intro ordains the scene for the attitude-laden “Whiskey Soul Redemption.” Neil is back on the drums, setting the pace with a steady underlying beat and Jaren’s Southern twang is in full force. Mid-song, an energetic Jaren pinballs around the stage, joining Neil for a boogie by Kelby’s side during a spectacular slide guitar solo.

The rest of the evening follows in the same vein. Another new song, “Graffiti,” of power-ballad ilk enthralls with “Party Like You” being a crowd pleaser gaining the loudest applause yet. “Raise Em Up,” a country number penned by Jaren, exploits Neil’s skills on drums.

The thunderous riff-laden beginning of “I’m Southern” steps up the ante another notch. The crowd cannot contain themselves. “We came just for the party,” a line from “Get Your Buzz On,” epitomises the evening. There is an electrifying warmth as the 800-strong crowd don’t want this party to end. The anthemic “White Lightning,” has the audience joining in on the chorus. Then, the rarely performed “Life” proves to be a real fan favourite, showcasing The Cadillac Three’s signature heavy, swamp boogie sound.

Finishing with “The South,” an instantaneous crowd sing-along manifests of such proportion, it blows the band away. Visibly stunned, the band soak up the atmosphere while the chanting continues. Kelby exploits his swift slide guitar tricks and Jaren kneels before the crowd in appreciation. The masses chant again. Jaren declares “Hell Yeah!” and an extended version continues with multiple rounds of the chorus while both the band and audience show their mutual appreciation. The band are awestruck and appear reluctant to leave the stage; however their finale music is played, and the lights go down. The audience, for the last time that evening, applaud in thunderous fashion.

The Cadillac Three return to the UK in January 2016, with the Night Life Religion Tour, supported by Whiskey Myers.