The Raskins have been invited to open for MÃ¶tley CrÃ¼e on their upcoming Final Tour, which is already sold out in many markets and also features very special guest Alice Cooper.

In anticipation of such a huge tour and career crossroads, The Raskins (which is comprised of Logan and Roger Raskin) have brought in respected producer Brett Hestla to re-mix 4 tracks from their self-titled debut album (released May 13th via MIRAL Records distributed by BDG/RED Distribution, LLC – a division of SONY Music Entertainment). Hestla first came to prominence as the touring bassist in CREED from 1999-2004. After Creed disbanded, he joined with Clint Lowery from Sevendust and Corey Lowery from Stuck Mojo to form DARK NEW DAY.

While Motley CrÃ¼e’s Final Tour will see one of rock’s most iconic groups gracefully bow out from the touring circuit, it will introduce one of the most promising rocks acts to a whole new audience from coast to coast. Get ready to rock with The Raskins!

The Raskins album is available for immediate download on Amazon: 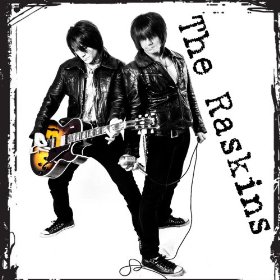