Texas progressive death metal band Obscure Oracle is on their way to their second album.

From San Angelo, Texas, Obscure Oracle is known around the parts of west Texas and the Austin metal scene. Though metal is still running underground in Texas, there is usually a decent turnout for shows in support of local metal acts.

Forming in 2011, and like any band in the rock industry, Obscure Oracle has experienced line-up changes. Brought together from other death metal bands around the area, there was a vision to make the unique and technical sound of Obscure Oracle. Currently, youâ€™ll find, Rusty Bartholomeo (vocals), Danny David (guitar), Patrick Humphreys (Guitar), Chris Crisis (bass), and Javi Rodriquez (drums) rocking the stage. 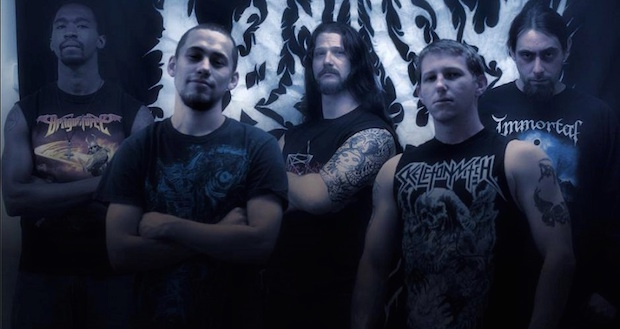 Their first album, Roots of Existence, was released in the fall of 2013 and available on iTunes. The sound is like the band was crafted to give the listener an experience rather than track-by-track traditional album. Their second album is in the works and, like many bands, are taking a grassroots approach into making music. They have set up a GoFundMe page in hopes of getting the quality studio time to make the next record.

Obscure Oracle’s approach to music is to make their audience think. They hit the full spectrum of sound from progressive to death metal. The full range melodic scales and distortion on guitar, and clean rhythms on drums matches well with the tones of Bartholomeo’s vocals.

“Obscure Oracle is on a path of no return and on a mission to see the world in the years to come. Our passion speaks through the music itself through a dynamic view of ones self at life. Our intention is to open the minds of individuals; to see the world through our eyes as we conjure the musical influences that drive this band to pursue the meaning and purpose of our existence.” – Wretched Records website.