Corrosion of Conformity will kick off the second leg of their North American headlining tour this week. The A Quest To Believe, A Call To The Void II Tour, set to commence on July 26th in Poughkeepsie, New York and run through August 25th in Providence, Rhode Island, includes appearances at Heavy MTL and KISW’s Pain In The Grass, as well as a headlining performance at Psycho Swim, Psycho Las Vegas’ annual pool-bound kick-off bash where the band will be joined by Lucifer, Danava, ASG, Primitive Man, and more. Support on the near-month-long journey will be provided by their comrades in Crowbar as well as Lo-Pan and Quaker City Night Hawks.

In September, Corrosion of Conformity will hit the tour circuit again, this time with support from The Skull, Mothership, and Witch Mountain. The fall trek begins September 22nd in Newport, Kentucky and will winds its way through a dozen cities upon its conclusion October 7th in Flagstaff, Arizona. Later that month, the band will appear on the inaugural MegaCruise alongside Megadeth, Anthrax, Testament, Overkill, and so many others. See all confirmed dates below. 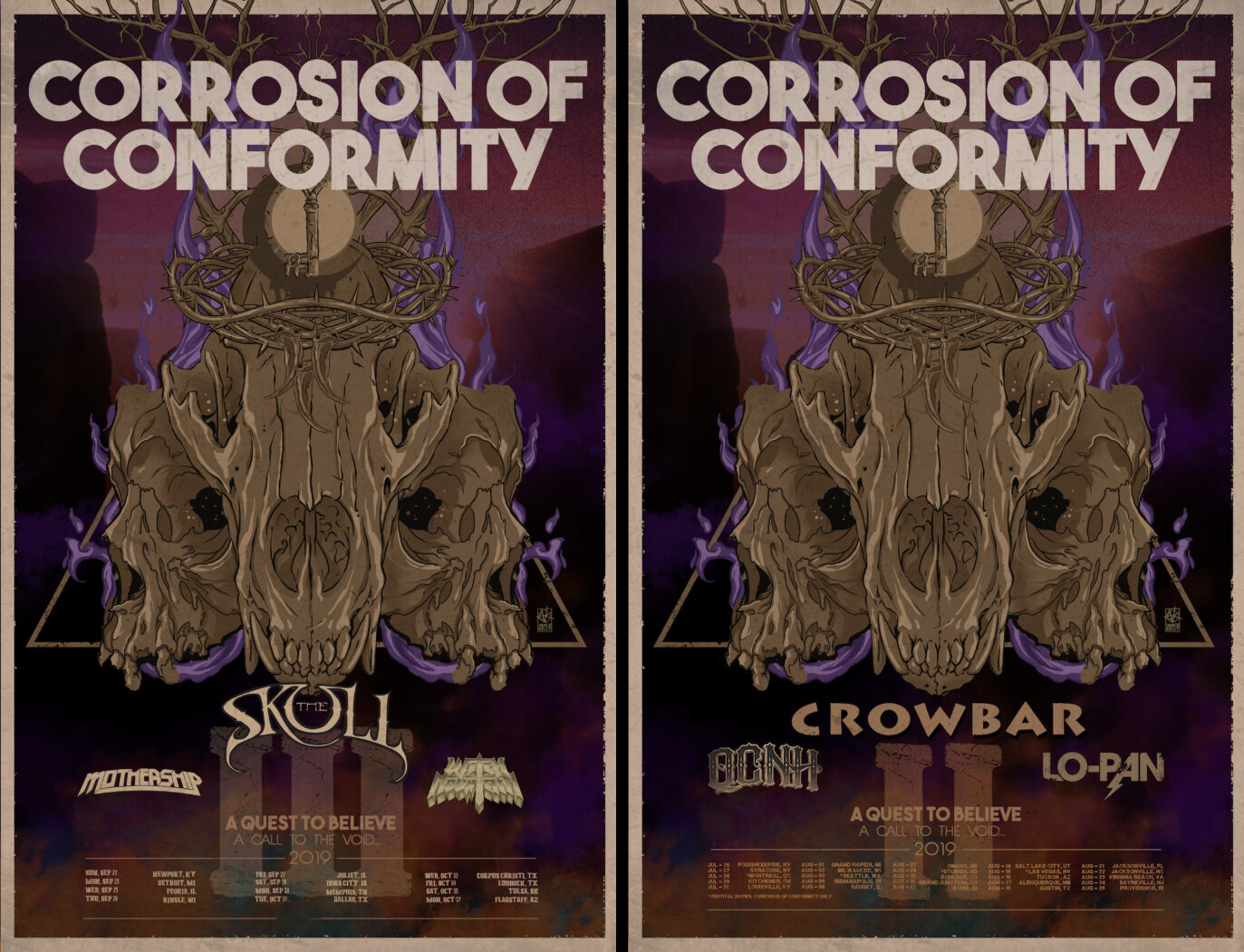 Revolver Magazine, in collaboration with Inked Magazine and East Side Ink, recently hosted a contest during the band’s stop in New York City earlier this year where one lucky fan won an opportunity to meet the band and get a COC-inspired tattoo of their choice with the band present during the process.

Corrosion of Conformity’s critically-lauded No Cross No Crown full-length was released early last year via Nuclear Blast Entertainment. Recorded in North Carolina with longtime producer John Custer, the record marks the first studio recording with vocalist/guitarist Pepper Keenan in over a decade and, earning the #67 spot on the Billboard Top 200 Chart, #12 on the Billboard Top Current Albums Chart, and #3 on the Top Hard Music Albums Chart upon its first week of release, is the highest charting album of the band’s career. Champions Decibel Magazine of the release, “The record is filled with the kind of Sabbath-meets-Black Flag-meets-Lynyrd Skynyrd jams that were so infectious and wildly influential back when Bill Clinton seduced interns…COC doesn’t try to change direction but instead revisits the approach that made the Keenan-fronted version so successful: powerful hooks, instrumental asides that will remind you of Sabbath’s ‘Planet Caravan’ and a rich use of textures and dynamics.” Added Guitar World, “from the thundering sludge-doom of ‘The Luddite,’ to the amped-up biker metal of ‘Cast The First Stone,’ to the heavy southern-boogie blues of ‘Wolf Named Crow,’ No Cross No Crown in many ways picks up right where the foursome left off a dozen years ago.”