As teased late last year, Static-X will head out on their highly-anticipated Wisconsin Death Trip 20th anniversary tour this summer, which will also serve as a memorial tribute to late vocalist Wayne Static. The tour will feature co-headliners and metal giants DevilDriver, and will also feature support from heavy mainstays Dope. The tour will begin in Tempe, AZ on June 18 and will visit over a month’s-worth of cities, coming to an end in Las Vegas, NV on July 27. 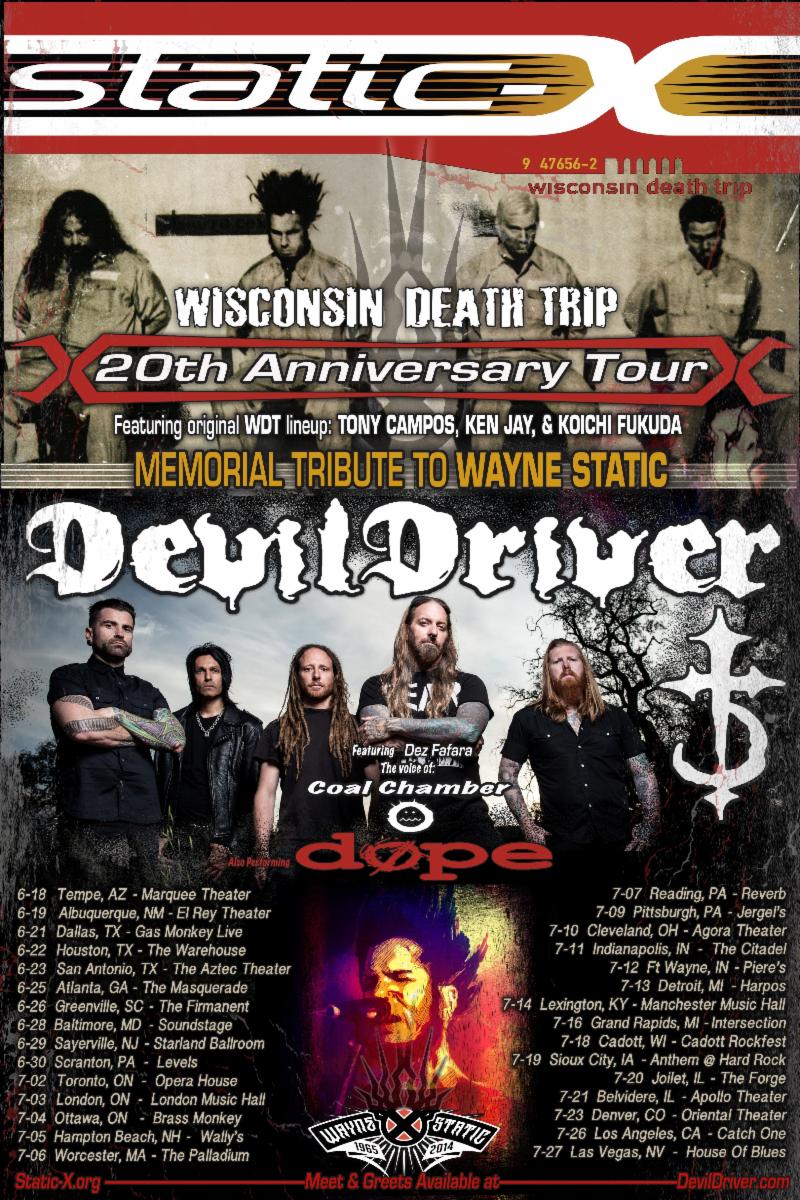 Tickets will go on sale via individual venues on January 24. Meet & greets are available now via Static-X.org and DevilDriver.com.

“Our intention is to pay ultimate respect to Wayne and to celebrate the music that has been in all of our hearts for more than 20 years,” says bassist Tony Campos. “It’s all about channeling the vibe from 1999 to the best of our ability and playing those classic Static-X songs live and loud.”

“Rehearsals have been awesome,” adds guitarist Koichi Fukuda. “The music and the vocals are sounding really great! I feel like Wayne would be proud.”

In celebration of this announcement, Static-X have revealed an exclusive promotional video for the tour, including a brand new clip of the band performing a newly-recorded version of their hit song “Push It”, featuring an unidentified vocalist.

“We understand that people are naturally going to want to know more about who is singing,” says drummer Ken Jay. “We have discussed this at great length and we came to the conclusion that at this time, it would be inappropriate for us to put the focus on anyone other than Wayne, Tony, Koichi and myself. It feels like the best way for us to celebrate Wayne’s legacy, along with the 20th anniversary of Wisconsin Death Trip, with all of our fans.”

DevilDriver frontman Dez Fafara says, “For those who don’t know, I am the one who first discovered Static-X back in the day in a small club in front of about 40 people! From that moment forward, I was and have always been a fan of what they do. It’s unique and will always hold a special place musically for me.

Co-headlining this first memorial tour is not only a way to pay homage to Wayne, but something I’m very excited to do. Static-X will be closing the show each night out of respect for Wayne. I’ll be there nightly, side stage, watching the unit do their thing with a big smile. I hope that Wayne will be there in spirit, watching as his brothers pay respect by bringing this music back to the fans that made the band so massive! I know he would have loved this!

Don’t miss out and grab tickets before these dates sell out! DevilDriver will have a full headlining set and we are throwing in some “surprises”, so get ready to get LOCO! If there was ever a time for me to break out Coal Chamber tracks, this would be the tour to do it on… we will also add new stuff from DevilDriver before our double record comes out in late summer! Come join us for the summer tour of a lifetime!”

On this tour, support artist Dope will also celebrate the 20th anniversary of their acclaimed debut album, Felons and Revolutionaries. “We are super excited to be part of this tour,” says Edsel Dope. “Dope and Static-X played hundreds of shows together back in 1999 and 2000, so it’s an honor to be able to run it back 20 years later.” 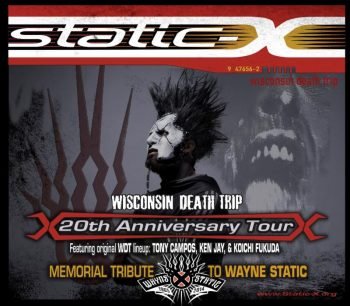 As announced, the original Static-X lineup introduced on their 1999 platinum-selling debut full-length album, Wisconsin Death Trip – bassist Tony Campos, guitarist Koichi Fukuda and drummer Ken Jay – have joined forces once again to release a new album, Project Regeneration. More information on the release of the new album will be revealed in the coming weeks.

For Project Regeneration, the band has cultivated a treasure chest of vocal performances and musical compositions left behind by Wayne. Along with the help of Static-X’s long-time producer Ulrich Wild, the band is in the process of completing their seventh studio album, which will feature between 12 and 15 brand new Static-X tracks.

Check out a new teaser featuring clips from a brand new music video, as well as five new Static-X tracks – “Road To Hell”, “Something Of My Own”, “Terminator Oscillator”, “Hollow” and “Disco Otsego” – along with a personal message from bassist Tony Campos about the inspiration behind Project Regeneration now at Static-X.org.

For the unfinished tracks, the band is inviting several of their friends to lend their voices for the completion of this very personal project. The guest vocalist curation process is being led by none other than SiriusXM programming pioneer Jose Mangin, who is working alongside the band as one of the executive producers for Project Regeneration.

Static-X has created a pre-order campaign allowing fans who purchase Project Regenerationin advance to have their name appear in the liner notes of the new album. Additional special pre-order package options are also available, including Project Regeneration merch bundles and several old school Static-X merch items to commemorate the 20th anniversary of Wisconsin Death Trip. Pre-orders are available via Static-X.org..