If you’re looking for a balance of garage-y energy and big production thatâ€™s wild, energetic, and perfect for a festival main stage, keep reading.

February 19, 2016 will mark the official return of Grammy-winning band, Wolfmother. The band will release their latest project entitled Victorious through Universal Music Group. It is the follow-up effort to the band’s 2009â€™s Cosmic Egg and 2014â€™s New Crown. Andrew Stockdale (vocals, guitar), Ian Peres (bass), and Vin Steele (drums) make up the large part of the current line-up for the band by certain accounts while others list Stockdale doing vocals, guitars, and bass with Joey Waronker/Josh Freese splitting drums for this CD. 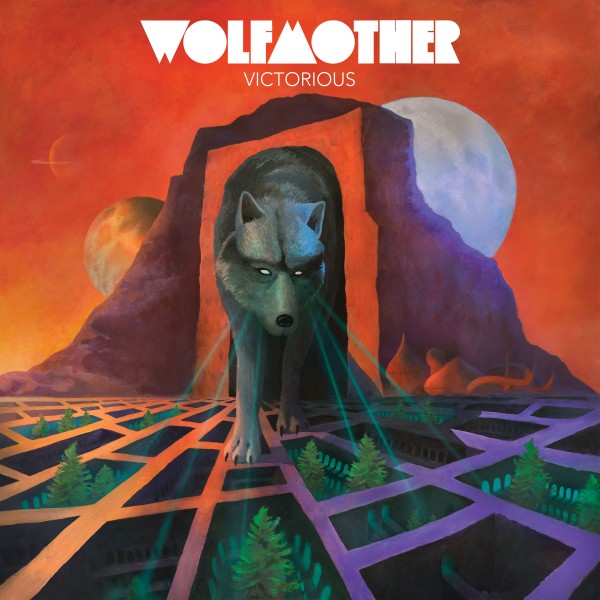 First formed in 2004 and hailing from the Land Down Under, the journey has definitely been a unique one. There have been a few roster changes throughout the course of the band’s history. However, the works of Jimi Hendrix have been influential in the works of Wolfmother, with lyrical references to “Purple Haze” in their song “Dimension.” While the guys have said they have been primarily influenced by 70s rock bands such as Uriah Heep, Budgie, Black Sabbath, and fellow Aussies AC/DC newer acts including The Avalanches, Radiohead, The White Stripes, and Kings of Leon also are given the nod to Wolfmother’s sound.
Other places given credit for consideration go to Pink Floyd, The Beatles, Led Zeppelin, and The Who. Andrew has also listed The Doors as a major influence, stating they were one of his most treasured bands growing up.

The second track off of the new release is also one of the three single releases off of the Victorious: “Victorious,” “Gypsy Caravan,” and â€œCity Lights.â€ All of the songs were recorded at Henson Studios in Los Angeles, CA with two-time Grammy-winning producer Brendan Oâ€™Brien of Pearl Jam, AC/DC, Chris Cornell, and Bruce Springsteen experience.

â€œBack in the early days, Iâ€™d play guitar, bass, and drums and then present the ideas to the band and weâ€™d work on the arrangement together. I thought it would be cool to get back to demoing ideas by myself and playing everything. Itâ€™s a good way to do things because it can make the style more cohesive.â€ ~ Andrew Stockdale

“Gypsy Caravan” is an infectious song that one can almost imagine Robert Plant singing if this was 1976. Regardless of who might have done the drumming on what song either Josh Freese of Nine Inch Nails, Bruce Springsteen, A Perfect Circle experience or Joey Waronker of Air, Beck, REM stops split drum duties and either/both made all of the tracks spectacular. Andrew has a very different vocal range than many in music at the moment but one of the closest might be Brandon Yeagley of Crobot. The arrangements are all done with an eye on his lyrical and instrumental craftsmanship.

His guitar play in either four or six string varieties gives you that throwback feel to the beginning of the Black Sabbath days. The vocals of Stockdale are clean and will change the decor of your living room into something from That ’70s Show before you realize it. If the live version of this song along with the others from this album are as good as what we’ve been listening to at the National Rock Review compound, fans are in for quite a treat.

If you have been a Wolfmother fan from the beginning, get the new album. If you recently stumbled on Wolfmother, get the album. If you want some music with great guitar play, great singing that you can understand, and drum play you can swing along with waiting for the light to change, get the album. The record might not be for all listeners but if you give it a whirl or two, it might grow on you like yellow wallpaper in the kitchen.