The hard rock/alternative band releases their latest album as a posthumous honor to their late frontman.

The Feisty Piranhas are an alternative band from Ventura County, California. Their sound is fast paced, upbeat, driven rock n’ roll, reminiscent of Goo Goo Dolls, No Doubt, Green Day, and Bush. The Feisty Piranhas musical influences show through on their most recent album, Evil Monkey, including hard rock, punk, classic, rock, ska, and reggae. This is the perfect sound for a band known for great live performances based in Southern California.

Evil Monkey includes 12 tracks, with many standout tracks. The title track, “Evil Monkey,” is one of the heaviest songs on the album. Tight guitar work with an almost trashy rhythm line compliments quick, steady clip of the drums. This intense progression breaks form and gives way to an almost pop-rock sounding chorus. It segues back to the rhythm and into a solo fit for any metal band. 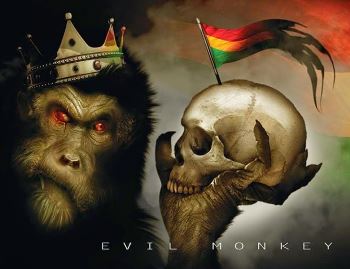 The lyrics for “Evil Monkey,” like the rest of the album, are thoughtful and introspective. Alex Lust III encourages us to take charge of our lives, our world, and our future rather than relying on superstition. The song warns us of a potential future where we bring about our own end. Those who assume it predestined must face reality; “this was not an Armageddon, this was a rising up of hate.”

In “Change The World,” the mood lifts with a message of hope and optimism. This song is more pop-rock than some of the others. It is made for commercial airplay and has a sing-along quality. As put in the lyrics, “We will always sing our songs, we can hear them loud and clear, we’ll change the word one day at a time.”

“Apologies” is a pop-punk anthem that could fit in a Green Day album. The lyrics are an internal reflection on guilt and regret from a person struggling to reconcile their mistakes while seeking redemption.

Starting out with the strumming of an acoustic guitar, “This is Her” is right out of the 90s alternative scene. Clean guitar, harmony vocals, and a reggae break complete with horns. Again, another song written about soul-searching; “every time you close your eyes, remember choices that changed your life.”

The album taps issues of political will in “Environmental Cancer Political Disease.” The lyrics discuss the apathy of a populace who choose not to “look away as out children start to fall.” This could be an allegory to the political climate today, where people feel disenfranchised by their elected government. The music possesses clear roots in the alternative sound of the 90s.

“Show Me A Free Man I’ll Show You A Fool” is a fun, upbeat song with a serious message. The melody is hard rock and reggae. What starts out as a potential party song yields to lyrics of self-reflection, of one struggling against the status quo. “Remove the thorns of a failed promise, remove the stakes that let you feel your death.”

The production quality of the album is good, even great. The vocals are clear and up front in the mix. The guitar tone is crisp and well-defined. The bass is present though it could do to stand out more. The drums sound strong; the clip of the bass is obvious, the snare clear, but the cymbals are not as bright as they might be. Still, minor details. Overall, the Feisty Piranhas are an indie band which have released an album that sounds better than many signed artists.

Given Evil Monkey is the final work of Peter Lust III, the album is a fitting musical legacy for him. It is a solid album, to which the only disappointment being that he is not with us to enjoy seeing it completed. Rest in Peace, Peter. And thank you for a fine album.