The alt-rockers from the Big Apple unveil their latest work, the final installment in The Equinox EP series, which premieres on Monday 4/25, exclusively on National Rock Review.

New York City-based The Black Atlas are unveiling a new EP this Monday, April 25. The new release, Equinox, covers three new tracks, “Salt Circle,” “The Master,” and the title track, “Equinox.” At 13 minutes exactly, the band packed a lot of music into a small release.

Equinox is dark, sultry, and dirty like the streets of a large city. 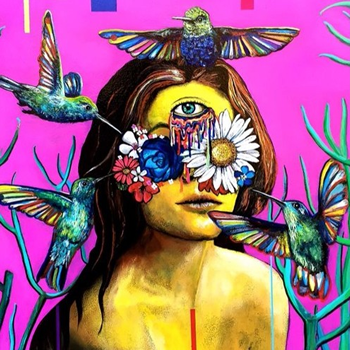 “Salt Circle” starts slow, quietly, as if wandering in from nowhere. Ambient tones, echo and reverb, introspective, restless, and wayward; this is the music of a worn out soul. “I have walked so far and climbed so high. “I am wearier, wearier now,” goes the lyrics. Apropos for the music which builds gradually in intensity. The way it began, so it ends fading slowly into the silence.

With a palpable jazz influence, “The Master” is an exceptional track. Keeping with the brooding feel of the first tune, a saxophone and bass walk us through the musical landscape as words float to the steady, subtle rhythm. The song conjures visions of a dark club, a band in a smoky room, musicians jamming as the sax player leans back, cheeks puckered, playing with raw emotion.

“Equinox” closes the release and The Equinox trilogy. Gentle, soaring vocal harmonies accentuate the guitar of this number, both somber and uplifting.

The album, in all its intricacies, begs the listener to find Equinox I and II. The musicianship is superb and the composition, complex. It is hard to listen to this EP and take it all in on a single listen. Headphones may even improve the listening experience; it is that kind of music.

Equinox was written and performed by Peter Koronios. The EP was produced and recorded by Jesse Clasen (Foreign Air/ex-HRVRD). The album also includes guest performances by Clasen as well as Ally Hoffman (MTHR), and Ian Hendrickson-Smith (The Roots/Tonight Show Band). The EP artwork is by Colin Frangicetto.

The Black Atlas are releasing Equinox on Monday, April 25, in an exclusive premiere only on National Rock Review. Check back here on Monday or follow the band and us on Facebook and Twitter for more information.