With a thunderous bang, Tommy Marz comes roaring back to the world of rock and roll with his latest release, Bringing Alpha.

After playing for over a decade with his rock band GoToZero, Tommy Marz recorded his first solo album a few years ago which he intended to be a one-time creative experience. Quite often, pop artists will have a desire to record a rock nâ€™ roll album after years of recording pop records. But with Marz, it was the other way around. After years of writing, performing and recording predominately rock music, Marz decided to take a softer approach with his first solo album Rival.

Marzâ€™s cover of George Michaelâ€™s â€œFaithâ€ spawned a video that went on to gain over a hundred thousand views on YouTube and received placements on cable networks, such as NBC and MTV. Marz thought there was a market for that style of music and decided to record a follow-up album: Play. Listen. Rewind. Repeat. The 2013 record contained the single, â€œA Kid in the 1980â€™s,â€ and placed at #17 in the SDC Radio Networks top songs of that same year.

Now, along with two members of GoToZero, Jason Tucker, and Chris Alef, Marz is ready to return to his Rock and Roll roots. Collectively known as the Tommy Marz Band, they have been hard at work putting the finishing touches on their newest album, Bringing Alpha, which has the melodic sensitivity fans have come to expect but with an overall harder rock sound. 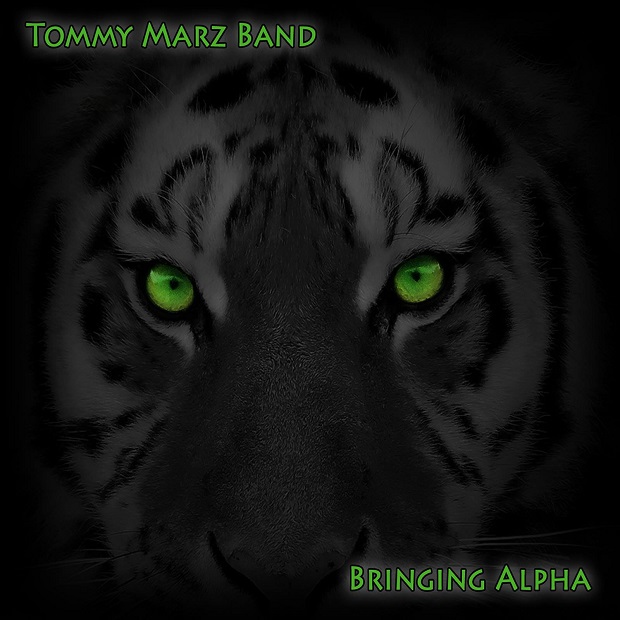 We start with â€œBorn To Follow,â€ and if this song wasnâ€™t written by one of the nineties grunge acts, it certainly sounds like it was. Pure old-school alt-rock that stomps and thrashes. It has a distinctly dark feeling overall, certainly not a song of happiness by any stretch, but it still left one feeling euphoric, if only for the nineties music lover in them. True, itâ€™s a retro feeling song, but no less powerful for that.

â€œRoad To Nowhereâ€ comes next. It starts out quicker than â€œBorn To Follow,â€ but then with a three-hit drum accent, the song slows tempo even below the previous track stomping around just like an elephant in a field of grass. One hears the anger in this song, much more than the previous track, and it feels aggressive as hell. Not nearly the throwback feeling of the first song, it nonetheless has a distinctly grunge-rock feel as well.

â€œSpace In Timeâ€ is much more up-tempo than either of the previous tunes, and this time stays up there. Much groovier and hoppy than weâ€™ve heard up to this point and the ride-cymbal accents really make the verses sing, not to mention the superb harmonies throughout. During the chorus, we are introduced for the first time to Marzâ€™s growly new vocal style, and this will not be the last we hear of it, either. The highlight is the extra-long chorus accent piece during the second chorus where Marz screams â€œComing Home!â€ A powerful sounding song making it a definite highlight.

Another departure from whatâ€™s expected, Marz takes a whispery, nasty whisper for the verses in â€œRoom With A View.â€ A slinky and mean feeling tune, lots of fun to listen to. Intriguing is the bass guitar during the bridge and solo. It sort of cascades up and down like hills on a roller coaster.

â€œOne Big Rushâ€ comes out of the gates screaming. Literally. Here again, Marz has completely abandoned the pop influences of his earlier sound and goes balls-out full-on slap-you-in-the-face rock (with maybe a brief pause to masquerade as a circus announcer). About halfway through, Marz descends into a bouncy bridge with some of the best harmonies youâ€™ve heard. Captivating. Then comes the solo that just shrieks and soars. I only wish the outro was longer.

â€œSuper Overloadâ€ is a song to ponder, and ponder one does. Itâ€™s at times sludgy and dark, poppy and light, and captivating musically. Marz goes from a stoner-rock intro guitar with weirdly melodic vocals over it to one of the most euphoricÂ choruses youâ€™ve heard. One can almost feel the â€˜super overloadâ€™ just letting that chorus melody wash all over them. The solo comes in after the bridge, and itâ€™s fairly simple and musical, carrying its own individual melody over the stoner riff, then goes back into a third chorus, but changes up the vocal melodyâ€™s meter a bit, emphasizing the first line more.

No idea whom this song is about but pretty much all the anger Marz has is brought front and center on â€œCommon In Disguise.â€ Over top, a great bouncy bass guitar melody, Marz berates this person (or people?) and gives them whatâ€™s coming to them. Rage and hostility donâ€™t make an appearance here, as Marzâ€™s anger is very tightly controlled, almost methodic, and he even pauses during the bridge to try to sweet talk some sense into them. This song, like so many others on the record, is somewhat shorter than what one expects. An extra chorus or something after it would have been a nice added touch.

â€œStarâ€ is a song Marz has had out for some time now which the band even filmed a music video for. Although not exactly new, it remains one of the standout tracks on the album. It was smart for Marz to include it on this album even though it was previously released as a single. This song is very easy to embrace. It has an amazing groove to it and the guitar work is some of the best on the record. The bass guitar, when it drops an octave for the verse, just carries the song along, and with that noodling flange guitar on top, itâ€™s icing on the cake. The half tempo last chorus complete with harmonies, not only makes this musical and enjoyable but a great radio rock tune as well.

â€œChasing The Tigerâ€ is a bit of an anomaly. Upon hearing â€œOne Big Rush,â€ one might think they had been exposed to the extreme end of Marzâ€™s songwriting breadth, but this one breaks the mold. Like nothing else on the record, â€œChasing The Tigerâ€ closes the album out with a surprisingly unique feel. Itâ€™s at once jamming and pulsing, and at the same time coming at you from odd angles, yet nothing competes with the guitar riff during the chorus. A beautiful end to a much-too-short record.

Eschewing the previously explored territories of pop, Marz turned his songwriting to heavier, meatier rock and roll, and brought the entire attitude that comes with it. Although every song on this album is a keeper, definite stand-out tracks are â€œSpace In Timeâ€ and â€œStarâ€ for their wonderful pop sensibilities and rock which Marz blends together in perfect unison, and also â€œOne Big Rushâ€ and â€œChasing The Tigerâ€ for breaking the mold of typical hard rock and grunge tropes. These last two mentioned songs are definitely the heaviest tunes on the album. They are surprising yet familiar, all at the same time.

Not sure if credit goes to the recording studio, the producer, the mixer, or even just to the band themselves, but Bringing Alpha has a great sound to it. You can hear every individual instrument distinctly clear while blended together perfectly with Marz’s vocals. Whoever sat behind the board for this recording definitely knows how to bring out the best in this band. There isnâ€™t a second of beta on this record anywhere. And just like an alpha, the record comes in hard and kicks you around a bit, then leaves you lying on the floor wanting more (though whether itâ€™s for mercy or for more, weâ€™ll leave it up to you to decide).