Mark Tremonti returns with the eagerly anticipated companion album to his 2015 release, Cauterize.

Grammy award-winning Mark Tremonti is best known for his work as the lead guitarist with both Alter Bridge and Creed. Back in 2012, Tremonti decided to spread his wings and branch out. He teamed up with long-time friends and fellow musicians Eric Friedman (guitar) and Garret Whitlock (drums) for his debut solo album All I Was. The album was also Mark Tremonti’s first as lead vocalist. Wolfgang Van Halen completed the band’s lineup on bass shortly thereafter.

Following the release of 2015’s critically acclaimed sophomore album Cauterize, Tremonti is back with the follow-up/companion album Dust and boy does he mean business. Straight out of the blocks, Tremonti hits us hard with the ferocious triple whammy of the hard and heavy “My Last Mistake,” the frantic “Once Dead,” and “The Cage,” which has a euphoric quality reminiscent of “Metalingus” from Alter Bridge’s One Day Remains album. The latter will undoubtedly become a future fan favourite. 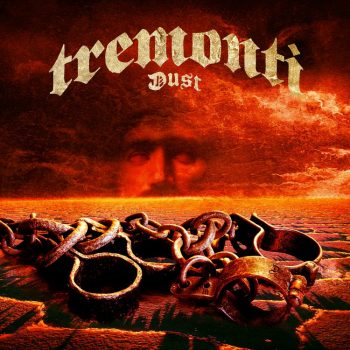 One thing apparent is that Tremonti’s latest offering is as heavy, if not heavier, than the last. He has cut loose with fast guitar riffs, which will whip the fans into a frenzy when performed live. That speed is complimented by the furious kick drum groove of Garret Whitlock. As you would want and expect, the album features a myriad of Tremonti’s fine solos with Mark’s melodic vocals adding balance to the heavier elements.

The title track, “Dust,” has received significant airplay on the likes of Planet Rock radio. It is a nice change of pace on the album and slows down the proceedings. With “Betray Me” and “Tore My Heart Out,” there are those familiar Tremonti riffs that every fan knows and loves. Again, “Catching Fire” is another steamer, with a great melody. The beautifully heartfelt number, “Unable To See,” closes the album, adding texture to the record, and highlighting Mark’s phenomenal vocals.

Not only does Dust feature an abundance of passionate playing from Mark and company, but that same passion is also highly evident in his songwriting. Dust will inevitably be one of the albums of the year. It is being released via Fret 12 Records on April 29th.