Polymath guitar player Gary Moore knew no musical boundaries as he adapted to various styles like a duck taking to water; whilst also surpassing normal expectations about how a guitar can sound.

When he decided to turn his full attention to the blues, he re-defined and popularised this genre for many as he took his ‘rock fans’ along with him on a masterly guitar ride of a lifetime. This superbly assembled Blues and Beyond box set release concentrates upon his blue period with the choicest of cuts hand-picked from Moore’s blues recordings. Furthermore, it is presented with enough associated paraphernalia inside to delight his true, diehard fans. 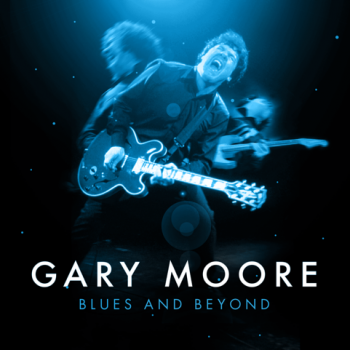 In fact, scoring his biggest sales success with blues album Still Got The Blues pretty much dictated the musical path that he would thereafter tread both live and in the studio. As this lovingly assembled release showcases the best of Moore’s blues recordings, the first 2 CD set focuses on Moore’s studio recordings. It is clearly compiled with a passion, showing-off Moore’s definitive supercharged blues playing. Just listening to a whirlwind version of “Stormy Monday” and a steroidal “Power Of The Blues” reminds of this much-missed guitarist’s terrifying finger speed and strong frontman vocals.

However, the gem also dwelling inside this treasure trove box set is a previously unreleased 2CD live performance. Anybody who witnessed Gary’s live shows will not be disappointed with his incendiary takes on classic blues covers and his own live set staples. Be prepared to be taken on a blues odyssey by this inimitable ultimate guitar-slinger extraordinaire.

This box is the ultimate collection of Gary Moore’s blues output and beautifully documents the evolution of a true guitar legend.

Blues and Beyond is released on double CD, 4 LP and as a box set, which includes unreleased live recordings and the official Gary Moore biography I Can’t Wait Until Tomorrow written by Harry Shapiro on 24 November 2017.

Box Set: comprises the blues studio recordings on 2 CDs plus a further 2 CDs of newly mixed and mastered live concert recordings, with two previously unheard song versions. This is the first time that this concert has been available, anywhere. Also included, is the brand new book I Can’t Wait Until Tomorrow, which offers a unique insight into the world of Gary Moore. This full-length Gary Moore-authorised biography is new, unreleased and all you need to know about the man behind the guitar. For the true collector, included are a number of reproductions of ultra-rare memorabilia items including a concert ticket, album launch event invite, VIP wristband and AAA pass.