On Tour in the U.S. with THE PRETTY RECKLESS and HEAVENâ€™S BASEMENT Now 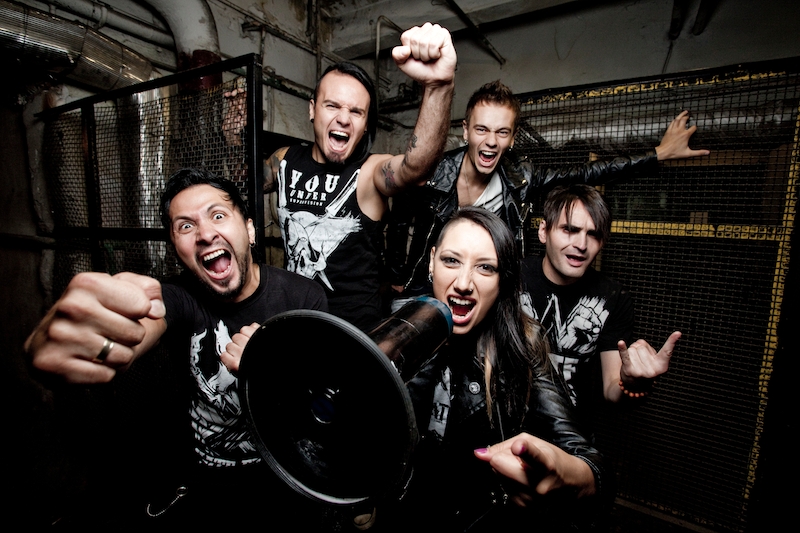 Official statement from LOUNAâ€™s management team:
LOUNAâ€™s inclusion in the forthcoming MTV documentary series â€œRebel Musicâ€, set to air in November on MTV, has been cancelled by Viacom due to international pressure from Russia.  In a letter to LOUNAâ€™s management, the producer of the MTV series, Raeshem Nijhon, expressed her disgust for the decision and explained that LOUNAâ€™s removal from the series was the result of pressure placed upon MTV Russia from unknown sources.  The genesis of this pressure, according to her, was due to the airing on the last VMA awards of a Pussy Riot clip.

LOUNAâ€™s song â€˜Storming Heavenâ€™ was selected as the title theme music for the entire documentary series.  The trailer includes images of LOUNAâ€™s sold out concert in Moscow in October of 2012 as well as of front woman Lousine Gevorkian.  Signs counter to Russian governmental policies can be seen in this trailer as well.  The original trailer indicated a 7-part series featuring seven countries around the world where musicians are making a stand against government oppression.  Now, however, LOUNA and the entire Russian episode has been cut.

This episode was described by its producer as â€œthe crown jewelâ€ of the documentary series, stating in an email to LOUNAâ€™s management, â€œwe have been forced by Viacom to replace our Russia episode with a different piece.  We haven’t been given a lot of explanation but I am speculating this is in response to major pushback Viacom experienced after showing a short Pussy Riot clip last year at the VMAs.  The irony of this situation is profoundly disturbing and I wanted to share this with you right away.  I’m truly heartbroken and incredibly disappointed.â€

LOUNA front woman Lousine Gevorkian said of this situation, â€œthis is just more proof of what we have been trying to tell people about for years with our music.  When we finally get an opportunity to have a worldwide forum for our situation it is clear to me that the Russian government really will do anything to hide the situation from the rest of the world that exists for us as a part of our daily lives.  This is a purely political decision that has nothing to do with music and everything about information control.â€

More information on the bandâ€™s involvement in this documentary and this on-going situation will be disclosed when available.

LOUNA is recognized internationally as a musical voice positioned to oppose tyranny and question the world, so the enlightening message in the bandâ€™s latest single, â€˜Up Thereâ€™, comes as no coincidence. The music video for â€˜Up Thereâ€™ was premiered via VEVO earlier this month. Take a look here: http://vevo.ly/oGRIwL

LOUNA is currently out on their first U.S. tour with The Pretty Reckless and Heavenâ€™s Basement. See below for all confirmed tour dates:

No other rock group from Russia has exploded onto the music scene quite as rapidly as LOUNA. Their first English language album, Behind A Mask, was released on April 30, 2013 via Red Decade Records and MEG/RED.  Frontwoman Lousine Gevorkian was named the best female rock vocalist in Russia in February of 2013 at the annual Nashe Awards, the closest award show in Russia to the Grammy’s or American Music Awards for rock musicians. She was nominated for the same award the year before.

LOUNA are the most commercially successful rock band of the modern protest movement (of which Pussy Riot has become the most internationally renowned). After the release of their first EP, which lyrically focused on the many modern social problems that exist, they were quickly named the 2009 Best New Artist of the Year at the annual Russian Alternative Music Prize (RAMP) awards. They released their first album, “Let’s Get Louder” in December of 2010, selling out every venue during their first national tour of Russia supporting the album. Two singles, “Fight Club” and “Let’s Get Louder” reached #1 on the Russian radio charts, with “Fight Club” remaining in the top 10 for a record-breaking 16 weeks and also being named the 2011 Rock Song of the Year at the annual Nashe Awards. Along with this, LOUNA was nominated for Breakthrough Artist and Solo Performance of the year. “Mama,” their first single from their February 2012 album, “The Time of X”, went straight to #1 on the Russian radio charts.

LOUNA has performed on the main stage as a headliner at every major festival throughout Russia, and is almost universally considered the most in demand young rock band in all of the Russian world.  They have played in Russia with numerous international artists such as Limp Bizkit, Billy Talent, Paramore, The Killers, Bullet for My Valentine and many others.  In early 2012, they were invited to perform as one of the main headliners at the 50th-birthday concert festival honoring Russian rock legend Victor Tsoi of the band KINO, playing to audiences of over 15,000 people in both Moscow and St. Petersburg.