Well, ok, Westland. Fine. You win. Are you happy now? ANSWER ME!

Sorry for yelling. Let me get that out-of-the-way right off the bat. I keep forgetting that youâ€™re not right in front of me, like a loyal legion of diary-reading robots.

So the homecoming show! We were looking forward to this one, our home turf, familiar faces and all that business. Not to mention the luxury of getting to sleep in our own beds for a night right in the middle of the tour. None of us realized quite how tired we were until we hit our own beds. Holy sweet fancy Moses, having a steak dinner in a posh downtown establishment, did I sleep my face off.

Fun fact: When touring and systematically replacing audience membersâ€™ nervous systems with Folgers crystals, you run on adrenaline most of the time. Four hours of sleep has been the norm, and itâ€™s been fine, as long as there’s a show to play. Until laying down at home. Then I realized I was SUPER TIRED and crashed like the f&$king Titanic getting pushed off the Empire State Building.

Enough about sleep! The Token show was upon us, we got a nice sound check, and we got to hang out with a ton of really good friends and family. I mean, maybe it wasnâ€™t fully a ton, I didnâ€™t weigh them. That seems a little on the creepy side, not to mention potentially insulting. What the hell is wrong with you guys asking me to do something like that? Man. It was a lot of people, ok? Good enough? Sheesh. 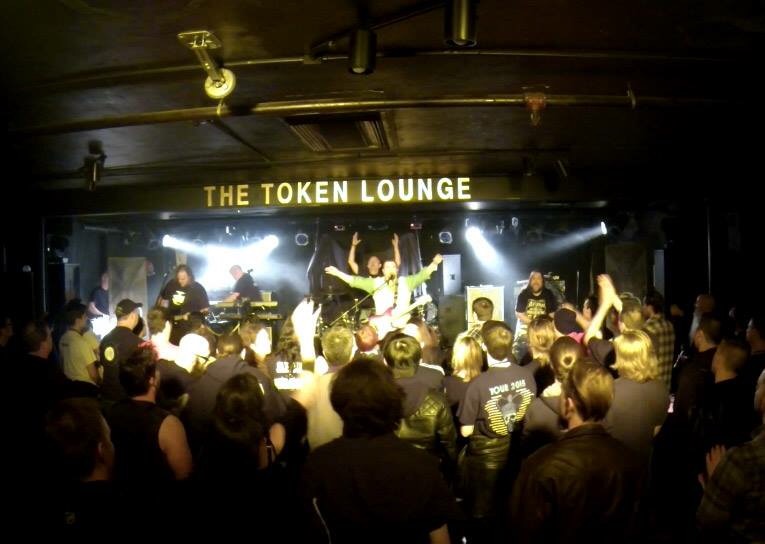 Anyway, we rolled into town firing on all cylinders, so this was a pretty good show with low stress, performance-wise. As far as what else was of interest, other than the playing and the music and the goings on and the what-soâ€™s, our homecoming show turned into something of a party on the â€œtour busâ€ afterwards. Many of you reading this may have been there, actually.

Seriously you guys, this was the most fun after-show night so far. Having a bunch of friends on the RV to drink with us, laugh, listen to music, etc. was great. I had my wife there, which was the best part for me. If youâ€™ve seen her, you probably know why. Heh heh.

Seriously, though, getting to share a tour bus party with my best friend was an over the top treat for me. Also, several of my – and the band’s – favorite people showed up. Ryan (The Mayor) and his wife Heather, Rahm (ISDâ€™s lawyer – Iâ€™m serious), Tony from Battlecross, (probably one of the coolest people on this or any planet), Abigail (the most generous and enthusiastic friend this band has), Jarrod and Kari from Reign (who played the show with us and KILLED), along with several others who were in and out, donâ€™t get mad at me for not going down the list of names, this is already getting boring for people. Know when to let go. Everyone there knows who they are, and they were invited because they kick ass.

Basically, this was the feel-good night of the tour. If you missed it, I hope itâ€™s because youâ€™re coming to another show in a different city, or youâ€™ve already been to a show and seen us. In that case, I wish our RV was big enough for all of you. That would be a party!

Wait, let me think about that one. That would be pretty crazy. And I have no idea where weâ€™d park it. Holy crap, can you imagine navigating a big city in that? Maybe if it had, like, helicopter blades and we could just set down on top of a building or something, or in a field. Oh, that would be so coolâ€¦ flying into cities like a giant RV-copter-saurus thing, scaring the kids and old people, with fire shooting out of the front, and maybe someâ€¦ sorry. I got carried away. Probably that whole lack of sleep thing from the beginning of the story. It happens. Stop picking on me.

The last thing I want to mention is that this was the fourth and last show that Next to None played with us on this jaunt. We got to know them pretty well, and not only are they a great band, theyâ€™re really cool guys. I have a feeling weâ€™ll be seeing them again soon enough, hopefully, some more shows together down the road. Seems like a good idea to me!

Next stop, Chicago and one of our favorite venues, Reggies!