Made in Detroit isn’t only a slogan for cars. WhileÂ the cityÂ is universally known as Motown, new music, of a slightly harder edge, is also starting its export to the masses.

If you were to take a hefty pinch of Dream Theater, mix it with a dash of Megadeth, threw in a splash of Pantera for flavor, and at the last minute added just a sprinkling of The Offspring you would get the guys in Imminent Sonic Destruction. Recipes may vary to the individual listener, but the latest LP, Recurring Themes is a wonderful appetizer for the rumored second album promised to be coming soon.

According to the lore of the band, in the city with an affection for cat mascots, they were originally known as mellotrÃ¶n, when they formed in 2007. Although, their debut album was self-released in 2012, under the current name. It was produced with the guidance of Roy Z, who is known for other acts such as Bruce Dickinson, Rob Halford/Judas Priest, and Sepultura. Coming in at just shy of an hour and fifteen minutes long, the nine track release hasÂ a wide range indicative of the band’s many influences and complex style. 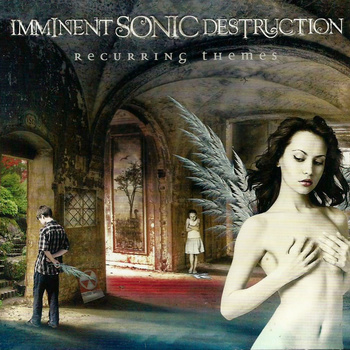 While the band may self advertise as “Progressive Super Metal,” they have a somewhat unique vibe all of their own. From the intriguing album art of Man In The Mountain Creative Design, to the song lyrics and music arrangements from the LP, I.S.D. shows both the current fans, and the ones to come, that they walk to a different, slightly upgraded log keyboard sampling. All of the experiences from other projectsÂ each of the members previouslyÂ worked withÂ can be heard on this offering.

The band is able to stay melodic, yet drop a guttural scream, such as on “Driving Home” without missing a beat. You are easily capableÂ of feeling the bass grooves on “Monster” from Bryan and if you closed your eyes, the beast under your bed might be playing the drums of the nine hells, to Pat’s style on the skins. Pete’s keyboard duties are clear and don’t need the severe, over processing or other common gimmicks, to get the most out of the songs. Don’tÂ forget the integral part of the sound coming from this five piece, is Tony and Scott’s ability to play more difficult guitars for added distinction. Given that Tony also throws in clean and focused vocals for all of the tracks, it definitely shows the high level of musical ability within this group.

If you are curious to hear the boys live, they are holding a very special show Saturday, Jan 24, 2015 at 7:00pm at The Token Lounge, Westland, MI. The “Heavy Metal Bake Sale” show is sure to be full of debauchery and mayhem. Cookies and cake may be optional at this show. If anyone stops out to see them, let us know what you thought of the life altering extravaganza.