Slash, Sammy Hagar, and many other hard rock heavyweights will team up for a wonderful cause set to take place in San Francisco next week.

The amazing benefit concert for The Dolphin Propaganda is drawing near. The benefit being held at the Fillmore on July 29 and features super-group rockers, Kings of Chaos. We spoke with Yoav Ben-Shushan whoâ€™s leading this event to raise funds for Ric Oâ€™Barryâ€™s Dolphin Project.

NRR: What we would really like everyone to know is about the incredible cause that the concert is being held for. How did you get started with the foundation?
Yoav Ben-Shushan: I met Ric Oâ€™Barry who runs the Dolphin Project while I was living in Japan two years ago. Heâ€™s such an amazing guy. I was blown away by the work heâ€™s doing and the terrible experience of the dolphins that are being rounded up and sold or killed in the cove in Taiji, Japan.

Since the movie “The Cove” was released and the world started paying attention, things have really changed, especially in Taiji, Japan. The local fisherman and police do a lot to hide the massacre from the world. I knew I had to do something to raise awareness and make sure dolphins and all marine mammals are treated like the super-intelligent beings they are. There are new battlegrounds such as the Solomon Islands and travel circuses in Indonesia that needs attention as well. 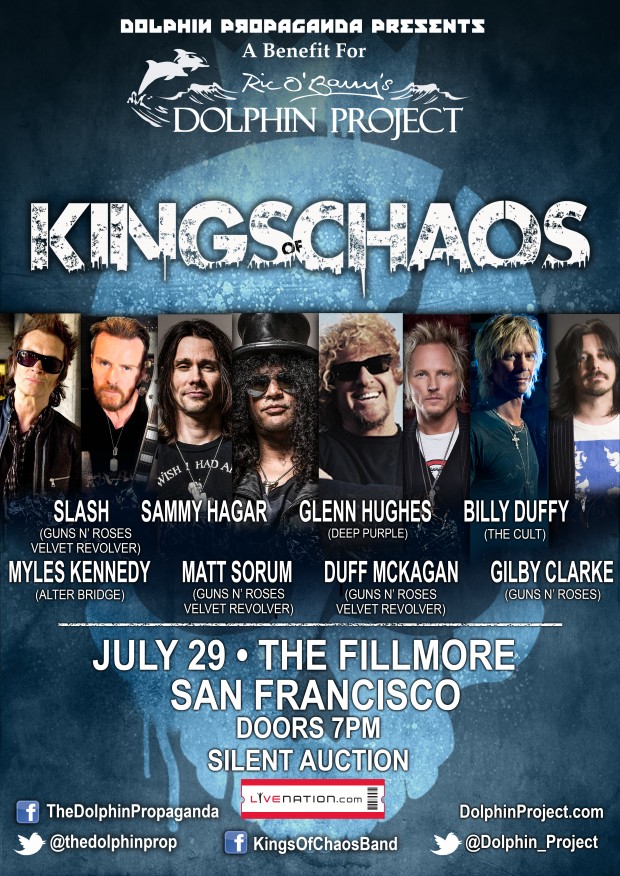 NRR: Can you tell us about The Dolphin Propaganda?
Yoav Ben-Shushan: The Dolphin Propaganda is a group of ten friends in San Francisco who are concerned about the state of our oceans. One night we got talking about what we would do this year that weâ€™d remember for the rest of our lives. Iâ€™d already told them about what Iâ€™d seen in Japan and we got talking about whether we could actually do something to help Ric.
We figured we could do something to really raise awareness for what is going on in places like Taiji, Japan and the Solomon Islands and other places around the world. Our focus is on ending the demand, where dolphins, whales, and other mammals mistreated by SeaWorld or held prisoner by resort hotels so tourists can swim with them. Thatâ€™s how The Dolphin Propaganda was born.
Plans for the event started to come together when we connected with Matt Sorum, head of Kings of Chaos. Heâ€™s done amazing work for the dolphins through his music, his time, and his non-profit. Iâ€™m so humbled that he and the Kings of Chaos are donating their time and their music for the cause. These guys are amazing!
NRR: Can you tell us about the dolphins in the captivity market?
Yoav Ben-Shushan: While I was in Taiji as a cove monitor for Ricâ€™s Dolphin Project, I witnessed a super pod of over 200 bottlenose dolphins being hunted down, held behind nets in the killing cove for five nights and six days, frightened, and starving for food. The selection process for captivity took six days. They were divided into small groups, young separated from old while witnessing how the marine mammal trade industry steals their babies.
It was hard to watch the rest of the pod hop with their heads out trying to understand what was going on. Their young were wrestled by divers (at least two died during this process), others got tangled in nets and were injured by the propellers of the hunter’s skiffs as they herded them towards where they are inspected by trainers. The total of young bottlenose dolphins from this pod taken to sell to marine theme parks around the world was 101 dolphins. On top of it all, 25 were slaughtered for their meat.
When the nets finally came down, there was a whole generation stolen from nature. Those who were released were too old for captivity. It was an amazing moment to watch the dolphins fleeing for their life in such a frenzy, trying to get away from hell. The next day the Taiji fisherman union took the day off from work. They had lots of money to count. Millions of dollars. A trained dolphin can be sold for $50k, and even higher in some cases.
NRR: What are some things that everyone can do to help support the cause?
Yoav Ben-Shushan: This entire nightmare business is happening so people can buy a ticket and take their kids to a dolphin show to watch them doing stupid tricks they would never do when they are free. Free dolphins donâ€™t put on funny hats or jump through hoops. They do it because they are hungry. They have been forced to learn to do it so they can be given food. They are all kept hungry so that they will cooperate with the trainers. The training process is another horrible story of brutality. Itâ€™s clear that the slaughter of dolphins will only end when there is no more market or demand for a dolphin show. It is that simple. Itâ€™s supply and demand.
Thereâ€™s one thing that everyone can do: Tell all your friends not to go to SeaWorld, Marine World, or to swim with dolphins at any resort hotel. Donâ€™t buy a ticket to any of these places. The change is not going to come from the government. Itâ€™s going to come from us not supporting corporations who train animals with starvation or keep them in chlorinated pools until they go blind.
We (DP) are convinced that photography, together with social media and live music events, could be a vehicle for political, social, and environmental change. I believe in the power of images to shape public attitudes and to raise awareness on issues that are generally absent from public discourse.
Oh, and if you live in the San Francisco Bay Area come to the Kings of Chaos show! July 29th at the Fillmore in SF.
NRR: We understand that there will be a silent auction the night of the concert. I can only imagine what incredible memorabilia will be available to bid on. Can you tell us about it?
Yoav Ben-Shushan: Yes, there will also be a silent auction of one-of-a kind music memorabilia which will start at 8:00 pm.

Stay tuned to National Rock Review for photos and a full recap of the show!