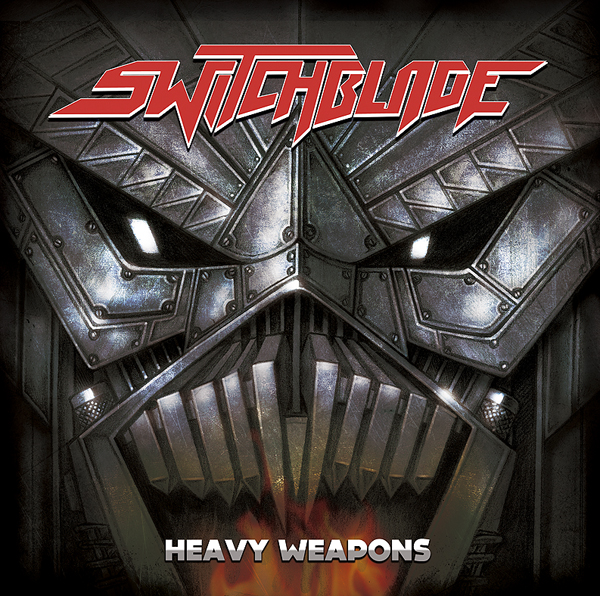 What do you expect from a band called Switchblade? Better yet, an album called Heavy Weapons? Well, the band’s name alone caught my attention, much like buying my first Motorhead album simply because the album cover (Orgasmatron) looked cool!

The modern music fan won’t understand this. This is a world of instant accessibility, one where a fan can find and listen to a band as soon as they hear of them. It was a cool thing, but at the same time, it was a bit of an adventure in finding new music. It was word of mouth and there was often the “gamble” factor when buying a new album.

From the name of the band and further, the album title, I expected something cool… I was right!

Switchblade has been around since 2005 and from Israel of all places. I myself had no idea there were metal bands coming from this part of the world, let alone a regional metal scene. Just goes to show how tight the blinders are wrapped on our heads here in America, even for a life long fan of Metal.

Switchblade is doing something I feel to be very cool. They are a modern band that embraces the classic metal sound of bands such as Iron Maiden, Accept, Judas Priest and many other iconic bands which have influenced countless musicians around the world.

Switchblade is not a tribute or cover band. They write and record their own songs but they do it to pay homage to what they refer to as, “80’s driven Heavy metal”. In fact, they nearly found themselves playing at the prestigious Waken Open Air Festival.

2013 saw the band release Heavy Weapons. The opening song is also called, Heavy Weapons. I am always skeptical of expectations based on a name. In this case, they hit the nail on the head because this song, starting with the very first notes…it is pure Heavy Metal! The riffs are exactly as they boast. Heavy, crunchy and raw. The double bass drums kick in, along with the bass, and it is really kicking ass.

At this point I ask myself the same question… “well, the music is great, but what about the singer?” No matter how great a band’s music is, the singer will almost always make or break a band. Ok, the vocals of Lior “Steinmetal” Stein kick in and I am really taken by surprise! This guy can really sing! I had read he sounds a lot like Bruce Dickenson. This is absolutely true. It’s quite uncanny how much he does sound like one of the greatest Metal Vocalist in history.

The following two songs are just as heavy, powerful, and straight up Kick Ass! There is no better way to put it. A Metal fan will know what I mean. These songs seem to have it all. Great riffs, catchy choruses, soaring vocals, and the solos… awesome. There are harmonies, melodies within the solos and outright shredding. It must be said that with all these things, they have great tones as well. Man, its all here.

Lost lovers Unite is the power balled here, but not in the likes of lame attempts at showing the “softer side”. Its more like something Iron Maiden would do; think Afraid to Shoot Strangers. It is very powerful, well written and the type of song that makes you really feel it.

In my opinion, every song on this album is great; there is no filler and it feels very true and honest. While I am not going to break down every song, I am going to give a huge Metal Horns shout out to these guys from a land I thought without Metal… Killer job!