When you can have fun night in and night out while giving the fans what they want, that’s call being on top of things.

If you didn’t already know, the Frederick, MD four piece of Neil Fallon (vocals/guitar), Jean-Paul Gaster (drums), Dan Maines (bass), and Tim Sult (guitar) makes up a successful veteran band of Clutch. They have just made it back from Australia and sold out shows in support of their latest record, Psychic Warfare. We managed to separate Jean-Paul from a frosty IPA long enough to get a few answers out of him about all things Clutch. We hit quite a few topics and he wanted you to know about a present from the band to all of you that consider yourselves fans. So read on, my children, and squeal with delight in the news.

On Saturday April 16th, the band will be releasing a special limited edition 12â€ vinyl release for Record Store Day. The album will contain two previously unreleased tracks from the Psychic Warfare sessions: â€œMad Sidewinderâ€ and â€œOutland Special Clearance.â€ These two tracks, specifically mastered for this vinyl configuration by Paul Logus, will be on side A. The reverse side will have a large scale etching taken from the Psychic Warfare CD booklet design created by Dan Winters. The jacket is hand numbered thick clear plastic showing the full art design, thus making this piece for Record Store Day 2016 a unique collectorsâ€™ item for all Clutch fans.

Catch the guys with Lamb of God and Corrosion of Conformity before they headline their own shows in June. A few of the first stops in May are listed before for your pleasure.

Head over to our Facebook page and click us a ‘Like’ or get your 144 groove on and get us on our Twitter page and let us know what you thought or who you want to see interviewed next.

NRR: Thanks for taking some time out to answer some questions for National Rock Review. What’s been going on with the band, Clutch, so far in very early 2016?
Jean-Paul Gaster: We just returned from four shows in Australia. This was a great trip down there. The fans are very passionate and the venues were fantastic. Warm weather and great food are also plentiful.
NRR: Your eleventh studio album is titled Psychic Warfare, and was released Oct 02, 2015. It’s said the concept of the album is influenced by author Philip Dick. What can fans new and old expect from the still very fresh material?
Jean-Paul Gaster: Psychic Warfare came just three years after Earthrocker so both records share some qualities such as very punchy production and upbeat tempos. I think we made a more dynamic recording with Psychic Warfare. The songs have a wider range of feel and groove. More funk and blues on Psychic Warfare I think.
NRR: You have a large selection of songs to pick from over a long career. How does a set list come together for you guys to balance old crowd favorites and the new material that you’re very proud of?
Jean-Paul Gaster: We developed a method back in the 90s where we take turns writing the set list each night. The order is Dan, Myself, Neil and Tim. This is alphabetical order of first name. It was a ridiculous concept at the time but it works to keep the shows fresh and ourselves attentive to the gig each night. The range of songs is wider and this makes for a unique musical experience from night to night. I donâ€™t know of any other band that does this.
NRR: At the time of this interview, you guys were in the Land Down Under. You’re doing a neat thing with a special run 12″ x 36″ screen print, how did that come about and will other places get their own print to grab at shows?
Jean-Paul Gaster: We are often approached by local artists to make show posters. We try to collect as many as possible and have many of them up in our Weathermaker headquarters.
NRR: We’ve recently lost a few big names in music starting with Scott Weiland and Lemmy to Bowie and Fry passing as well among others. Did any of those very talented artists have any influence in your own careers or are there any stories that would come to mind playing with any of them?
Jean-Paul Gaster: We toured with MotÃ¶rhead twice. Once in the UK and once in North America. Lemmy was the single most inspiring musician Iâ€™ve had the pleasure of seeing on a nightly basis. He played hard and loud until the very end. I intend to do the same.
NRR: With the mindset of the band being what it is, how much fun will it be to come back to the States and hit the road with Lamb of God and COC?
Jean-Paul Gaster: We look forward to hitting the road this spring with Lamb of God and COC. All three bands will bring something special to the bill. COC was one of the first bands I listened to when I discovered hardcore and punk rock. I think they are one of the most influential bands to come out of the 80s. They continue to release fantastic recordings. 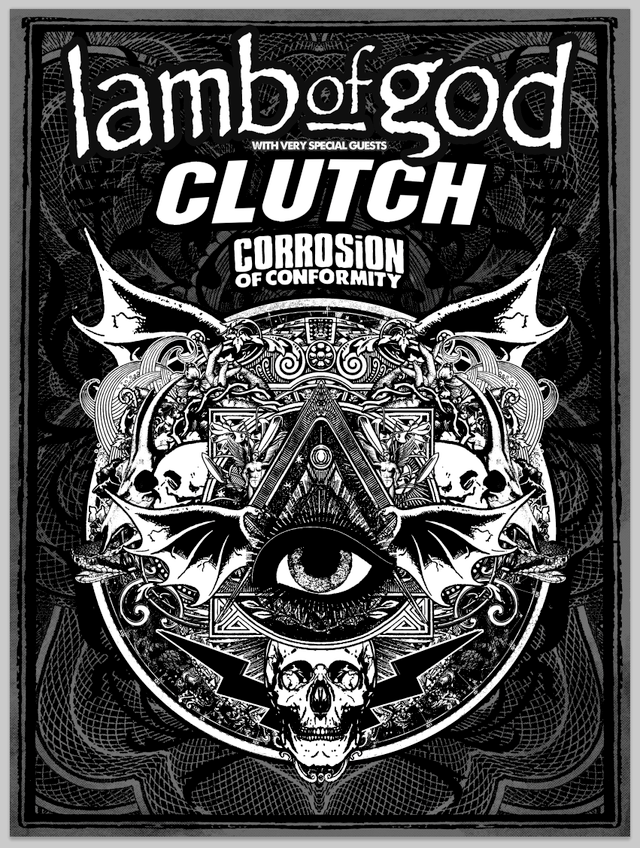 NRR: The Eagles of Death Metal recently returned to finish their show that was tragically interrupted in Paris. With you guys playing Poland, Germany, Australia among other foreign shores coming up, has your mindset changed as far as how you handle shows and security-related issues?
Jean-Paul Gaster: Outside of venues stepping up security not much has changed in the way that we conduct our business. We will play rock and roll as long as we feel like it.
NRR: More bands seem to be doing VIP deals on tour or really being creative with their merch like the prints. How important are these things for you not just as a revenue stream but as a way to stay connected with your fanbase and will you be doing any on your US leg(s)?
Jean-Paul Gaster: The touring industry is in tough shape right now. Travel expenses are up and lots of folks donâ€™t have money to spend on seeing live music. We do our best to keep ticket and merch prices down. We also do not take for granted that people will come see us play forever. We play each night as though it could be our last. I think this is also one of the things our fans have come to expect and appreciate.
NRR: Is there a moment, that thinking back on it now, in the your career, with the band now, that you can’t help but still feel a tad bit embarrassed about, makes you laugh about despite yourself, or just still makes you shake your head in disbelief? A Spinal Tap moment if you will, that you’d be willing to share with me?
Jean-Paul Gaster: Not too long ago I had a total Spinal Tap experience while on tour with in London. Our show intro music was running and I could not find the stage. Luckily one of the guys in the support band pointed me in the right direction. I made it just in time.
NRR: Do the big festivals like the Carolina Rebellion and say Rock on the Range, that are coming up soon, have a different feel to them when you’re in front of those fans?
Jean-Paul Gaster: The best part about festivals is being able to play for fresh ears. Whoeverâ€™s job it is to make the set list for that day always takes into account the venue, crowd and overall vibe of the day.
NRR: How does the group go through the writing process, is it all one person doing the lion’s share with help or is it a group effort from start to finish?
Jean-Paul Gaster: The writing process has not changed much in the last 25 years. Songs can take shape any number of ways. The key for us has been to stay away from a particular formula. One change is that I think we are more aware of how the vocals will be supported in the music now.
NRR: Having a twenty-five year career is a special accomplishment in and of itself. What would be one or two things the veterans that you are now, would give the baby faced Clutch of Germantown, Maryland way back in 1991?
Jean-Paul Gaster: Pay your taxes on time and stay hydrated. Iâ€™m better at both these now.
NRR: This may seem like a simple question at first blush, but are you the same band when Clutch first started out, lineup changes not included, and why or why not?
Jean-Paul Gaster: We are the same four guys playing the same four instruments. When we started we only wanted to play good shows and make good recordings. We still subscribe to those same goals today.
NRR: Is there an unofficial official drink of choice for the band, and if so what might it be?
Jean-Paul Gaster: We love beer. We look for anything local and prefer our beer as fresh as possible. Our go to style is probably a hoppy ass IPA. Life is too short to drink crap beer. 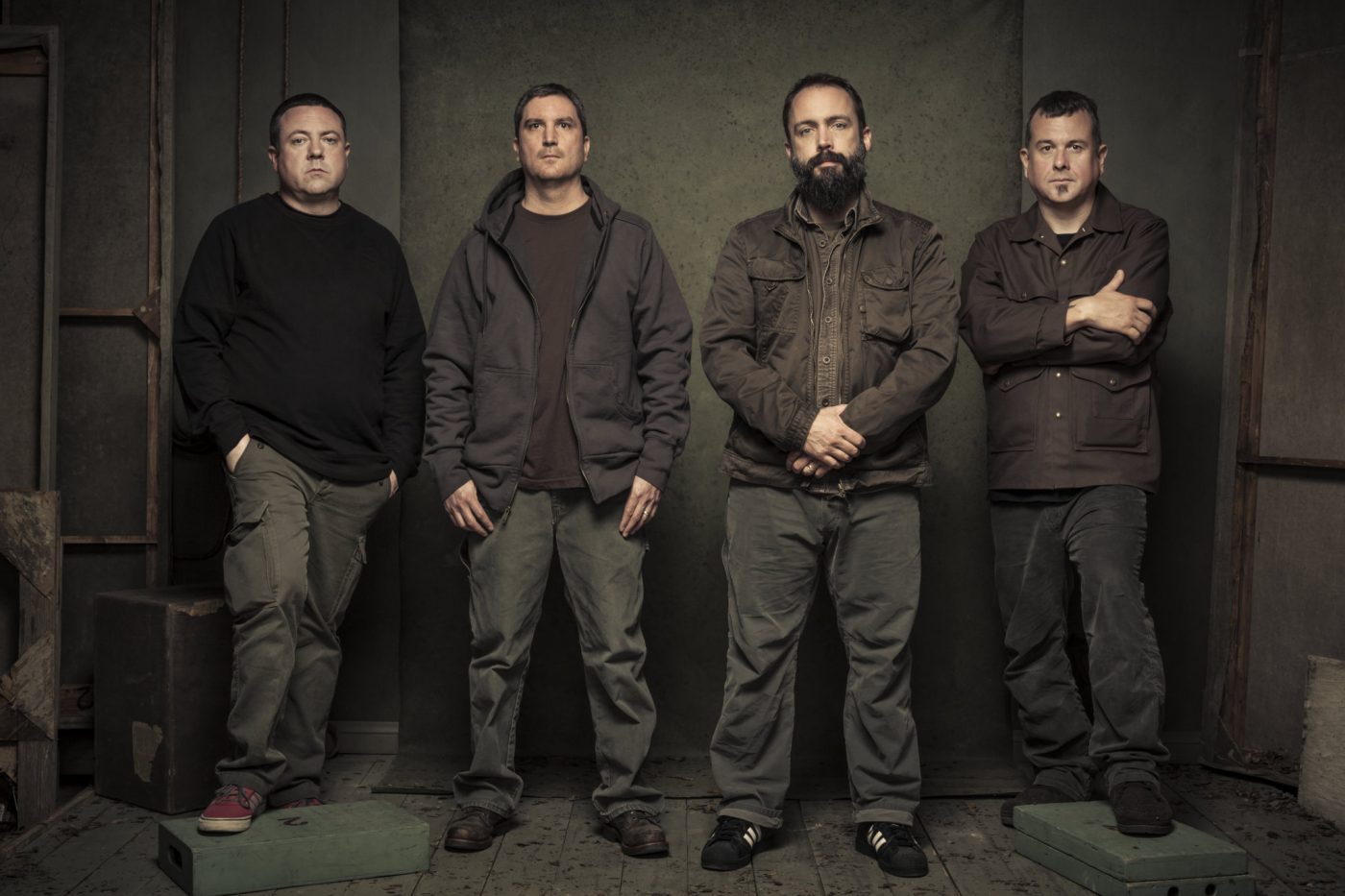