Tough times don’t last. Tough people do. From hard times, to the mean streets of Windsor and Detroit, Richy Nix isn’t quitting without a fight.

On Jul 24, 2015, one of FiXT Record‘s newest members to the family will be dropping a brand new offering to these mean streets of music stardom. Richy Nix‘s Fearless will be out to add a little more fuel to the fire of everyone that didn’t give him a second thought before. Dealing with some tough times, how his music can almost write itself, and Pop’s favorite whiskey are all discussed in the interview below. Now, enjoy the show.

NRR: My little gremlins at FiXT tell me that you have a release of an new LP, Fearless, which due out Jul 24, 2015. What makes this record drop so special for you? 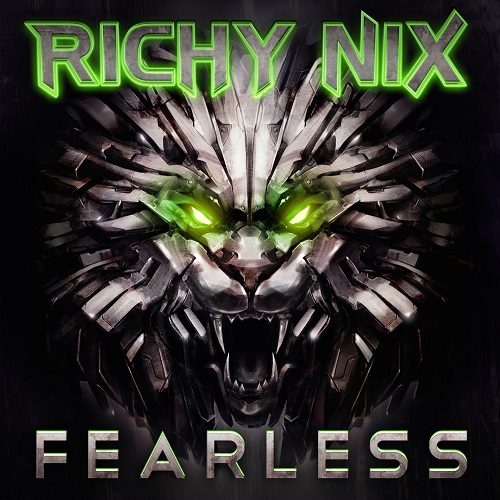 Richy Nix: My newest work is always my favorite work because I naturally progress on every record. I wrote this record 1000 percent how I wanted it. My Note To Self EP had some major label influence that I had to meet halfway with. This record is my dream come true, plus I got to work with my favorite producer, Joey Sturgis! When I heard his work with Of Mice & Men and Asking Alexandria I knew I just had to work with this guy!
NRR: Since I mentioned the label in the first question, how is it working with Klayton and the rest of the FiXT stable of artists so far?
Richy Nix: They treat me like family and are always there for me. Even on a personal level I can tell they genuinely care about my well-being. Itâ€™s a great feeling and I couldn’t have a better home.

“I’ve been through hell before, but this time was different. Everything in my life was going terribly wrong… just when I thought it couldn’t get worse it did! My only escape was to stay strong and put how I felt into music. Slowly, with time, things got better. Fearless is the story of how I went through hell and back and used my songwriting to survive.” ~ Richy Nix

NRR: For those that don’t have the Detroit/Windsor music scene down to a science, how would you describe your vibe to someone that hasn’t heard your music before this?
Richy Nix: I grew up listening to Nirvana and 2-Pac and as I got older I hung out with some rappers from Detroit and was heavy in the hardcore scene in Windsor. I loved both styles of music so much that I worked really hard to find a way to blend rap and rock together. To be more precise, my music has hip-hop in the versesâ€”telling the dark part of the storyâ€”then comes a uplifting alternative and pop choruses with metal breakdowns in the bridges and some synth parts gluing them all together.
NRR: You have a foot in each of two different worlds, musically. How you balance or mix the two without losing one entirely into the other and still make it a Richy Nix track?
Richy Nix: Honestly, just years of trial and error, paying attention to detail, and using my ears. Nowadays you can grab anyone’s iPod and find a variety of genres so I think itâ€™s a little more understood, now more than ever.
NRR: From a few different accounts, you didn’t have it easy growing up. How much of that finds a way into your songs as a release or as a warning that life isn’t always fair?
Richy Nix: It’s been my way of coping, my reason to not just snap and give up. It gave me a goal and a reason to get out of bed with focus and determination. It saved my life.
NRR: You’ve been around for a while, been on a few majors festivals, and toured with some amazing artists. What would the Richy of now say to the Richy just starting out in Windsor to save some set backs early in your career?
Richy Nix: I would have simply told the old Richy to keep his head up, never give up, and follow your heart. It’s all you really can do. The business is a jungle and nothing is what it seems.
NRR: National Rock Review debuted your single, “Erase You,” last month. Does it ever become normal to see yourself on-line in a video or hear yourself on over the air stations like 89X?
Richy Nix: I donâ€™t really take a moment to celebrate. I always want more, I never get too comfortable. Iâ€™m pretty hard on myself, which is a gift and a curse. It keeps me going and progressing but it also stresses me the fuck out! [laughing]
NRR: YouTube comment reading is a train wreck hobby of mine. Even with all of the unbelievably positive comments on the page for “Erase Me,” do posts like, “sounds like a skinny jeans version of Slipknot,” get more attention from you or have you gotten to the point as an artist where you just know you have to take the good with the bad?

Richy Nix: You know what? Iâ€™m human, and negative comments coming from people who donâ€™t even know me will hurt me sometimes. I wish they had the balls to say it to my face but the fact is they donâ€™t. So, in a sense, I win. Iâ€™m not commenting on their shit, I donâ€™t even know who they are. So with that in mind I keep it moving and yes I take the good with the bad.
NRR: How does a typical writing session go for you? Is it a systematic series of events or is it completely random ideas that piece themselves together or some other way entirely?
Richy Nix: It starts with a hip-hopish instrumental, then I add real drums and guitars then vocals. Song done! I have written songs in a complete random order but the format I just mentioned seems to work best for me.
NRR: Having been to the FiXT compound, I know certain people are into video gaming to one extent or another. Have they sucked you into that world yet, and if so what’s you’re game of choice right now?
Richy Nix: I’ve been a huge gamer since I was a â€˜lil kid. My first console was a “Sega Master” then graduated on to the “Sega Genesis” I am currently playing “The Witcher 3” on Xbox One and Iâ€™m loving it. Such an amazing game with such great detail. I can play a game and totally get lost in the world its an escape for me. I will forever be a child at heart when it comes to gaming.
NRR: I don’t know if there are plans in the works to tour in support of Fearless or not. Who do you think would make a killer tour to go out with for 50 or so dates if you could grab anyone you wanted?
Richy Nix: I do have plans to tour in the near future. I have to get into live mode and start rehearsing. I think, if I was a supporting act for Asking Alexandria, A Day To Remember, or even Linkin Park would be amazing. Anything could happen!
NRR: If a major adult beverage company sent you a letter saying they wanted to throw money and free product at you in a sponsorship, what would be your drink or brand of choice and why?
Richy Nix: At this point I have no personal preference, but if I had to choose it would be between Wiserâ€™s or Crown Royal. Whiskey is my shit! Wiser’s because it’s brewed in Windsor and Crown because of my Pops.