The New Jersey-based five-piece brings with them a formidable triple bill of international talent that includes a pair of the UK’s finest emerging rock bands. The first of which being Norwich based outfit Bad Touch, who rather amusingly requested a framed print of Norfolk’s own Alan Partridge on their dressing room wall. Of course, the O2 Academy Newcastle were only too happy to oblige. 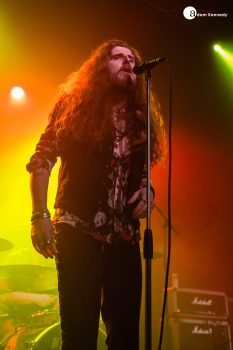 Bad Touch are no strangers to the Newcastle area having performed here four times in the last twelve months. The group has been gaining a lot of momentum in recent times thanks to their extensive touring schedule coupled with airplay on the likes of Planet Rock Radio.

Bad Touch showcase tracks from their latest album Truth Be Told including the likes of the groove-heavy “Heartbreaker Soulshaker”, the band’s incredible cowboy song “Outlaw” and the hard rocking “My Mother Told Me”.

Bad Touch are getting ready to release a new studio album and subsequently, they take the opportunity to include one of their freshest cuts “Lift Your Head Up” in their set tonight. To date the song has been performed live only twice prior and judging by the strength of this track alone, the group’s forthcoming release is set to be one to watch out for.

Bad Touch close out their short but sweet set with the anthemic “99%” which has much of the crowd singing along. It’s always a difficult task opening a show this early in the evening, but Bad Touch most certainly make their mark in the short time allotted to them. 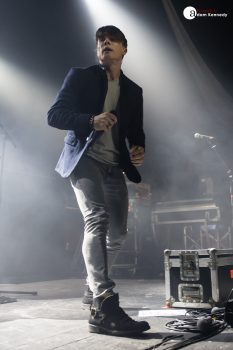 Joining Skid Row throughout all dates of their tour is main support Toseland who are led by the band’s charismatic former superbike world champion James Toseland. Having retired from racing in 2011 due to injury James has gone on to lead a successful music career.

Toseland delivers somewhat of a high octane set hitting the stage with a triple whammy of singles from the band’s first two albums including “Puppet On A Chain”, “Living In The Moment” and “Life Is Beautiful”.

Assuming a position behind his trusty keyboard the band’s versatile frontman slows down proceedings with the beautiful ballad “Fingers Burned” and the incredibly catchy “Renegade” before closing their 30 minute set with the frantic “Broken Hearts and Broken Bones”. Toseland charms the Geordie faithful leaving them more than warmed up for Skid Row on this cold winters night.

Tonight Skid Row makes an eagerly anticipated return to the North East of England for their first appearance in the region since 1995. Back then the group were touring in support of their seminal album Subhuman Race and performed in front of a packed out crowd at the legendary Mayfair Ballroom. 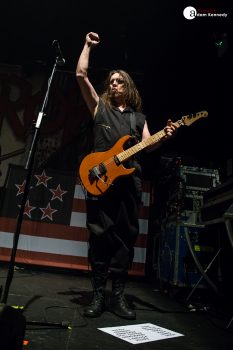 Although the band’s lineup has changed a little since those days, the core of the group still remains including guitarists Dave ‘Snake’ Sabo and Scotti Hill along with bass player Rachel Bolan. Ex-Dragonforce lead vocalist ZP Theart took over the helm last year with drummer Rob Hammersmith rounding out the lineup.

As the US-based rockers hit the stage they open the show with a hard-hitting rendition of “Slave To The Grind”, which is followed in quick succession by “Sweet Little Sister” and crowd pleaser “Piece of Me”. This three strong stretch immediately transports the audience back to the band’s golden era of the early 90’s and sets the tone for the night ahead.

Skid Row’s setlist this evening is packed full of wall to wall classics centring on their 1989 eponymous debut album and Slave To The Grind respectively. The group perfectly craft a set which showcases their early back catalogue with only one track in the set namely “We Are The Damned” coming from the band’s post-Sebastian Bach era. Every song which Skid Row’s loyal fans would want to here is aired during the group’s nostalgic set this evening.

Replacing a frontman is never an easy task for any band, but tonight ZP Theart perfectly represents the songs laid down by his predecessors all night long.

From ‘Snake’ Sabo’s guitar intro to “18 and Life,” the crowd hangs on every word of this timeless Skid Row anthem. Furthermore, Rachel Bolan takes over on lead vocals as the band put their own distinctive touch to “Psychotherapy” by The Ramones. Bolan declares how happy he is to be playing in the hometown of AC/DC’s Brian Johnson.

The band momentarily take down the pace during a passionate acoustic guitar infused rendition of “Quicksand Jesus” before an extended take of “Monkey Business” which features a mid-song jam between Bolan, Hill and Sabo closes out the main set and leaves the crowd wanting more.

Following a brief interlude, the band returns to the stage for a duly deserved three song encore which culminates in a fist-pumping rendition “Youth Gone Wild”.

With a career spanning 32 years, Skid Row are still going strong and showing no signs of slowing down.