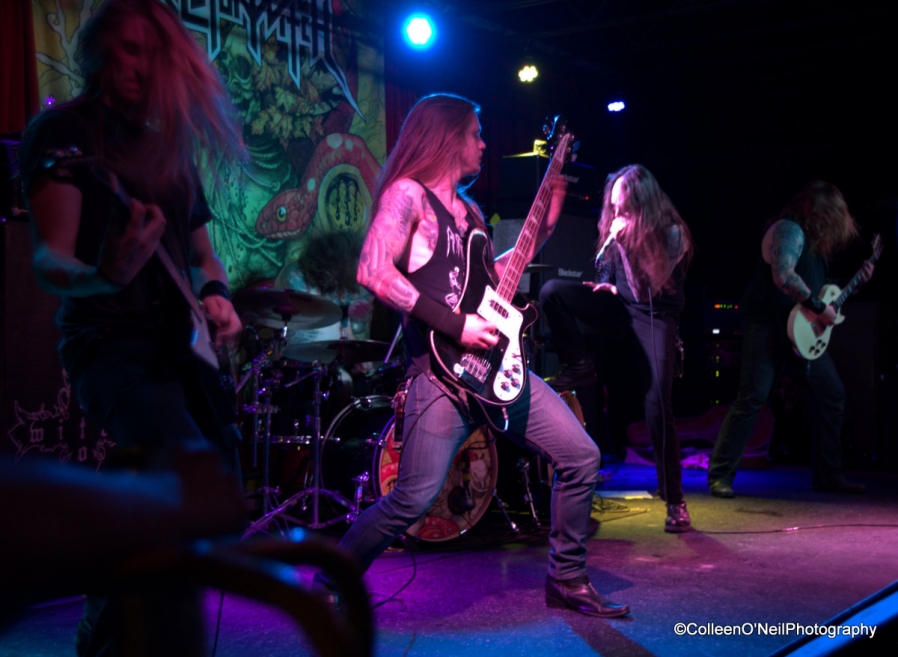 RagnarÃ¶k, the ‘Viking Apocalypse’ was scheduled to occur on Saturday, February 22 (according to Viking Festival director, Danielle Daglan), but either she was wrong or the gods are late. A lucky break for the patrons of The Firebird in St. Louis, Missouri… a smaller venue was available. They did not serve food, but had a nice (and well-priced) beer and liquor selection and apparently book great acts. Instead of the end of the world, patrons at Firebird were treated to a night of loud, hairy, bearded rock courtesy of Voyage of Slaves, ThorHammer, and Skeletonwitch.

Voyage of Slaves, a four piece death metal band with thrash and black metal influences from Paducah, Kentucky, opened the show with a power-packed set of originals. Formed in 2008, the band consists of guitarist/vocalist Dean Dokken, bassist Nathaniel Vowell, guitarist Dave Palenske, and drummer Jon Grace. They have two EPs, Victorious and Forged Beneath The Frost (which is available at voyageofslaves.bandcamp.com).

ThorHammer, another ‘young’ band (formed in 2010 in St. Louis) with a sound that is best described as melodic thrash metal, played next. Their set was loud, fast, and heavyâ€”in other words, a perfect complement for the bands that bookended their set. The band is a foursome of guitarist/vocalist Thrashmaster, bassist Thunderfingers, guitarist Ian Parks, and drummer Chris Naes. There are three songs available for download at reverbnation.com/thorhammer.

Rounding out the night, five-man band, Skeletonwitch took the stage as if the Norse god Heimdallr had blown the Gjallerhorn (a mystical horn that predicts the coming of the end of the world). They blew through song after song with barely a second between.

Skeletonwitch, one of the hardest working bands around, has been together since 2003 and continues to put out music using a method that combines old-fashioned work ethic with an unwavering attention to quality. In the past seven years, Skeletonwitch has put out a full-length album every other year, beginning with Beyond the Permafrost the year they signed with Prosthetic, followed by Breathing the Fire in 2009, Forever Abomination in 2011, and Serpents Unleashed in 2013.

Their sound is an amalgamation of blackened metal, with touches of doom, and equal parts of frost and fire. Their set was a dizzying scene of non-stop movement (especially flying hair and beards) punctuating songs lasting less than three minutes.