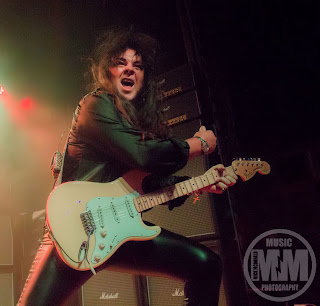 Yngwie who? Yngwie Fucking Malmsteen, that’s who. The legendary neo-classical guitarist brought his Spellbound tour to Detroit, MI where he did what he does best, captivate the audience with his incredible and divine guitar skills. Forging his skills since the age of 12 in his native Sweden, Yngwie has been influenced by such greats as NiccolÃ² Paganini and Ritchie Blackmore, which shine through in his complex and layered masterpieces of music that he performs.

Fingers flying up and down the fret at the speed of light, Yngwie conjures sounds and melodies from his guitar that would rival the sounds of an entire orchestra. Delivering songs that span his entire library of music, from the early Grammy nominated Rising Force released in 1984 to songs from his latest release Spellbound, the fabled maestro had the rapt attention of the entire hall (with several air guitarists filling in second chair) from the first moment the smoke poured on to the stage until the very end, which he finished off with fan favorites Black Star and I’ll See The Light Tonight.

Catch Yngwie on this tour if you can and be held Spellbound by one of the greatest guitarists of our time.