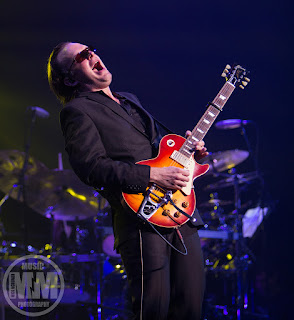 My journey to the Joe Bonamassa show started on Thursday night when he and his guitar tech Mike Hickey stopped by to check out the vintage guitar collection owned by a local west side guitar collector. Hanging out on the sidelines watching them both open case after case of vintage guitars owned and collected by this collector over the years was literally like watching kids in a candy store with free reign to help themselves to all that they desired. I’m no guitar guru by any means, but by the expressions on their faces as they examined and played each guitar over the course of the night, it was evident that they were all on cloud nine that night.

Forward to Friday night, I made my way down to the wonderful Fox Theatre, sold out that night for the show, people milling around the block hours ahead of time, Detroit jumping, with all the businesses in the immediate area of the Fox packed to the gills, the excitement glimmering in the warm spring air from the the exuberance of the crowds that had flocked downtown to witness the magic that was about to be performed on stage that night.

Shortly after 8pm, Joe B took to the stage for a short acoustic set, coupled with his drummer and keyboardist for a few songs in an intimate and moving block of songs, engaging the sold out crowd in a hypnotic trance, a heartfelt performance if there ever was one, the timbre of the notes ringing solidly throughout the theatre. That was shortly followed up with a crescendo buildup to an explosive launch in to the second act of his show, as the lights and smoke filled the stage casting flickering shadows tall and dark across the hall. Launching in to his electric set full of energy and vigor, Joe Bonamassa and his band took Detroit on a tour de force of sight and sound, blues notes wailing in a mournful, soul reaching sound that echoed long in to the night, touching the hearts of everyone in attendance. As a special treat to Detroit, he brought local blues legend Jim McCarty on stage for a couple songs, bringing the crowd to it’s feet in recognition of it’s roots in blues and music legacy. It was by far one of the most blissful concerts I have witnessed to date, and you would do yourself a huge favor to experience the wonder that Joe brings to the stage.