Legendary Maryland Deathfest celebrates 14 years of bringing the world’s best metal bands to Baltimore for a hungry host of metalheads.

The Maryland Deathfest in Baltimore is the premier metal festival in the Eastern US for the best extreme metal music. Besides Illinois’ Full Terror Assault or Detroit’s Berserker, you need to journey to Europe to experience a festival that embraces the metal community and provides the same level of entertainment.

Maryland Deathfest XIV took place Thursday, May 26 through Sunday, May 29. The event explores a variety of extreme metal music at multiple venues in Baltimore including Baltimore SoundStage, and the Edison lot. Given limited time, National Rock Review focused on the Edison lot stages located in the heart of Baltimore near the Mount Vernon district.

Both new and experienced travelers will find the Maryland Deathfest Survival Guide by Metal Chris from DCHeavyMetal.com to be indispensable. This guide provides detailed venue information, spreadsheets of set times and locations for each band, and helpful tips to compliment your festival experience.

The Maryland Deathfest is a well-run event with a hardworking and dedicated staff who put together an incredible experience for the concertgoer. Special kudos are due to event security, as they were outstanding. Friendly and helpful, the security teams are music fans and that adds to the sense of shared community at this festival.

With the sun beating down upon the Edison lots and raising the temperatures over 90, leather and denim-clad metal warriors descend upon the festival to enjoy music from Horrendous. They add a progressive spin to their death metal offering with quick time and chord changes. Sweden’s Centinex make old school death metal come alive with their fresh take on this timeless genre. 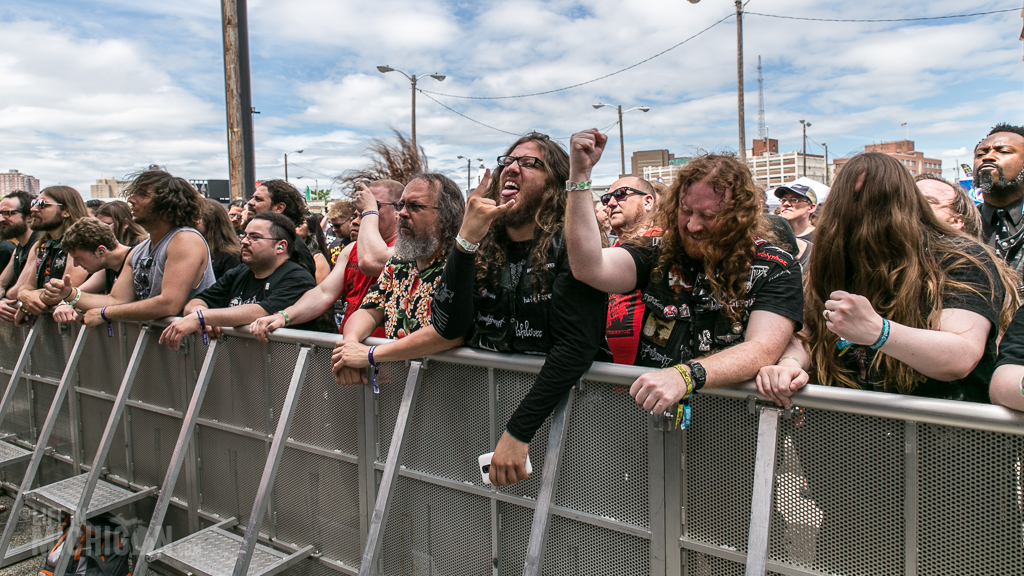 Sweden’s Khold cast dark shadows over the sunny skies with their hook-laden black metal. Gruesome received the nod to take the stage and cover for Sinister, who canceled their appearance. Gruesome offers a wonderful tribute to the legendary band, Death, with covers and originals.

The Haunted unfurls a barrage of melodic death when they assume the stage. Their catchy riffs and guitar solos compounded with aggressive vocals invoke a lively mosh pit. The band touch upon many crowd favorites including a few choice cuts from Exit Wounds and the fist pumping Hate Song.

Paradise Lost worked their magic casting dark and ominous spells with their haunting music. Samael enthralled their steadfast fans with black metal that uses electronic tones to accentuate the atmosphere. Finally, the fathers of Norwegian Black metal, Mayhem, held the crowd in black suspense with a set that pulls heavily from De Mysteriis Dom Sathanas. The shroud of fog intensified the band’s menacing performance.

Saturday dawned with metal baking under a brilliant blue sky. Australia’s Hellbringer added new life to old school thrash with hints of death. Their sound brought back memories of Possessed. Demonical embraces the thick and punishing guitar tones of their Swedish forefathers Entombed and Unleashed.

Gruesome’s second performance at the Maryland Deathfest is equally impressive. They swapped out a cover and an original tune to keep things fresh. The Swedish death onslaught continued with Deranged taking the stage. They filled the air with blast beats and fast guitar riffs spiked with squealing pick harmonics. Tulus is made up of three of the four members of Khold, which explains the similarity in tone and songwriting. Tulus perform’s many of their songs in Norwegian.

The most impressive performance of Maryland Deathfest XIV goes to Hirax. This California band is the definition of thrash metal with lightning riffs and plenty of power. They engaged the crowd from the start and had more energy than many newer bands. The mosh pit churned in a circle pit with bodies flying over the barricade. Atrophy worked hard to keep the west coast thrash going with a sizeable crowd of fans to reveling in the sun.

Captivating the crowd with historically accurate tales of war, Hail Of Bullets delivers a blistering assault of death metal. The guitar tones were dense with distortion. The withering heat did little to prevent a fervent mosh pit from erupting as Impaled Nazarene began to play. Their set of Finnish death metal-brimmed with screaming vocals and tireless drums. 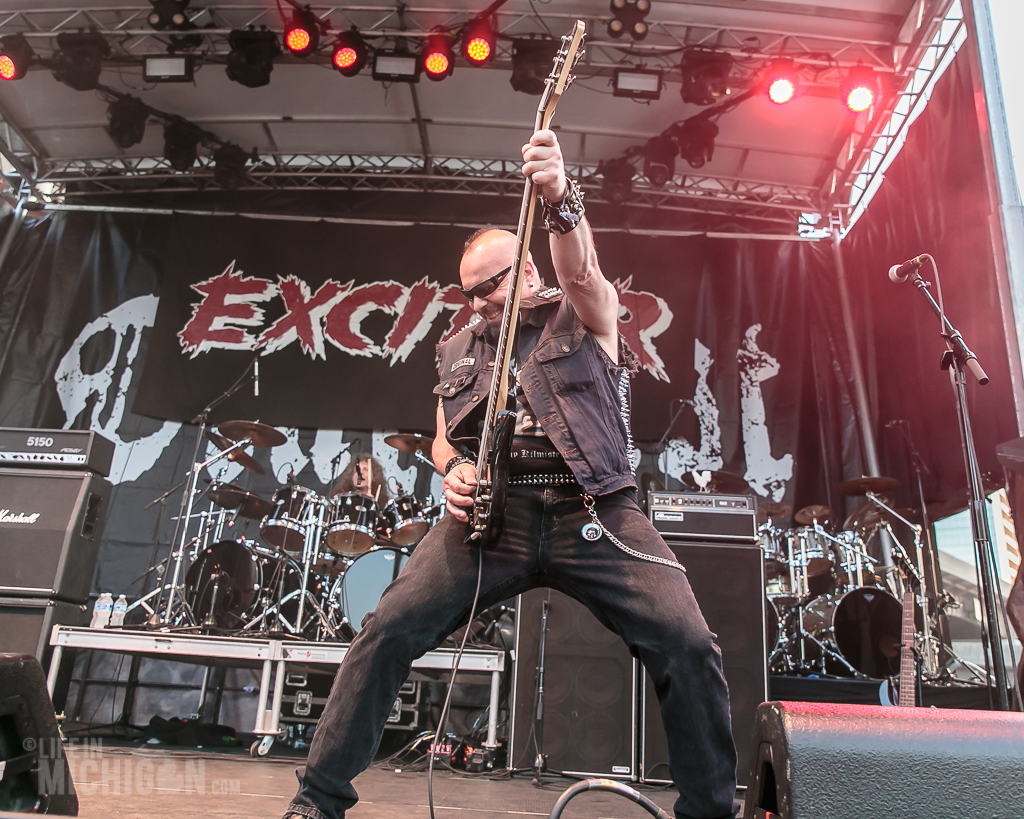 The original members of Exciter were teaching a class in the art of speed metal. Exciter is pioneers of speed metal and leaves no doubt that they possess the cops to stand among the best. The crowd shoved fists into the air as Exciter ripped into their set.

Things quickly got intense as Nuclear Assault kicked into their set with the song â€œSinâ€. Nuclear Assault‘s tenacious riffs are amplified with by the earth-shaking rhythms of Dan Liker and Nick Barker (original drummer for Cradle of Filth) who lay down the law with each beat.

Saturday’s show comes to a climatic finale with Testament. The band encourages the crowd with arms uplifted and engaging eye contact. They play a great mix of tunes from their many thrash classics as well some choice cuts off of the Dark Roots of Thrash album.

Making their mark on the Maryland Deathfest even more memorable, Chuck Billy calls for a wall of death within the pit. It is a sight to behold as dozens of moshers roiled together in a chaotic celebration of metal.

Sunday marks the end of Maryland Deathfest XIV. Australia’s Denouncement Pyre conjures the fury of the Dark Lord with razor sharp black death. Shed The Skin brings down the hammer with death metal that is reminiscent of Incantation with a hint of early Slayer.

Nocturnal Graves from Australia set the stage on fire with Satanic thrash punctuated by guitars running at full tilt to a chorus of blasts beats. The audience held the horns held high in appreciation. Wombbath made their first appearance in the US to spread their message of death. Visa issues prevented their drummer and a guitarist from making the voyage. Fortunately, Jeramie Kling and Taylor Nordberg from Absence were available and filled in. You would never guess from their outstanding performance that this band had not been playing together for years.

Desaster released the hounds of hell in a deluge of breakneck guitars, bone jarring rhythms, and roaring vocals. Covered in leather and spikes, these Germans give the crowd at the Maryland Deathfest a run for their money. Bongzilla brings distortion-laden stoner grooves to the delight of the fans who pressed close to the stage. Everyone in the crowd was ready to bake down on some fat grooves and dank riffs.

Every enthusiast of extreme metal music should make the pilgrimage to Baltimore to witness the spectacle of the Maryland Deathfest. This festival does a phenomenal job of delivering great music with a welcoming atmosphere that celebrates all the good things about the metal community.