Neither torrential downpour nor flash flood warnings would stop this crowd of metalheads from gathering at Stage 48 for Primal Fear as power metal sweeps Manhattan!

Torrential downpour and flash flood warnings were no match for the crowd of eager fans which gathered at Stage 48. Just two days after the amazing Pagan Fest America tour that rocked Irving Plaza, it was time for more heavy metal music! However, instead of warriors and vikings, fans were treated to some old school power metal by the German heavy metal greats, Primal Fear along with NYC local acts Gothic Knights and Flames Of Fury.

First up was power metal band Gothic Knights. The five-piece band set the tone for the evening delivering a high energy polished performance with plenty of guitar solos, fast drumming and everything else that makes traditional heavy metal addictive.

The last time I had the pleasure of seeing them live was in January when they opened up for Michael Schenker. Since that show, the guys have been hard at work promoting their album Reflections From The Other Side, as well as writing new material for a future release.

They’ve been around for over twenty-four years, as was clearly evident from musical experience and expertise they displayed while performing. Their set list consisted of music from their previous releases and one new song Valley Of The Kings from the yet to be released material. They closed their set with Down In Flames. The crowd reaction was very positive and all band members appeared happy while playing.

I could not imagine a better local opener than Gothic Knights. This is a band that prides itself for putting lots of time and effort into their music. But above all, these guys have passion for what they do. I hope they raise their ambitions to take their music on a full tour to places beyond the NYC area.

Next up was Flames Of Fury which have the perfect blend of power and heavy metal backed by an energetic and confident female vocalist. The band formed in 2009 and in just five years have made their mark in the NYC music scene. According to their bio the goal is to “create the most intense and exciting metal songs possible.”

They did not disappoint. Vocalist Angelica Vargas dominated the stage and delivered an intense performance reaching those high notes effortlessly. Guitarist John Perez is a true showman. His guitar work is technical, melodic and full of raw emotion. His guitar solos are well executed. They engaged the crowd perfectly and finished their set to a loud effervescent applause. The band is currently at work on a full length album The Ecstasy of Vengeance and have a show scheduled on June 7th at the Blackthorn in Queens NY.

Finally it was time for Primal Fear! Back when Rob Halford left Judas Priest, the Priest were on the lookout for a new front man. Ralf Scheepers unexpectedly quit Gamma Ray and auditioned for the spot but, it was Tim Ripper Owens who filled in as the new vocalist. So in 1997, Scheepers formed Primal Fear after Ownes got the gig with Priest.

The band just wrapped up their North American tour and are headed to Japan before embarking on various summer festivals in Germany.

The band kicked of their set with Final Embrace from their second album the Jaws Of Death (1999). The packed venue went crazy from the minute Primal Fear took to the stage. Lot’s of head banging, raised fists, and singing ensued, as the band kicked off their powerful performance. One of my favorite things about Primal Fear is their ability to release excellent albums which was the case again this year with Delivering The Black. As the band performed Alive & On Fire, Delivering The Black, One Night In December and When Death Comes Knocking, it was evident that the fans loved the new material as they energetically sung the words in unison.

The band also has some beautiful and well written ballads. For example, the fan favorite Seven Seals and the epic Fighting The Darkness. Ralf Scheepers was absolutely brilliant and on point. His vocals were breathtaking; complete with power and raw emotion. His delivery is reminiscent to that of Bruce Dickinson or Rob Halford. His unique voice captivated everyone at the show. His band mates performed their parts perfectly, however it’s when the band plays their brand of raw, fast and heavy power metal that things get even hotter! The reaction of the fans to songs like Nuclear Fire, Chainbreaker, Angel In Black, Bad Guys Wear Black, and the heavy metal anthem Metal Is Forever ( my personal favorite) were responsible for the crowd going berserk with lots of head banging and moshing.

While taking photos from the balcony area, I could see fans singing along to the words while together swaying to the music. There were lots of fans turning to the person next to them singing the chorus with fists held high. Primal Fear united their fans even if it was only for a brief time. And, for two hours, fans were able to forget about the horrid weather and the ensuing workday ahead.

All in all, Primal Fear delivered a crushing set from start to finish.

And be sure to buy their new album Delivering The Black available at Amazon. 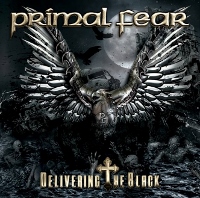