Phil Lewis & Tracii Guns are back together and firing on all cylinders as L.A. Guns deliver a highly energetic performance to a sold-out crowd at The Machine Shop in Flint, Michigan.

L.A. Guns gave Flint, Michigan what many metalheads have been waiting 15+ years for; Phil Lewis & Tracii Guns together again on the same stage singing all their hits from the band’s 80s hair metal days.

Having sold over 6 ½ million records, Lewis & Guns are the sole members from the “classic lineup” while rounding out the rest of the band is Michael Grant (guitar), Johnny Martin (bass) and Shane Fitzgibbon (drums).

L.A. Guns were a nuclear bomb of energy erupting the moment they took the stage. They opened their set with “The Devil Made Me Do It,” a new one from their recently released The Missing Peace album and without hesitation, segued right into “Electric Gypsy” and “No Mercy,” both from their 1988 self-titled debut.

They kept the fevered pace going with “Over the Edge,” from their 1991 Hollywood Vampires album followed by “Bitch Is Back” before Lewis would take a moment to speak to the crowd. “So, you’re into the 80s metal shit, right?” he asked as the crowd cheered along. “Well, you’ve come to the right place. We’re a long way from Hollywood so thank you for making us feel at home. The only thing we need right now is a little sex action” as the band jumped right into their classic hit “Sex Action,” which also drifted into the Rolling Stones “Paint It Black” for a quick spell.

The band played two more from the new album, “The Flood’s the Fault of the Rain” and “Speed,” followed by “One More Reason.” These new songs do not feel new at all. They sound like classic L.A. Guns and fit exceptionally well into the band’s set list of classic hits.

They played “Don’t Look at Me That Way,” taken from the band’s 2002 album, Waking The Dead, before Lewis and Guns would take a quick break and turn the mic over to Grant who would not only play guitar but also sing vocals on the Prince hit “Purple Rain.” Lewis and Guns would return for “Malaria,” taken from their 1989 album, Cocked & Loaded, before the whole band would take a short break. 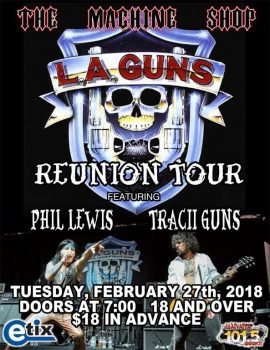 Guns walked back out on stage and started playing a little Eddie Van Halen guitar solo while the rest of the band members returned to their places. The EVH solo quickly turned into the intro to AC/DC’s “Hells Bells” before seguing into the band’s 1989 hit “Never Enough.”

The crowd was ecstatic during “Never Enough” singing every word so loud that you could barely hear Lewis’ vocals over them. As the song ended, Lewis mentioned to the crowd “That’s the shit right there. Fuck Harpos (referring to the Detroit club the band had played at many times during their heyday), this is where it’s at!”

Guns showed his musical prowess on the instrumental “Jelly Jam” demonstrating why he is one of the most underrated guitarists of his generation. Not just your typical hair metal style solo, this instrumental showcased a more psychedelic, bluesy, soulful style not often associated with this genre of music. Watching Guns play his guitar is like watching Jimmy Page or Eddie Van Halen. He has the intensity of Page while always smiling and appearing happily engaged to his instrument just as EVH always is.

Lewis needed no help as the enthusiastic crowd belted out the words to “The Ballad of Jayne,” the band’s biggest hit which peaked at #25 on Billboards US Mainstream Rock Chart and #33 on Billboards US Hot 100 Chart.

Lewis mentioned “Tonight we’re all together in the church of rock ‘n roll and I’m happy to be preaching to you” before ending on a high note with “Rip and Tear,” their second charting single from Cocked & Loaded.

Seeing a band of this calibre in such a small club made you feel like you were lucky enough to be one of the few attending a secret show which had just ‘popped up’ somewhere along the Sunset Strip. The fans were definitely excited to see L.A. Guns back where they belong; in a small, dingy, sweaty, rock ‘n roll club where anything goes.

Our photographer, Thom Seling, was on hand to capture the night. Here are his images from the evening.