Local heavyweights, Ballz Deluxe have been putting together their annual Jingle Ballz celebration for seven years now. What some call the little brother to The Night 89x Stole Christmas, this annual celebration has been gaining lots of momentum over the past few years.

Joining them for this yearâ€™s installment was Dead in 5, False City, Spiral Crush and their friend Phil â€œMr. Dementedâ€ Hawley, spinning some crazy stuff in-between. Also on hand were Howie D. and Rachel May of Hard Edge Radio as the host and hostess for this holiday tradition.

Hailing from the outskirts of Detroit Rock City, Ballz Deluxe is purely ballz out, original rock nâ€™ roll that puts you in the mood to party. With honest, melodic hooks, catchy choruses, and heavy grooves, not to mention a reputation for putting on a no holds barred, energetic live show, Ballz Deluxe is flying the flag for dirty, dynamic, in-your-face, heavy rock.

Collectively, the band is a melting pot of many different musical tastes and backgrounds, ranging from the likes of extreme metal to old school and modern rock, and even pop music. It makes for the interesting dynamic that is evident in the originality of their music.

Fronted by Rick Drinkard, with his deep, throaty, attitude-laden vocals and commanding stage presence, along with Scott Christyâ€™s crunching rhythms, progressive and sometimes, outlandish, lead guitar work from Chuck Moberg, Greg Zubalâ€™s driving, bottom end bass lines, and some powerful, intelligent drum chops from Justin Richter, Ballz Deluxe is all about delivering the goods in the studio and on the stage. There are no egos. To Ballz Deluxe, itâ€™s all about good times and the love of playing good music together. They do so all while putting on a fun, energetic live performance for the fans. Theyâ€™re the guys youâ€™ll find at the back of the bar, posing for pictures, signing autographs, and interacting with the fans, rather than hiding out on a tour bus after the show is over.

Since 2007, Ballz Deluxe has been embraced by metro-Detroit and beyond. They released a widely accepted debut album in mid-2008, and a follow-up, Volume II, in 2010. With receiving continued radio airplay and support from Detroitâ€™s 101.1 WRIF and Flintâ€™s 101.5 WWBN, and sharing the stage with other high-profile local and national acts, the Ballz crew are certainly ready to spread their dose of Pure Detroit Rock Nâ€™ Roll to the masses. The band is putting the finishing touches on their next album and plan on being right back in their fanâ€™s faces as soon as itâ€™s completed. 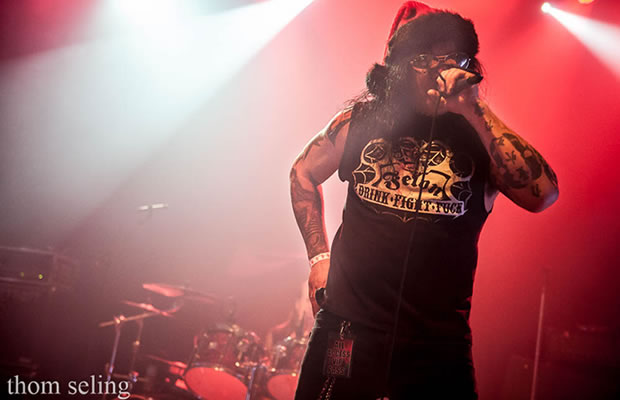 Thereâ€™s no corporate sheen marring the honest, and downright dirty rock nâ€™ roll played by Dead in 5. The band grinds out intense musical gems with as much super-charged muscle as a new Mustang rolling off the assembly line. Turn the key, and floor it! Dead in 5â€™s music is not just an assertion, itâ€™s an absolute declaration of the power of rock nâ€™ roll.

Evoking a sonic mash-up of Clutch, Soundgarden, Ministry, and Led Zeppelin, Dead in 5 play dirty outlaw rock that will make you raise your fists in salute to their musical juggernaut. Its Sons of Anarchy meets Fight Club set in the post-apocalyptic Mad Max environment of Detroit Rock City. Since their debut show inside one of Detroitâ€™s most notorious biker clubhouses in January 2013, Dead in 5 has become an in-demand live act headlining metro-Detroitâ€™s top venues, in addition to support slots for many national acts.

In July 2013, the band took first place in reality TV show American Talent Hunters Detroit search. In August, Dead in 5 were invited to perform at the exclusive House of Harley Party, as part of Harley Davidsonâ€™s 110th Anniversary Party in Milwaukee, Wisconsin.

At the close of 2013, Dead in 5 were honored in Music Connection magazineâ€™s â€œHot 100 Unsigned Live Bandsâ€ issue. Creating music amid a bankrupt and corrupt city, the band knows they have nothing to lose. Itâ€™s â€˜All or Nothingâ€™ and tequila soaked, outlaw rock band Dead in 5 is playing for keeps. 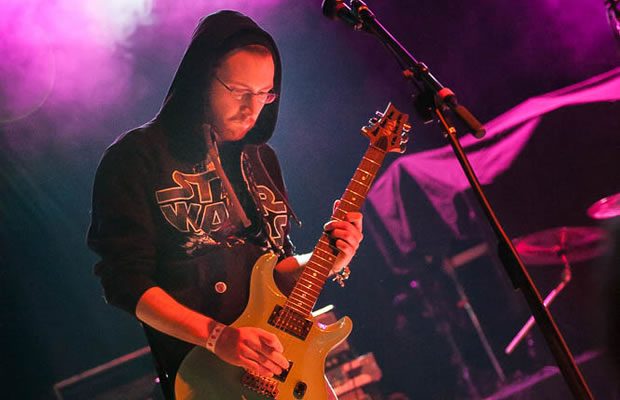 False City formed in the fall of 2006. The band was auditioning singers and found their singer through MySpace. They explored the music that each party already had and quickly started writing new material as a band. Four members coming from four different bands with varying influences make for an eclectic sound.

Consisting of Chad Ozias (vocals, guitar), James Rose (bass), Jon Vidal (drums), and Kenn Flowers (guitar), False City went into the studio in the summer of 2007 and recorded their debut CD, Vacancy. The band has formed a nice following of dedicated and passionate fans in Detroit and has started to branch out regionally since 2009. They released their most recent CD, Against All Odds in June of 2013 in front of a sold out crowd at the Magic Bag in Ferndale, Michigan. 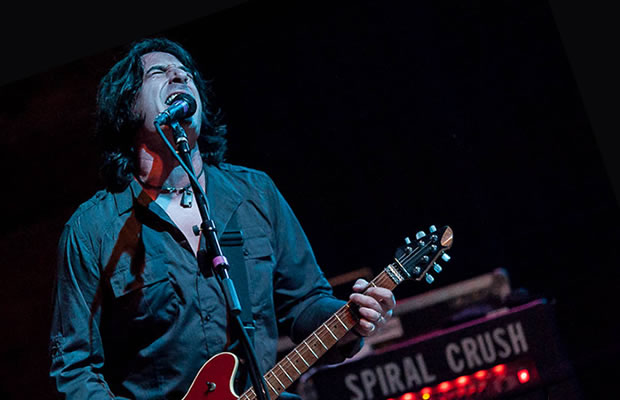 With catchy, hard-hitting riffs, heavy bass and relentless percussion, Spiral Crush is one of Michiganâ€™s emerging rock bands that cannot be ignored. Consistently delivering high-energy, unforgettable live performances, this band reminds us what loving and experiencing rock nâ€™ roll is all about. Their sound is diverse and contains undertones of classic and alternative rock.

Consisting of brothers Shaun Smail (vocals, guitar) and Scott Smail (drums) along with longtime friend Jimmy Conrad (bass), this trio grew up together always knowing that music would be part of their past, present and future. They say that their shared passion for music, from writing to performing, is one of the many reasons why they work and play so well together.

The band independently released their self-titled debut album in 2001 before Scott and Shaun joined another band, Throttlebody, which featured Andy Patalan and Kyle Neely of Detroit rock legends, Sponge.

In 2007, the guys came back together with Jimmy and released their second album, Nothing To Lose. The album showcased their in-your-face rock nâ€™ roll and was well-received by Detroit rock stations, 89x and WRIF 101.1.

Spiral Crush continues to build a solid reputation as an aggressive, American Rock band sharing the stages with many national acts as well as selling out clubs on their own. They recently completed their third album, Electric Life, and continue to setÂ precedence throughout the Midwest as a talented, genuine rock band that is to be reckoned with. The band is currently putting together a release party for Electric Life, which they plan on having in the near future. 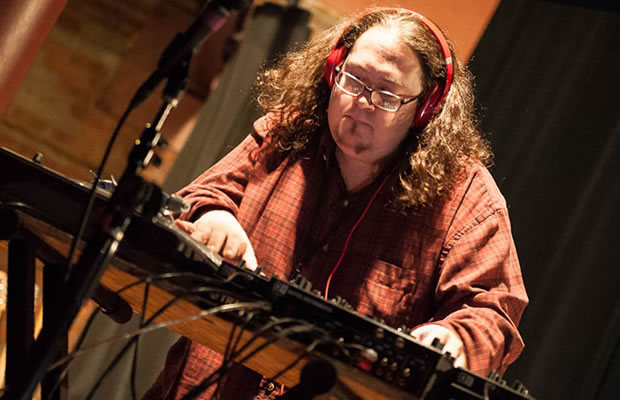 Mr. Demented is an emcee, turntablist, beat monger, and a multi-instrumentalist known to use everything at his fingertips to pull off a unique style of hip-hop that is true to its roots as it is groundbreaking.

Growing up in Raleigh, North Carolina, Phillip â€œMr. Dementedâ€ Hawley was mostly a fan of heavier music and spent most of his youth learning Metallica riffs on guitar. In school he was heavily into band during which time he mastered trombone and other brass instruments and later drums both in jazz band and marching. Never content with learning any one instrument he has been in bluegrass, death metal, hardcore, jazz, and even super sickly artboy indie bands.

Mr. Demented was given a copy of acid pro and began experimenting with multitrack recording and beat making. As a joke he decided to write and record some rhymes, which a friend told him turned out really good. After ten years of battles, shows, and many recordings later, Mr. Demented is a thought-provoking and complex emcee and competent freestyler.

In the spirit of having to learn each and every instrument that was available to him, Mr. Demented locked himself in a room with a turntable, a mixer, a battle record, and a copy of DJ Qbertâ€™s DIY volume 1. Today he is one of the most available scratchers around and has scratched on so many albums and mixtapes it would be too many to try to mention. Mr. Dementedâ€™s attention to technical detail earned him the rank of field specialist with Native Instruments. He has done and continues to do demonstration work for several music manufacturers.

Over the years, Mr. Demented has taken to finger drumming. He says he currently does things on his Native Instruments Maschine that drummers dream of being able to do and has become an innovator and teacher of finger drumming technique, which shows in his live act. Mr. demented has a little something for everyone musically and a live show that you will not soon forget.

The 7th Annual Jingle Ballz was a showcase of some of Detroitâ€™s best hidden talents. With Howie D. and Rachel May hosting and representing their mark in the Detroit rock and metal scene, the graciousÂ Crofoot staff for being inviting and always accommodating, the stage crew for putting together a flawless set up, and the beautiful Ballz Girl for making everyone on stage, including Santa, look better than ever, this was one successful event in every aspect of its production. I can see why it has been such a successful holiday tradition in the Detroit music scene and why everyone keeps looking forward to the next yearâ€™s installment.

Our photographer Thom Seling was on hand to catch all of the bands in action. Here are his images from that night.