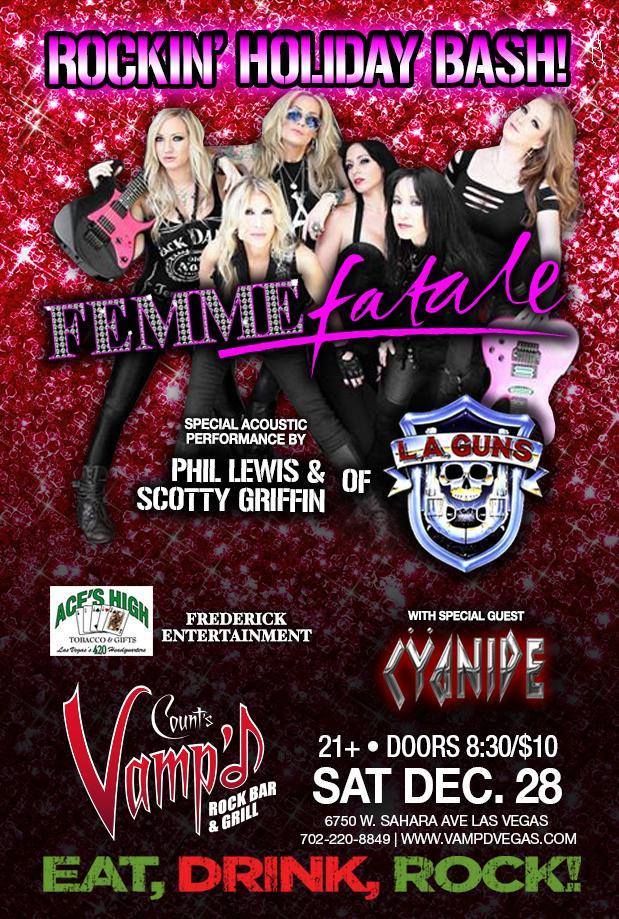 Chicks can most definitely rock and nowhere was this more evident than the Femme Fatale show 12/28/13 at Counts Vampâ€™d in Las Vegas, NV.Â  As crazy as this sounds I donâ€™tÂ  believe Iâ€™d seen an all female rock band up until this point.Â  I guess thatâ€™s because this was Femmes first ever Las Vegas show.

As the curtain pulls back, Lorraine, Courtney, Nita, Katt, Athena, and Janis command the stage with a well-defined mix of shredding guitars, kick- you- in- the- gut bass drum,Â  perfectly executed vocals, and pure, unadulterated, fun.

FF brought a genuinely positive vibe to the entire club.Â  With all the inner band turmoil that seems to prevail in this industry, itâ€™s refreshing to see musicians that enjoy playing together.Â  Femme Fatale brought a return to the feel good, party era of the 80â€™s, but without sounding dated.Â  This show was everything that rock was meant to be before the flannel clad, grey skies of Seattle rained down upon it.

The crowd assembled at Vampâ€™dÂ  were immediately brought to their feet by the unbridled energy of the women on stage.

Lead singer, Lorraine Lewis, was stunning both vocally and physically.Â  Pitch perfect notes mingled with confidence and sass proved undoubtedly that the stage is where Lorraine is most at home.Â  Her excitement was contagious and her smile infectious.

As dual guitarists, Nita Strauss and Courtney Cox, climb atop the front monitors like rock goddess book ends, itâ€™s impossible to keep your eyes off of them.Â  Obviously Nita didnâ€™t earn her nickname â€œHurricaneâ€ for being tame and counterpart Courtney is a force of nature in her own right.

Enter Athena on drums.Â  A tiny little thing in red and white knee socks, electric blue booty shorts, and a mane of killer blonde locks, Athena comes from a family of drummers, as the younger sister of Motley Crue drummer Tommy Lee and Ex Wife of Scorpions drummer James Kottak. No shadows to come out from underneath here. I’d put her up against either of them as she most certainly holds her own and looks amazing doing it.

Add to the mix gorgeous keyboardist Katt Scarlett on my right and bassist Janis Tanaka holding down the pocket, the visual was just as inspiring as the sound.

Femme played a set of 99% originals, which of course included their big hits from the 80â€™s â€œWaiting for the Big Oneâ€ and â€œIn and Out of Loveâ€.Â  Killer tunes that had everyone singing along and nostalgia fully embraced.Â  The only cover of the night, a spirited rendition of Kissâ€™ â€œLick it Upâ€ included two fully costumed Kiss impersonators from the audience and a guest drummer as well. The set finished just as fierce as the opening notes.

A feel good night of rock and roll was had by all.Â  Donâ€™t be fooled by their sex appeal.Â  These women kick ass.Â  If Femme Fatale graces your city with their presence in 2014 donâ€™t dare miss it!