ACIDIC has been a passion for lead singer/guitarist Michael Gossard since forming the band in high school in 2008. Rounded out by drummer Matt Whitaker, lead guitarist Josh Bennett and bassist Max Myrick, this hard-working indie rock band has become one of the hottest young bands to emerge out of the Southern California scene in quite some time. 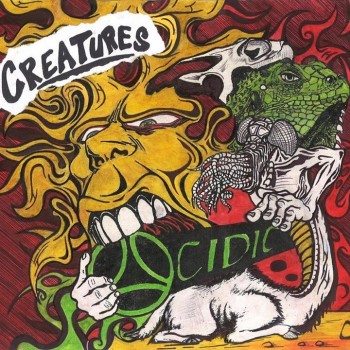 Creatures is the bandâ€™s third collaboration with multi-platinum award-winning producer John Ryan of Chicago Kid Productions. The band hit the concrete and has spent the past summer touring all over the US in support of Creatures.

The album opens up with their infectious radio hit â€œChicago.â€ This song has a nice pop rock sound to it, similar to that of Hinder during Hinderâ€™s â€œExtreme Behaviorâ€ days. It has a great guitar hook however the mix is a little bass-shy, and sounds a bit hollow. The lift present in the chorus helps the song soar and the vocals rise in intensity at just the right level.

â€œBeatnessâ€ is an upbeat rocker with a great intro harmony and a wonderful sounding synth bass. Similar to â€œChicago,â€ this tune has a repetitive guitar melody that hooks the listener. The layered vocals during the chorus was a nice added touch. The drummer really shines with the cymbal-ride during the chorus, and the bridge was perfect.

â€œCreaturesâ€ has wonderful harmonies throughout. The singer really shows his prowess with multiple layers and knows just when to forego traditional fifth-step harmonies in favor of octaving. This is a good jumpy sort of song that has a really peppy locomotion to it. One canâ€™t help but fall in love with the half tempo chorus about two minutes in, and as soon as the guitar solo kicked in and the chord progression changed, the listener becomes captivated entirely. What a great unique sound these guys have!

â€œRoll Xâ€ is a groovy tune with some nice whispery vocals in the verses. This song really carries however the drums sound kind of thin and hollow. The end product sounds like the drums should be driving and thick. Still, this is a really fun song to listen to.

â€œArtists Under Siegeâ€ has a Queen-ish rhythm to start. When the song kicks into the first verse, it does this whole mood transformation and drops into a lower key lifting the listener high above giving them a feeling of floating around in the clouds while listening to these captivating melodies. These guys are really onto something!

â€œRadâ€ is a nice rocker however a bit predictable sounding. Some of the musical magic the band has been showing us was sadly missing from this song. While not a bad tune by any stretch, in comparison with the rest of the record to this point, it comes off as kind of basic, and thus a little disappointing. The songwriting prowess ACIDIC has been showing us up to this point has one expecting something much more than a pretty formulaic up-tempo pop rock song.

â€œTemperâ€ opens with Gothic type harmonies before the drums come in, and then the song gets fairly straightforward, but with a few nice guitar licks here and there, punctuating the pauses between verses. Then thereâ€™s a return to the gothic sound right before the chorus. The real treat is the bridge harmony right before the solo, which was ‘sweat as honey’ to hear. Although somewhat straightforward, the song is peppered with enough unique flavors to make it interesting.

â€œPop 2â€ has a great sweepy keyboard wobble behind the verse, and the half tempo choruses were a nice touch. The bridge of this song really makes it shine, with a somewhat unexpected chord progression. The length of this song is a little on the short side, but this tune is a good, powerful and emotional.

â€œBeautifulâ€ is a ballad with such delightful vocal harmonies that it rises above your typical ballad. It has the feel of a soundtrack song to a nineties coming-of-age movie, in a good way.

â€œMy Townâ€ has an old-school rock vibe to it. Its double-snare rhythm gives it a fun and peppy feeling similar to that of 80s pop rockers The Romantics. One canâ€™t help but bounce along to the infectious groove of it.

â€œMiles From Homeâ€ starts out with a wonderful sounding acoustic guitar. The sound engineer did an excellent job with them. This is a wonderful song, however when the drums come in, they feel about three to five decibels too quiet. One canâ€™t help but want the drums to punch right through those instruments and ‘move’ them, but they just kind of sit there politely in the background asking for permission to make a little bit of noise.

After listening to Creatures, one canâ€™t help but stand in awe at how great of an accomplishment this album is. ACIDIC definitely have younger sounding vocals easily fitting them in with todayâ€™s generation but what is amazing about them is everything they have going on inside their songs. There is more to their music than just your typical pop rock sound. Every time you listen to a song of theirs you hear something new going on in the background. Take the fun of Hinder, the frenetic energy of Trapt and mix in the passionate sound of Hawthorn Heights with the ingenious behind Jane’s Addiction and you have the basic idea of what ACIDIC has to offer.