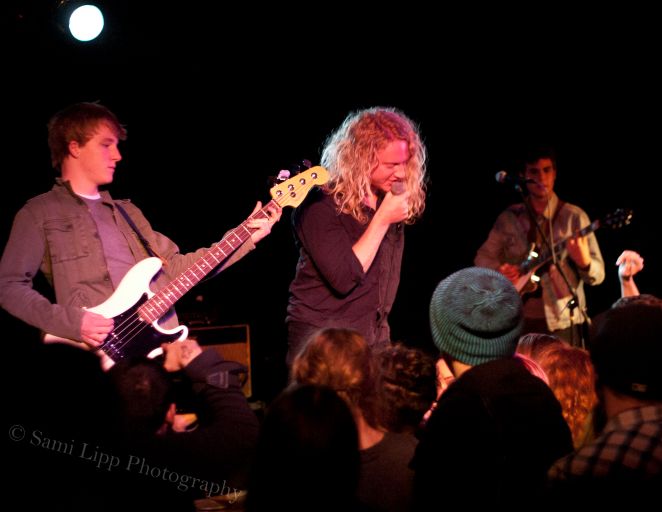 FIDLAR rolled into Detroit, with opening band The Orwells, at the Magic Stick on 10/17. This was my first time shooting for National Rock Review, and was I given a hell of a show to shoot!

FIDLAR is a skate punk/garage punk band from Los Angeles California; the four have been playing together since 2009. While most punk bands shy away from the Web, FIDLAR used it to their advantage and built their fan base via releasing music videos and singles online. It definitely paid off. After releasing many self-recorded EPs, their debut album FIDLAR (released January 1, 2013) was named as one of 2013’s most anticipated releases by TIME magazine, The Huffington Post, Stereogum, and Consequence of Sound. Their name (which stands for “Fuck It Dog, Life’s A Risk”) and songs like “Cheap Beer,” “Stoked and Broke,” and “Wake Bake Skate” celebrate the party skater lifestyle. And people love it.

The Orwells put on a fantastic show, front man Mario Cuomo has a truly captivating presence with his high-energy dance moves and exaggerated facial expressions, and tendency to fall back into the crowd as he sang. The Orwells are a tightly sutured bunch; a band that plays so ferociously that they almost appear to lose control, but never losing the tune. They sent the crowd into a frenzy.

FIDLAR headlined the night, and the first thing Zac Carper (guitar, vocals) did was demand everyone push in closer and to do whatever the fuck they wanted. The crowd was in a riot before the first song “Cheap Beer” was done. Girls jumped onstage and danced. People of all ages were leaping onstage and diving back into the crowd. Half-full beers got tossed in the air. They played fast, the crowd jumped faster. They pounded into each new song, the crowd pounded into each other. I attempted a few times to get into the crowd to get some photos, it didn’t work well- I had to squeeze out after multiple kicks to the head and getting the camera bashed into my face (resulting in a decent shiner the next day). It was a madhouse, everyone fed off FIDLAR’s energy. I have been in mosh pits before, but none like this, it was awesome! It all came to a head with the last song. Carper jumped into the crowd and then invited anyone who felt like it to come onstage. It was chaotic, 40 or so people crowding around the four guys in the band, though (amazingly) nothing got trashed or destroyed.

For the first show I got to shoot with National Rock Review, I’m so happy I got one like this. It’s a reminder of what good punk- good music in general- is supposed to be; fun. Nobody was “too cool” and just stood around, everyone was just in there, celebrating the music and having the good time that only an awesome show can provide. It was refreshing to see bands like FIDLAR and The Orwells, both relatively new and young bands, already having this success and passion for what they’re doing. These guys have some awesome times ahead of them. And I think that everyone should attend a show like this, at least once in their life.