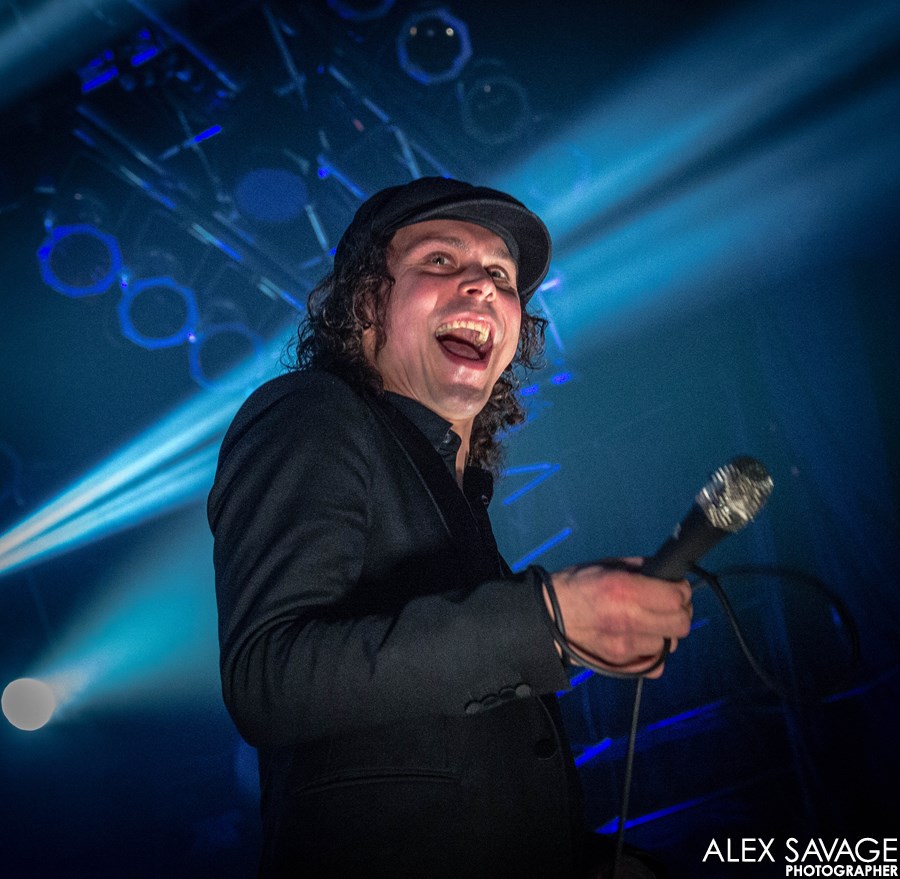 When you fly across the country for the kick off tour of your favorite band, shenanigans will likely ensue and the memories blur together to the point that it’s hard to know where to begin.

Let’s begin last spring in Hollywood at The House of Blues. HIM was slated to headline in a few select cities for a CD release tour for their latest ‘love metal’ offering, Tears On Tape.Â There I was, in the photo pit waiting for the band to hit the stage. Â Fans had waited in line in over ninety degree heat since noon that day.

This was to be the long awaited ‘comeback’ of a band that had mysteriously fallen off the radar. Â Their drummer, Mika Karppinen (AKA ‘Gas Lipstick’), suffered from tendinitis in his hands that made drumming an impossibility. Rather than replace a member of their metal family, HIM took a hiatus and waited to see what would happen. Â Luckily, the condition improved and Gas was able to pound the skins again. Â So after three years of virtual silence, HIM was back with a killer album and a tour.

There I was, waiting in the pit in front of sweaty fans, whom had patiently waited through an opening band and set change. Â Heartagram banner up, instruments on stage, techs running about doing their job, and unexpectedly the curtain gets pulled across the stage. Over the loud-speaker a nice gentleman announces the show is canceled due to the singer not being able to perform. An empty water bottle lands at the back of my head and I grab my camera gear and bolt.

Outside the venue, the feeling was palpable. Some fans were sobbing while others didn’t know how to react at all. Most of all people were concerned aboutÂ singer Ville Valo and hoped he would be alright. Another HIM gig was scheduled the following night at the same venue. While people with tickets hoped the show would go on, the entire tour was ultimately canceled. Â Valo had a severe respiratory attack and couldn’t sing. Â He received medical attention and rested up, then went back home to get ready for the European leg of their tour.

Fast forward a year and there I am in a moment of pure deja vu. Â Same venue, same photo pit, and many familiar faces. Â This time HIM took the stage and lit the place on fire. Â I’ve been a fan of HIM for many years now and have seen over a dozen of their gigs and, aside from their native Finland, I have never heard them sound so damned good. The band has turned a serious corner in their twenty-year career. Having started out so young back in the mid nineties, it feels like they’ve hit their stride and are perfectly comfortable in the skin they’ve grown into over the decades.

Supporting HIM on their USA leg of the current tour is a band from the UK by the name of Anathema. Â Coming off of their award-winning album,Â Weather Systems, there could be no better band to accompany HIM in my opinion.

With their panoramic sound and positive energy flowing through each venue, it was clear the band could hold their own. Because of past collaborations with HIM such as their song Angels Walk Among Us featuring Ville Valo on vocals from their previous album, We’re Here Because We’re Here, HIM fans embraced them with open arms singing along to their songs and setting the stage for a perfect double-header.

I will be doing a separate review with images from their sets in Hollywood and Anaheim in the days to come but for now, feast your eyes on this:

The set list stayed the same throughout the performances I went to, with Buried Alive By Love kicking things off for a well-rounded set of about fourteen songs. The guys ended withÂ a couple of encores, typically finishing with one of my personal favorites, ‘When Love And Death Embrace’.

While tracks from Deep Shadows and Brilliant Highlights, Dark Light, and Screamworks: Love In Theory and Practice were absent, the set list did not disappoint. With songs that had been out of rotation for the last few years, like Poison Girl and For You, being added back in.

I had the pleasure of interviewing vocalist Ville Valo about that very question and he gives a good answer that you’ll have to stay tuned here for in the next few days. Â I know, I know… but good things come to those who wait.

As if the Hollywood show wasn’t impressive enough, theÂ Anaheim show had the venue packed beyond capacity. Honestly, the longest lines I’ve seen waiting to get into a gig in quite some time. Â The fans were loud and the band was seriously on point. At that moment I knew this tour was going to do big things for HIM;Â success that they’ve never seen in the USA before.

I have yet to read a negative review of any of their performances thus far on this tour and they’re still going strong on the east coast, before heading south, and then they conquer South America for the first time.

My experience with HIM ended in my town of Chicago where I lived for ten years. The band recorded a small set for JBTV with an intimate audience of dedicated fans. Â I barely arrived in time, but the show was well worth it as the band warmed up with the crowd and delivered a fun spirited and unique performance. Check the link above in the coming days for streaming video.

On the same evening, the band hit the stage at the Chicago House of Blues in the quintessential home of the blues and killed it once again. Â Another HOB and another sold out show, but this time on my turf. Â A couple of days before, the band arrived from the west coast late in the evening and certain denizens of the dark, along with myself, whisked a particular singer away into the seedy depths of the city’s late night offerings.

Chicago opened its arms and made an honorary native out of Ville Valo for a few short hours much to his amusement. Always the gentleman, Valo invited his new-found pub mates to the upcoming show. He dedicated the song, For You, to them on stage thanking them personally for taking care of him and giving him the opportunity to see a side of Chicago he’d never seen before. Â Valo has always been considered a class act in the metal world. From my experience, he has a unique blend of European manners paired with being just like all my other buddies I’d hang out with on a given night; Â talking about music, movies, and just plain having a damn good time all in the name of rock ‘n’ roll.

If you’re looking for a great time, and perhaps some new music from a band you’ve never heard of, try HIM on for size. You just might like the way they fit. Catch the tour while you can. Tickets available through the usual channels.