Amon Amarth stormed through NYC on their Deceiver Of The Gods North American Tour with a sold out show featuring Sabaton and Vallenfyre.

The last time Sabaton graced the NYC stage, was in April when they were direct support for Iced Earth. When it was announced that Sabaton will be touring again, many fans had hoped that this time around they will return as headliners. Sabaton has a strong fan base in NYC as was evident from the welcome the band received. Before the band took the stage ,fans where already chanting their name. As soon as the lights went dim and the intro, “March To War” started playing, the screams grew louder. The fan favorite “Ghost Division” followed.

Joakim Broden introduced the band screaming, “We are Sabaton and this is Ghost Division.” One could not help think of Motorhead’s intro: “We are motorhead and we play rock and roll”. The crowd went wild as the band rushed onstage. There wasn’t a single person sitting as it seemed like everyone was trying to get up front for a closer view. The fans sang along to every lyric and jumped when Broden, the band’s vocalist, requested.

This band gives it their all at each concert no matter how small. They don’t take themselves seriously and have a good sense of humor. Broden jokingly said that “to fit in” Â they would play “Swedish Pagans,” Sabaton’s take on viking culture, a reference to the lyrical themes of Amon Amarth. They also managed to get a venue full of metal heads singing the YMCA when Broden announced that Sabaton had left for the evening and they are now theÂ Village People, referring to their camouflage gear.

They performed with the same intensity and energy as they do when they play major festivals and large arenas. They connect well with their fans and can make those at the very back feel as though they are front and center.The band was all smiles throughout the set and their love for what they do and passion for the music is easy to see.

The band was at times speechless at the reaction they received from their NY audience. Their appreciation for their fans is genuine and you could tell they were humbled by their reactions, especially during the crowd chants. One of the highlights of the night was when Broden pulled out a guitar for the song “Resist and Bite.” It was a rare treat to see him play the guitar and he left many fans speechless. 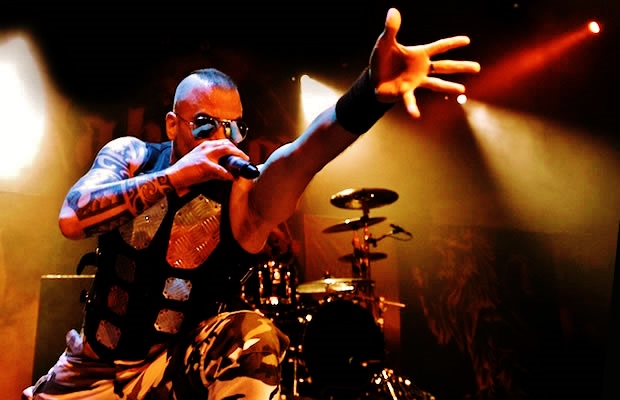 Sabaton are a tough act to follow. They put on wonderful performance. The fans jumped and sang along with the band. Even when the set was over, fans were still chanting their name. The band has proven they are one of the best live acts. The only disappointing thing was these guys haven’t had their own headlining tour.Â Given the welcome they received, we are hoping this will happen soon. During the tour, the band was able to play a few headlining shows. Their set list were longer and included older material. Sabaton are a must see band, their energeticÂ stage presence always makes for an unforgettable experience.

Sabaton will be returning to NYC in the Spring of 2015, where they will be co-headliningÂ for Nightwish. As happy as the fans are their favorite band will be back in the States soon, many are hoping to see Sabaton in their ownÂ headlining tour.

Right before Amon Amarth took the stage, former drummer and radio personality Richard Christy (ex-Death, ex-Iced Earth, Howard Stern Show) came to announce the 2015 Decibel Magazine Tour. It was announced the tour will feature At The Gates, Converge, Vallenfyre, and another special opener toÂ be announced in December.

If Sabaton had the crowd at Best Buy Theater singing and jumping, then as a contrast, Amon Amarth had the entire venue in one big mosh pit. Sabaton’s music provided the perfect soundtrack to prepare for battle, while Amon Amarth’s performance was the battle itself. During the performance, singer Johan Hegg said, “Iâ€™m surprised there is still a floor left,â€ after he witnessed the intensity of crowd. He has a thunderous voice and a commanding stage presence. The band had their viking ship on stage, which received fan approval. They performed five songs off of their Deceiver of the Gods album, along side many fan favorites.

Skeletonwitch, who had been touring with Amon Amarth, did not open at this event. Instead, the supporting act came from special guest, Vallenfyre. They are a British super group which consists of members of Paradise Lost, ex-My Dying Bride, and At The Gates. This event, the Decibel Magazine 10th Anniversary Show, was their first time ever performing in the States.

Skeletonwitch had their own special performance the same night. Decibel Magazine sponsored a headlining event at Saint Vitus in Brooklyn. They performed to a sold out crowd, and featured support from Evoken and Black Anvil. Fans at Saint Vitus did not see the appearance of frontman vocalist, Chance Garnette. He did not show up due to personal matters. Instead, Skeletonwitch performed a rare instrumental set.