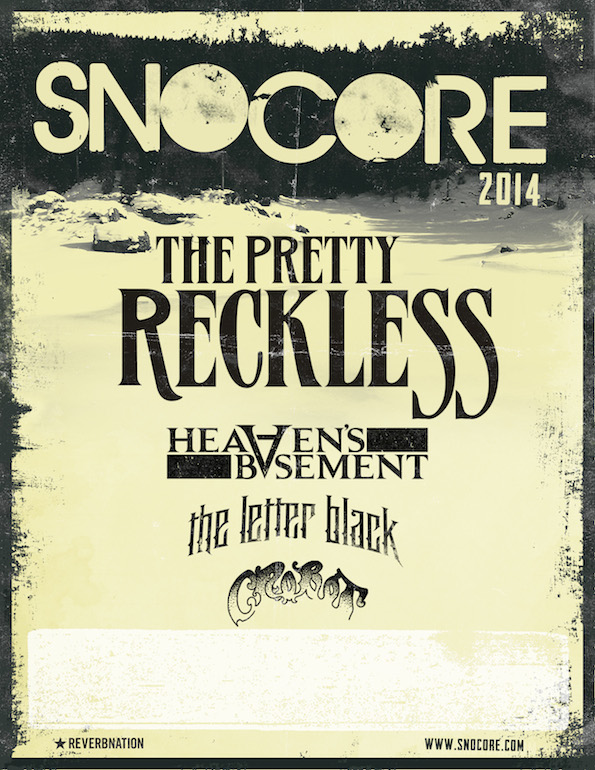 New York, NY (January 21, 2014) – The SnoCore Tour, a celebration of music and winter sports, is back after a two-year absence and kicking off on January 29, 2014 in Lincoln, NE. The tour has spanned more than fourteen years, running annually from 1996 to 2010 and was established as a way to fill the musical void during the winter months which was traditionally overlooked by other tour packages that are focused on spring and summer. In its first year, SnoCore showcased such bands as Sublime and Less Than Jake, over the years everyone from Blink-182 to Incubus to Everclear to System of a Down graced the SnoCore stage. Now, after a brief hiatus, Wind-up Records and TKO are proud to be uniting to bring SnoCore back to the winter 2014 music scene and back to its roots.

The Pretty Reckless is headlining all of the dates, Heavenâ€™s Basement, The Letter Black, Crobot plus one band chosen from the international artist platform, ReverbNation, will also be on the bill January 29 â€“ February 13, after that Heavenâ€™s Basement will exit the tour and Empire Street will join as the opener February 14 â€“ February 23. Tickets are on sale now and can be purchased here; tour dates and more information about the bands listed below.

The Pretty Reckless will release their sophomore studio album Going To Hell March 18 via Razor & Tie, pre-orders are available now here. The band formed in 2009 and released their debut album Light Me Up in 2010 as well as a follow-up EP Hit Me Like A Man in 2012. After two years on the road supporting Light Me Up, the band has risen through rock â€˜nâ€™ rollâ€™s ranks to become a polarizing presence. Over the course of their debut and EP, the quartet has sold over one million combined albums and digital singles and have supported Evanescence, Guns Nâ€™ Roses and Marilyn Manson on tour in addition to headline runs in both the U.S. and abroad. Momsen and her bandmates delivered nothing short of killer performances on their just-wrapped headlining North American â€œGoing To Hell Tourâ€ and the band will support Fall Out Boy on tour in Europe March 2014 after SnoCore wraps. Watch the Fan Instagram video for the current single â€œHeaven Knowsâ€, about to break the Rock Radio Top 20, and view the music video for â€œGoing To Hellâ€, both tracks from the forthcoming album.

Heavenâ€™s Basement have been making a name for themselves via their relentless touring and fiery live show plus music that features huge guitar riffs, killer melodies and an arena-rock sound. Formed in the East Midlands in England, Heavenâ€™s Basement have toured with the likes of The Pretty Reckless, Black Veil Brides, Papa Roach, Shinedown, Halestorm, Seether and more. Kerrang declared, â€œHeaven’s Basement play as if their lives depend on it. They should already be a big name – bristling riffs and jagged, riotous hooks are their poison and exceptional is not too strong a word.â€ The bandâ€™s debut album, FILTHY EMPIRE, is in stores now via Red Bull Records; the first single from the album, â€œFire, Fire,â€ cracked the Top 10 on the Active Rock Radio chart. Heavenâ€™s Basementâ€™s new single, â€œNothing Left To Lose,â€ is set to impact at Active Rock in January; the video can be seen here. Heavenâ€™s Basement is Aaron Buchanan (vocals), Sid Glover (guitar), Rob Ellershaw (bass), and Chris Rivers (drums).

The Letter Black burst onto the alternative rock landscape with their EP followed by the full-length debut, Hanging On By A Thread, in 2010 – now one of label Tooth & Nailâ€™s top selling debuts in recent memory. The Letter Black has also had radio success with four radio singles from their debut, â€œBest of Meâ€ (CHR No. 17), â€œHanging On By A Threadâ€ (CHR No. 23, Rock No. 6), â€œBelieveâ€ (Rock No. 4) and â€œNew Fireâ€ (Rock No. 17). Media have also gravitated to this heavy-hitting band as they have been covered in Revolver, AOL Noisecreep and AOL RadioBlog. Tooth & Nail Recordsâ€™ Pennsylvania-based rockers released their sophomore project, Rebuild in November 2013. The band is vocalist Sarah Anthony, guitarist Mark Anthony, bassist Matt Beal and drummer Taylor Carroll.

Central Pennsylvania band Crobot recently signed to Wind-up Records. The band is currently in the studio with famed producer Machine (Clutch, Lamb of God, Cobra Starship, Gym Class Heroes) to work on their 2014 Wind-up album release, the follow-up to their self-released debut album, The Legend of the Spaceborne Killer. Crobot embodies a mixture of groove-heavy riff-rock that will want to make you bang your head and shake your ass. Think of them as Wolfmotherâ€™s American cousins on acid who smell like leather and whose music scorches your ears like hot sauce to the taste. You can’t help but feel that you are taken into another dimension and back again with the songs of Crobot. Crobot will be on tour in select cities across the United States in 2014 with Clutch and The Sword before heading out with SnoCore. Crobot is Brandon Yeagley (Lead Vocals, Harmonica), Chris Bishop (Guitar, Vocals), Jake Figuroa (Bass) and Paul Figuroa (Drums).

Using ReverbNationâ€™s state-of-the-art reviewing dashboard, SnoCore will choose an up-and-coming artist to play in each market. Over three million musicians and bands use ReverbNation to manage their online presence and advance their careers through strategic industry opportunities. ReverbNation artists can submit to be selected through the opportunity listings in their free online profile here from January 29 through February 23.

For more information about SnoCore or any of the artists on the tour, please go to the SnoCore website.