The first wave of bands scheduled to perform at this year’s Riot Fest in Chicago has been announced.

Nine Inch Nails, Queens of the Stone Age and Jawbreaker will top the bill of the three-day festival. This will be an exclusive reunion for Jawbreaker. More than seventy bands have been revealed, with an additional twenty-five plus bands still to be unveiled.

Prophets of Rage, Paramore, New Order and Wu-Tang Clan are also amongst the bands scheduled to appear at the Douglas Park. The festival will take place over the weekend of September 15-17.

The impressive lineup will also include an exclusive 40th anniversary set by Bad Brains, with special appearances from Ministry and Vic Mensa. 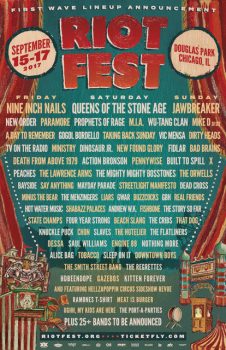 Three-day passes are now on sale through Ticketfly, with general admission and VIP options both available.

As is now a tradition at Riot Fest, a number of bands will be performing their seminal albums. Eight have already been publicized, with an additional two being revealed with the next wave of band announcements. Those we know of so far are:

Riot Fest will once again be home to the full-scale carnival with rides and games, as well as the Hellzapoppin’ Sideshow Revue Freak Show, which will be much bigger than previous years. There will also be over forty food vendors for you to choose from.