Tour kicks off in Austin, TX on May 29. Sophomore album Reckless & Me out worldwide Friday, April 26 via BMG.

Kiefer Sutherland has announced his initial U.S. touring plans for 2019 with a run of shows in support of his sophomore album, Reckless & Me, which is out worldwide this Friday, April 26 via BMG.

The tour will kick off in Austin, TX at 3Ten Austin City Limits Live on Wednesday, May 29 with additional stops confirmed for Fort Worth, TX, Kansas City, MO, Franklin, TN, Boston, MA and New York, NY, among others. The routing will also include a performance at the Grand Ole Opry in Nashville, TN on Friday, June 7 and an appearance at CMA Fest on Saturday, June 8 on the Budweiser Forever Country Stage. See all dates below.

Tickets for all confirmed U.S. tour dates go on sale this Friday, April 26. Additional dates are expected to be announced in the coming weeks.

Sutherland’s10-track sophomore full-length album, Reckless & Me, is highlighted by the singles “Open Road,” “This Is How It’s Done” and the recently-released “Something You Love.” Throughout Reckless & Me, Sutherland offers his Americana and country rock-infused songwriting style and features his gift of soulful storytelling – all delivered with his distinctive, whiskey-soaked and gravel-laced voice. Pre-order for the album is available now here. Stream “Something You Love” via Spotify here.

Sutherland’s three-decade, award-winning acting career has made him a familiar face around the globe, but his other passion is music. “I asked myself, says Sutherland, “‘what is the thing that I love about acting, and music?’ ‘What is the common denominator?’ For me it’s storytelling and music is a very different way of doing it.”

Produced by Jude Cole, Reckless & Me marks the follow up to Sutherland’s critically acclaimed debut album, Down In A Hole (2016). Now returning with Reckless & Me, Sutherland wants to keep touring and sharing these songs with his fans. Though he loves writing and recording, the stage holds a special place in his heart, and for the last three years, he’s toured extensively earning a reputation as a relentless road warrior.

“I couldn’t have imagined the depth with which I have fallen in love with touring,” says Sutherland. “To have the opportunity to convey intimate, personal stories to an audience has proven to be priceless.” 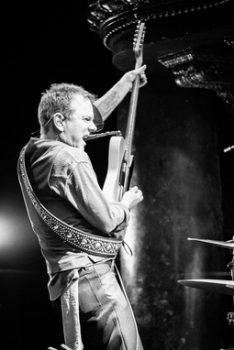