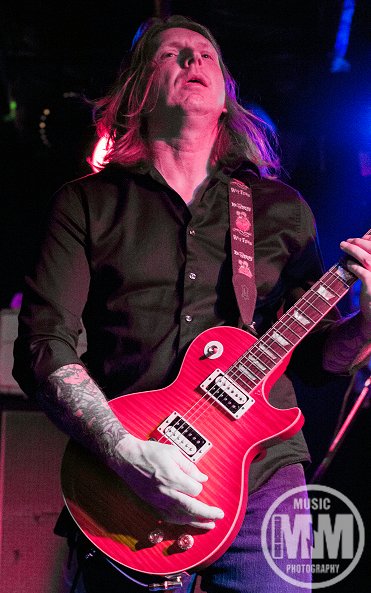 Detroit. The mighty industrial pulse of the country that so many have presumed is on its deathbed for so long now. A poster child of dystopiaÂ if the media at large would have you believe, where slumbering hulks of industrial steel giants lay smoldering at every turn, the city’s citizens scavenging for scraps while waiting for Robocop to come save them from despair. A city with no heartbeat, a pulse that barely registers on the arteries of the nation, stagnant and without life.

These conjectures could not be further from the truth today. This is a city that has never given up on itself through all the industrial and economic Â downturns, grief and turmoil that has befallen it over the decades. Â This is after Detroit Rock City. And this is a city that does still know above all, how to fucking rock like no other.

So many great bands have come from Detroit; Motown acts, rock acts, hip-hop, hardcore, techno. Detroit is the incubator of so many distinct sounds in this country yet people continue to turn their back on them. Looking beyond the national acts that have emerged, you have a rabid cult following of dedicated fans here. Fans that have grown up with several acts since day one when they may have recorded or practiced in their parents garage. Acts that have moved away to seek fame, some finding it, other not, but yet, they all return and gravitate back to Detroit to the roots that bond them to the soil that gave birth to the soul that is Detroit rock and roll.

Chuck Burns, a Detroit musician for several decades now, is one of those people who lives for the passion of music. Â Having played in several bands both nationally and regionally acclaimed, he has traveled the world with his bands. Seduce might be one of the most recognized, having made an impact on the 80’s metal scene and an appearance in the heavy metal documentary “The Decline Of The Western Civilization: Part II”.

But it’s some of his lesser known but equally talented groups he’s been a part of that still drive the pulse of Detroit Rock City. One of those acts is Speedball, a band that takes the sneering attitude of punks and brutally welds it with ass kicking rock and roll, that still garners exhilaration and excitement once or twice a year when they announce one of their somewhat annual reunion shows.

A Speedball show these days is like a family reunion of who’s who of Detroit rock. Beers flow and shots are toppled. Â Loyal fans descend upon one of the timeless mainstays in the Detroit rock club scene. Â This is Small’s bar inÂ Hamtramck.

A plethora of leather, spikes, muscle cars, Â grit, demeanor, and grease permeates the air when this band regroups to take the stage for a night, often with only a practice or two the week of the show. With other members of the band consumed with other life tasks, it’s hard to get them all together at one time to make it happen, Â But when it does, it’s a nitro powered supernova of everything that is great about Detroit’s music scene.

Check out the interview with Chuck Burns as we discuss Detroit, his solo projects, touring with Motorhead, accomplishments, and how he secretly covets owning the original tiki idol from the Brady Bunch episodeÂ Hawaii Bound.

Speedball plays at Small’s in Hamtramck, Michigan this Friday December 20th with The Bump-N-Uglies and The A-Gang.