The “Queen of the Slide Guitar” is getting ready to release her eagerly anticipated tenth studio album Stolen Hearts.

Stolen Hearts is Erja Lyytinen’s first studio album since 2014â€™s Elmore James tribute The Sky Is Crying. The album was recorded in between Sonic Pump Studios in Helsinki and State of the Ark Studios in London.

Stolen Hearts was recorded under the guidance of multi-platinum selling engineer and producer Chris Kimsey, who is best known for his work with the Rolling Stones on their classic albums Sticky Fingers and Some Girls. Kimsey 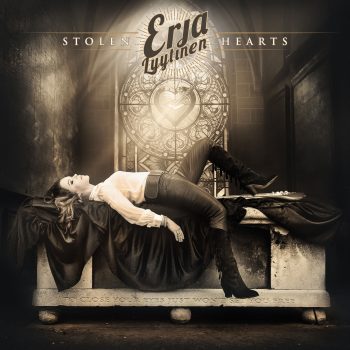 For those who have been fortunate enough to see Erja Lyytinen perform in recent times, you may have already have had the pleasure of hearing a few of the songs featured on the record. The likes of the title track, for which Erja has released a new video and the incredibly infectious “Black Ocean” have already established themselves as live favourites.

What is immediately apparent with this album is that it covers a lot of ground, with tracks spanning many genres and a whole raft of Erja’s influences. This is not just a straight-up blues record, it has many different layers which are gradually peeled away for the listener, maintaining their interest as the album progresses.

Stolen Hearts has it all, from the ferocious groove of “Rocking Chair”, which is one of the heaviest tracks Erja has recorded alongside the deep and funky “Black Ocean”, with its sublime twin part guitar harmonies. On the other hand, the beautiful “Broken Eyes” has more a classical feel with jazzy undertones. If you close your eyes the song transports you to a smoky New York piano bar. With less focus on the guitar playing in this number, the song really showcases Erja’s incredible vocal range.

As you would want and expect Stolen Hearts is packed full of Lyytinen’s trademark slide guitar play and blistering blues riffs, particularly on the likes of the title track with its Hendrix-esque, wah infused guitar licks and Erja’s incredible latest single “24 Angels”. Throughout blues number “Slowly Burning” Erja really demonstrates some passionate playing and a superb appreciation of space.

Stolen Hearts gives Erja’s fans something completely fresh and new whilst staying true to her blues roots. The album has allowed Lyytinen to truly flex her creative and artistic muscles so to speak and the end result is one of her most accomplished records to date.

Stolen Hearts by Erja Lyytinen will be released via Tuohi Records on Friday 7th April, 2017.