Blurring the lines between rock and alternative music from the 90s through today, Falling Through April has released an exciting new EP titled Risks & Rewards.

The beginnings of the band go back to when Piontek played in Manic. After numerous lineup changes, Foster, formerly of Strange County, joined in on drums. Manic fell apart after losing a couple of more band members.

Wanting to forge on, the remaining members decided a fresh start was in order and decided to change their name. According to an interview Piontek did with Vents Magazine, they jokingly threw around some band name ideas and the acronym FTA came up. They sarcastically came up with Failure To Appearâ€¦ later deciding on Falling Through April.

Sianiâ€™s band, Sleep In Sacrifice, practiced in the same space as the rest of the guys. He was looking for a new band. Having been friends for a while, it made sense for Siani to join on as their guitarist. Shortly after, Siani wanted to add a second guitarist and Candia was found through a posting on Craigslist.

Candia had relocated from Baltimore, Maryland to Charlotte, leaving his band Interstate North behind. Falling Through April recorded their debut album, Take Flight,Â in 2012 with then vocalist Cory Wells however they replaced Wells with Carlson in December 2013.

Carlsonâ€™s vocals is what makes Risks & Rewards exciting. His voice is strong and powerful with excellent vocal tone and texture. The music itself is comprised of artful and melodic vocals accented by uniquely songful guitars with dramatic yet mellow bass lines all driven by energetic and dynamic drums.

Each member brings a different style and influence reminiscent, at times, of bands like A Skylit Drive, The Starting Line, Escape The Fate, Aiden, Saosin, AFI, Falling In Reverse, New Found Glory and Motion City Soundtrack. Their music is similar to that of pop punk with a much more refined rock edge. 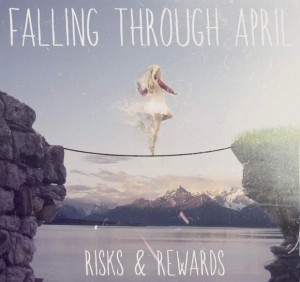 Risks & Rewards opens up with the track â€œBreakdown.â€ This is a good old-fashioned rock and roll song. The mix is clean and pure. The drums have an urgency that draws you in and really cut beautifully through the wall-of-sound guitars. The band shines on this with the lower-key verses bookended by heavier choruses. Carlsonâ€™s voice, while very good and very strong, seems a tiny bit naked during the choruses. The occasional harmony thrown in here and there, during certain parts, adds depth to the song but hearing them more during the chorus would have been a nice added touch. Again, though, even by itself, Carlsonâ€™s voice is powerful.

On â€œBroken Feet,â€ it sounds like the engineer used the exact same drum mix as he did with â€œBreakdown,â€ but the compression is a bit heavier. The downbeat leading the first chorus gets lost in the crush. This song follows that same pattern of more relaxed verses and up-energy choruses, and it is noticeable when those downbeats get buried. Although a great sounding song, increasing the compression’s attack delay and letting those kick thumps shine through more might have been a nice added touch the mix.

â€œThe Person Youâ€™ve Becomeâ€ is a high-and-low rock tune. It seems as though the drummer is changing the meter a tiny bit during the prechorus with some off-beat kick-drum accents. The whiny guitar that carries through the verses sounds great, and when the guitarist switched on the tremolo, it really sparkled. There is fantastic harmonies during the prechorus and the second half of the chorus itself, making one wish all that much more that you heard them more often. This is where Carlson really shows his talent, and where the song really takes on new life. More harmonies! Nice cavernous reverb on the guitar solo. Really makes one weep. This is the best track on the album by far.

On â€œEmpire,â€ it was nice to hear the songâ€™s prechorus and chorus using the same guitar riff but with differences in the backing guitar track. The more staccato prechorus melody leading into the continuous flow of the chorus was epic, and the drummerâ€™s use of the crash as a ride just made that ascension so much bigger. This song really shows how low and how high the band can go, and it was impressive. The guitars are reminiscent of Three Days Grace; tight and thick.

On â€œIn Control,â€ the snare drum sounds much thinner and has less of a presence than on the rest of the album. Not sure if itâ€™s a change in the overall guitar track volume sort of overpowering the snare, or if the snare itself is just dropped in volume or the EQ modified in such a way as to hide behind the guitars more? The drum line throughout the song is excellent, which has some really creative section structure, but It felt like the snare was a non-entity throughout. Especially when the CD restarted back to â€œBreakdownâ€ after â€œIn Controlâ€ came to an end; it became really obvious that there was something off about the drum mix in this closing track. Itâ€™s an enjoyable song with brilliant drum writing but the mix could have used a little work.

Falling Through April has headlined their own US national tours as well as internationally with Adelitas Way and The Pretty Reckless. They have played the Vans Warped Tour, Florida Music Festival, Celebrate Fairfax, Sonorous Music Festival and Dewey Beach Music Conference. They secured a PRS Guitars endorsement, got picked up as a Live Nation touring band, played live on National TV during the Democratic National Convention and was featured on the front page of ReverbNation, peaking at #1 on the ReverbNation Alternative charts.

With the release of Risks & Rewards, itâ€™s safe to say that Falling Through April is a band with a promising future and will be heard for years to come. 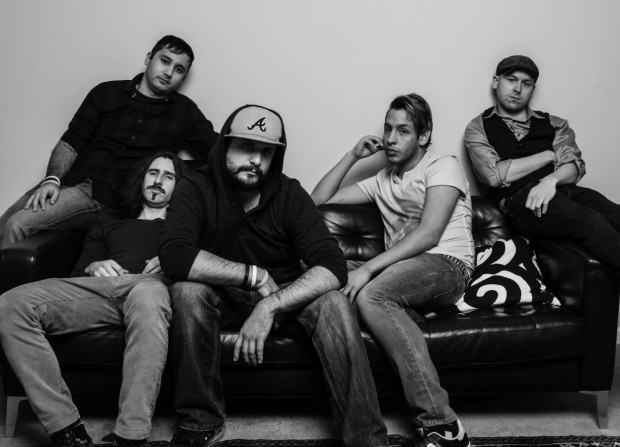