Plague by Hate Unbound blends the physical hostility of death metal with the technical beauty of thrash to create the heaviest of metal music.

Hate Unbound hail from Detroit, Michigan. This forgotten city of industrial dreams has been pitched to the curb of the American landscape and left to rot. In this land of desolation, new hope has taken root. From this landscape of loss and rebirth, Hate Unbound has transformed their rage and undying persistence into their new album called Plague.

Plague offers ten songs of extreme aggression that blend the genres of thrash and death metal. Hate Unbound is Franklin Hannah (drums), Sean Demura (bass), Art Giammara (vocals), William Cundiff (guitar) and Daryl Mitchell (guitar). Together this band brings forth a sound that will remind listeners of the power and technical ferocity of Suffocation, Decapitated, Atheist, and Revocation. 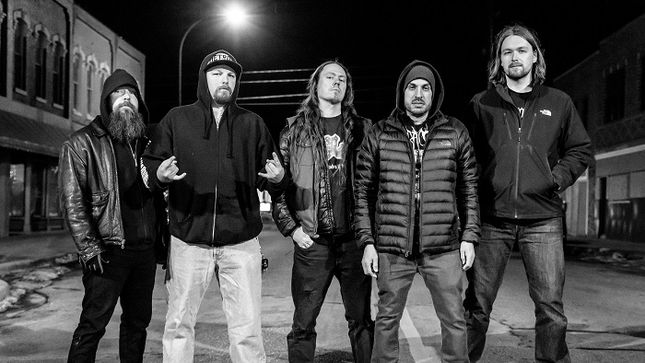 â€œBaptized In Liesâ€ unveils a mixture of dissonance paired with bone grinding riffs to kick the album off. Giammaraâ€™s vocals are gravelled with malice. Mitchell and Cundiff create tension by utilizing interesting chord voicings and progressions. They trade off lead guitar duties throughout the album. Their solos feature technical prowess that avoids the typical guitar noodling in favor of textured passages which create suspense and uncertainty.

Hannah and Demura are a singular unit of terminal velocity as their drum and bass propel each song to its limits. This gripping effect of speed and force is particularly evident during â€œPunctureâ€ and â€œSufferingâ€. Their playing brings the vicious fervor of the album to the forefront.

Each song on this album is replete with fist clenching riffs and sledgehammer rhythms. However, there are a few cuts which stand above the rest. â€œI, Martyrâ€ is a mosh pit inducing festival of crunchy riffs and pounding double bass. â€œCutâ€ roots within the thrash realm with racing progressions and plenty of splashy cymbals. The harmonize guitar solo adds the finishing touch.

Plague by Hate Unbound is the heaviest of metal played with technical ecstasy. Each song grips you with riffs that dig deep within and compel you toward mayhem. Their music is earnest and relentlessly forceful. Hate Unbound easily work their way into any playlist that appeals to maximal sonic hostility.