With Schenker’s latest concert film and CD package, the legendary guitarist returns to a city which has a special place in his heart – Tokyo, Japan. A destination which holds many fond memories for Michael Schenker, having been the location for the recording of his seminal MSG live album One Night at Budokan back in 1982.â€œIt’s been a long time since M.S.G. – Live At Budokan,â€ says Schenker. 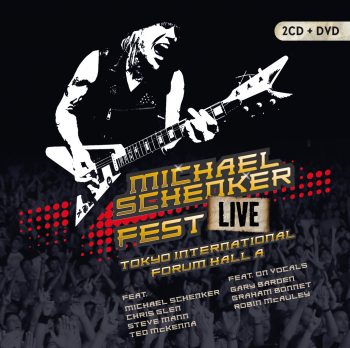 The scene for this spectacular event is the Tokyo International Forum whereby the legendary guitarist himself performs to an eager crowd of 5,000 die hard fans at the Michael Schenker Fest. To add magnitude to this celebration of music, Michael is joined by his original MSG bandmates Ted McKenna (Drums), Steve Mann â€“ (Guitar / Keyboards) and Chris Glen (Bass) who accompany the great man himself throughout the whole of the show.

The show kicks off with Schenker and his former bandmates taking to the stage with the aptly titled instrumental piece “Into The Arena” with its blistering guitar riffs and pounding rhythm from Glen and Mckenna.

For the first third of the show, Schenker is joined by one of a trio of guest vocalists featured – Mr Gary Baden, who was, of course, the original lead singer of MSG during the early 80s. Together they revisit some of those big hits which made the group famous during that period – many of which Michael still performs in his show with Temple of Rock to this day. These include the hard rocking “Victim of Illusion” and the unmistakable “Armed and Dangerous”.

As one vocalist exists the stage, another follows them. With each change of the guard so to speak, Schenker takes the opportunity to deliver some of the spellbinding guitar-based instrumental pieces for which he does so well. Mid-set this just happens to be another spectacular display of guitar mastery in the shape of “Coast to Coast”, which ushers to the stage ex-Rainbow frontman Graham Bonnet.

Bonnet’s time with MSG was shortlived, featuring on just one record Assault Attack, making this event even more special by giving fans both new and old the opportunity to see this great partnership share the stage together. Michael talks about this experience fondly â€œIt’s an amazing feeling to have all of my M.S.G. Family from the ’80’s performing together and especially with Graham Bonnet, who I never got to play any concerts after our Assault Attack album that was originally released in 1982.”

Collectively Bonnet and Schenker revisit the Assault Attack album, including the title track melodic number “Dancer”. Bonnet, who is often described by his fans as ‘the most powerful voice in rock’ is most certainly in fine voice, and during the latter, his vocals are perfectly accompanied by Schenker’s guitar riffs, and the superb keyboard work of Steve Mann.

Lastly, for the final third of the show, Michael is joined on stage by Robert McCauley, who fronted the McCauley Schenker Group from 1986-1992. Together they travel back to the 1970s and some of the classic rock anthems which Michael penned with UFO, including “Shoot Shoot” and “Rock Bottom”.

The show DVD is brought to a fitting conclusion as all three vocalists join the rest of MSG onstage. The unmistakable opening riff of “Doctor Doctor” brings this all-star group together to close out the show in style.

This concert audio-visual package is a comprehensive anthology of Schenker’s extensive body of work and a perfect record of this monumental occasion. One can only hope that at some point in the future that such an event might be staged in Europe in a similar vein, but until that point, this is about as close as you will ever get to the real thing.