Top Shelf Lickers are well-known in the Chicago music scene and can always be relied on for an entertaining, energetic live show. Their set includes their own material plus covers of tracks that would not be typical fodder for a crowd out to see a punk show. Such songs include the Top Shelf Lickers take on “The Sign” by Ace of Bass, a track guaranteed to get the crowd bouncing.

In contrast, new release Heartbreak City takes the band into darker, heavier territory in respect of their sound, although the songs still retain the signature catchy melodic vocal lines that are an essential part of their sound. 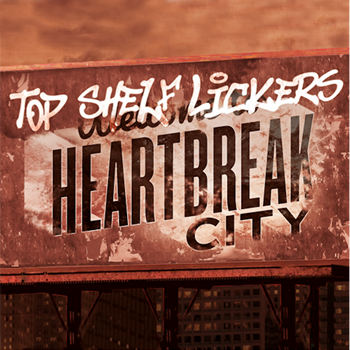 Singer and guitarist Neil Turk says that the band has a variety of influences, one of the main ones being NOFX but also including acts as diverse as Butch Walker, Led Zeppelin, and the aforementioned Ace of Bass.

The EP kicks off strongly with “Vinyl,” featuring the band at full tilt with Turk in top form singing about his “new addiction.” Right from the opening track, one thing that is noticeable is the quality of the production on this record. A nod must go to producer Sigurdur Burkis, Tim Flynn (who, in addition to playing guitar was also an engineer) and mastering engineer Alex Lowe in this respect. There is a thick and meaty feel to all the tracks with Turk’s voice very much front and center in the mix and guitar, bass and, particularly, drums all inhabiting the right space, perfectly complementing the vocals.

The NOFX influence can be heard on Heartbreak City, and it has to be said that Turk’s voice bears more than a passing resemblance to that of “Fat Mike” Burkett. However, the many and varied influences of all members of the band can be heard throughout this EP.

For example, the chugging guitar in the verse of standout track “This Is For The Rest Of Us” harkens back to a classic rock sound before moving into screaming punk territory for the chorus with Flynn’s solo bearing some of the hallmarks of Jamie Cook’s guitar work with the UK’s Arctic Monkeys.

The title track, “Heartbreak City,” is another foot stomper with a great solo from Flynn, the raw sound of his guitar cutting through well. A slight change of gear follows with the opening of “Hidden Inside,” a nice finger-picked acoustic intro and great harmonies belying Turk’s dark lyrics on this track. The song bursts into life after 30 seconds with the music providing a more fitting backdrop for the subject. As the track hits 2 minutes 30 seconds, there is another change with a heavy, almost Tony Iommi style riff taking over, along with some great drumming and a driving bass line taking the song to its conclusion.

The album closes with “For Rock n’ Roll,” a mid-tempo rocker that sees Turk offering up his thoughts on playing live music for a living and asking the question, “how far would you go? Would you even sell your soul for rock n’ roll?”

We’re not suggesting that the “Lickers” have sold their souls but, in the downtime since Heart Beats Brain, it seems as though they may have visited the crossroads and negotiated a bit with the Devil. Heartbreak City is a strong EP by a band that seems to be hitting its stride and finding its sound.

The EP release show is on Saturday, April 23 at Burlington Bar in Logan Square. We would strongly recommend you head down there, check them out, and buy a copy of the EP. Just make sure you don’t tell Neil you’re going to be there and then back out. Based on the lyrics of the closing track, that’s happened to him before and he doesn’t like it!