It’s been a long time coming, but Eyes Wide Open has been worth the wait. This latest work is surely Aynsley Lister’s best album to date.

Three years have passed since the award-winning Home was released. Eyes Wide OpenÂ is a journey back toÂ his rootsÂ Aynsley Lister says, wanting to produce something with “the raw edginess and energy of a band.”Â That he has done. It’s an album of his signature blend of blues and rock, but with an edgier feel; it is raw rather than over-produced. It’s an album of the world as seen through Aynsley’s eyes.

“All Of Your Love” is a great opener, and sets the tone for the album to follow. It’s rocky blues with great keyboards and superb guitar work. From a song about wanting it all, we go to a song about giving it all. One of the standout tracks, “Everything I Have To Give” offers killer riffs, throbbing bass, and period rock organ. 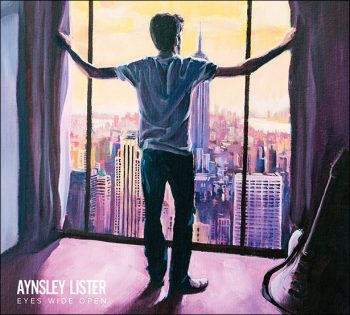 “Il Grande Mafioso” is a slow blues burner, about a late night card game in a dirty part of town, inspired by a love of the gangster movie genre. Italian guitar leads into a rich lyrical story painting a vivid picture allowing the music video to take shape in your mind. Another sultry blues number follows, “Won’t Be Taken Down”, featuring some great keyboard work, and heavy guitar riffs, yet another standout track.

“Time” has a great drumbeat laying the rhythm for a song about the effects of time, and the changing priorities in life. Another “movie scene” song follows, “Dishevelled”, with sultry keys and guitar telling of a bar-room liaison. It features some more amazing guitar work with a killer solo interlude. Again, the music and lyrics paint a clear picture for the listener.

The mood changes drastically with the short intro piece “Troubled Soul”, a mellow lead into a story of a young girl Aynsley met while on holiday. “Kalina” hid a sad, troubled life of depression behind a beautiful smile and outwardly happy appearance. Her passing hit home to Aynsley, writing this song to tell about a curse which affects millions of people. Another favourite â€” indeed a thought-provoking story.

“Handful of Doubt” is an upbeat groove, providing a more positive message. Again, the guitar and keys work well together to make what is sure to become a fan live-favourite.

“Right As Rain” is a cover of the Tommy Castro song â€” faithful to the original with a little extra Aynsley magic. “I am honoured to have such a talented artist record one of my songs. He delivered a fantastic performance of ‘Right As Rain’ on his new release”, said Tommy Castro. Hefty praise, indeed!

“Other Part Of Me” is a song of love with the perfect partner. The partnership between Aynsley and guitar stands out in this number. “Stay” is possibly the opposite â€” being in a love/hate relationship, ultimately destined to fail. The funky blues tone makes this number a real mover.

Another song, “Hold You to It”, about missing your love while being on the road closes the album. It’s another funky blues number with a jazz feel in parts. The track wraps up this collection strong and leaving the listener wanting more.

Overall, an excellent album showcasing Aynsley’s skill as a musician and songwriter. His talented band does their part, too. Add it to your collection â€” you will not be disappointed.

The Eyes Wide Open release date is October 07 from Amazon, iTunes, and elsewhere.Â Aynsley Lister is on tour October through December; check the website for dates.