Bonamassa is back with his best studio album since The Ballad of John Henry.

Joe Bonamassa continues toÂ push the boundaries of blues rock. With each new record, he challenges himself to deliver something new, something fresh, and keep things interesting whilst, at the same time, staying true to the roots of blues music.

For this album,Â Joe has assembled aÂ formidable lineup of talent including amongst others dueling drummers Anton Fig and Greg Morrow, bassist Michael Rhodes, and the legendary keyboardist Reese Wynans of Stevie Ray Vaughan and Double Trouble fame. In the command room, Joe’s long-time producer Kevin Shirley returns to the helm.

Blues of Desperation is packed full of masterful and technical guitar wizardry as you would expect from Joe. However, the album exhibits diversity which you won’t find on his other records. Bonamassa traverses both the familiar blues rock ground such as opening track “This Train,” which comes hurtling at you like a locomotive. He also takes a step outside of his comfort zone with the sweet, soulful acoustic number “Valley Runs Low” and makes it pays off. 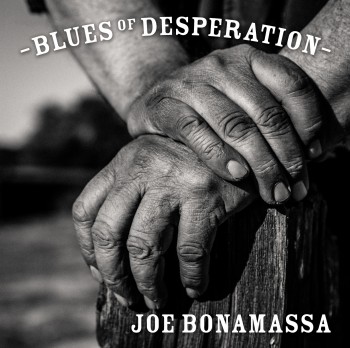 The album’s production value is incredible; producer Kevin Shirley has worked his magic on this record. Subsequently, the addition of a second drummer, Greg Morrow, gives tracks like the infectious “Mountain Climbing,” one of the standout tracks on the album, additional texture and depth. The inclusion of orchestral elements like the slow blues number, “No Good Place For The Lonely,” is also incredibly effective.

Several tracks on the album have an immersive feel transporting the listener to another place or time. With “Livin’ Easy,” oozing with soulful sax and honky-tonk piano, it’s a downtown Chicago speakeasy bar. By comparison, Joe’s latest single “Drive” takes you on a late night road trip to New Mexico. The song feels as though it would be an equally suitable fit on a Hollywood movie soundtrack as it exhibits some of those atmospheric characteristics.

The epic, slide guitar monster of a title track has an almost Led Zeppelin-esque quality to it. The album closes with the superb slow blues number, “What I’ve Known For A Very Long Time.”

There is most certainly nothing desperate about Bonamassa’s latest offering; there isn’t a bad track on the album. Blues of Desperation is a future classic in the making.

The album is scheduled for release via J&R Adventures/Provogue (Europe) on March 25th and is available for pre-order on Amazon and iTunes on jbonamassa.com.