All good things must come to an end. Fortunately, it was on a high note.

Ok, where to begin? This will probably be the most serious of the blogs because there are a lot of things I want to say now that the tour is over for us. I apologize in advance. Robots.

The show in Dayton. First off, we were pleasantly surprised by the venue. It turned out to be way cooler inside than it looked like from the outside. Nice and big, great stage, clean and well set up. There was an excellent staff there, too, very helpful, so that gets things going on the right foot immediately. Once we got loaded in, we noticed the giant field right next to the place. Perfect for throwing a football around and getting warmed up. Another positive for Dayton!

I think I can speak for all of us when I say that we tried to soak in everything about this last gig of the tour and enjoyed ourselves thoroughly. By now we were getting along famously with Fates and their crew, and it was a great atmosphere.

There was a great crowd in Dayton, some friends of ours made the show, and a few new fans from previous shows came out again. That makes things way more fun, as a general rule.

I think we played a solid show and received some great comments after we were done from fans and venue crew. Basically, we were riding a pretty good adrenaline high; that’s the best way to explain it.

After we had got everything packed up, we went back in to enjoy Fates Warning’s set. It’s been great every night, and we all wanted to take it in one last time. Of course, it was great again, and the crowd was awesome. Enthusiastic, singing along, just a great vibe all night. Then we got a huge surprise.

When they came back out for their encore, Ray Alder walked up to the front of the stage and said, “Before we go any further, we’d like to give a huge thanks to the band that’s been out on tour with us, Imminent Sonic Destruction.” Yes, I remember every word. Shut up. He went on, this part I’m paraphrasing a little… “You like those guys? (cheers) They’ve been true pros and a joy to be around, and we want to give them a round of applause, they’re right over here.”

We were all standing to the side of the stage, and the band and their crew all turned and applauded us for several seconds, along with the audience. Holy shit you guys. Goose bump city. Then he added a nice compliment about us as a band, and said that we also have “really good wine.” Yes, we shared a few bottles with the guys along the way. It cracked us up that he threw that out there on stage. Ray is genuinely hilarious, and one of the nicest guys I’ve met since playing music.

Anyway, it was the most gratifying conclusion to the tour we could have asked for, and I want to thank them for taking a moment out of their show to do it. They obviously didn’t have to, and it was so genuine that we were just speechless for a while after that. This is why we work so hard at what we do, even though it’s a joy and something we love. We work to feel the sense of accomplishment, but also for recognition and appreciation of our peers and the people we look up to. This was a moment none of us will ever forget.

Then they ripped into their encore, which was a one-two punch of epic proportions, just like every night. We were caught up in it with everyone else, and it was glorious. “Eleventh Hour” and “Point of View.” If you don’t know those songs, go check them out.

Everyone leaves happy after that encore, as they should. Later on, the band and their crew all joined us on our bus for an impromptu end of (our) tour party. What a blast, and what a great time we had chatted with the guys, laughing a LOT, and having a few relaxing beverages. It was a perfect extended end to a great experience for all of us.

I want to take this last few lines to thank them all for the fun. Jim, Ray, Joey, Bobby and Mike, along with Ian, Geno, Cash and Mike the sound guy. All of you guys were a joy to be around, even Ian, and it proves that good guys can get ahead. Hopefully, we’ll all cross paths again down the road!

With that, I leave you, loyal robots. Thanks for reading, and thanks to National Rock Review for hosting this tour diary and putting up with my shenanigans and jackassery. Hopefully, I’ll be doing this again soon, on tour for ISD’s upcoming album! Look for it! 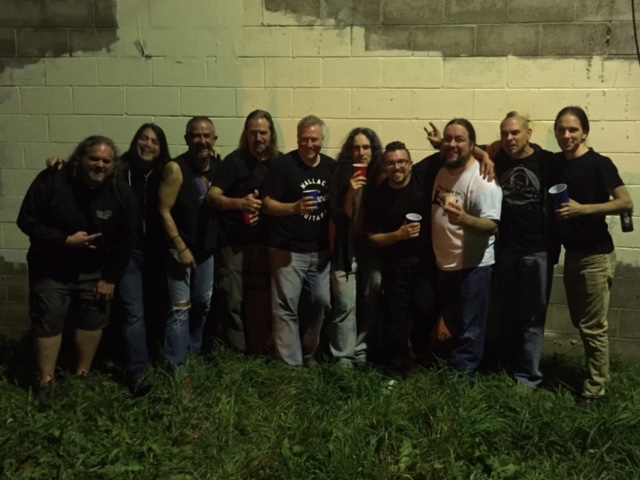