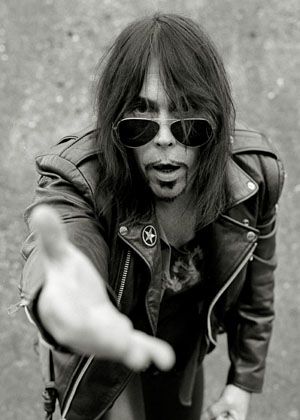 Monster Magnet vocalist and guitarist Dave Wyndorf is a visionary storyteller who’s songwriting style transcends the ordinary, catapulting listeners in to worlds beyond the physical, mental and spiritual. Having just left the studio after recording their 10th studio album “Last Patrol”, Monster Magnet is set to return to the states for their first American headlining tour in ten years. National Rock Review chatted with Dave over the phone about the new album, the state of music in the USA compared to Europe and his take on lyrical writing.

The album is available for pre-order on Amazon.

Today the band has released another new song from Last Patrol. The song entitled “Paradise” is receiving its exclusive premiere courtesy of Artist Direct. Get a first listen HERE.

The track “Mindless Ones” is streaming HERE and the song “The Duke” can be heard HERE.

MONSTER MAGNET have confirmed an in-store performance and signing at Vintage Vinyl in Fords, New Jersey on October 14th at 7:00 PM. In order to attend you must pre-order the album to receive a wristband. Go to http://www.vvinyl.com for more information

In support of Last Patrol, MONSTER MAGNET will be embarking on a full-blown North American Tour! Although the band has toured Europe relentlessly over the past decade, this is MONSTER MAGNET’s first full North American tour in over 10 years! The band is eager to hit the road in the states for the first time in what seems like forever. Prepare to hear MONSTER MAGNET classics and new cuts from Last Patrol for the first time live! Support will come from Royal Thunder and Zodiac. The tour is scheduled to kick off November 14th in Grand Rapids, MI and will run through December 14th in New York, NY.

Considered one of the most creative, diverse, and hard-rocking of contemporary American bands, MONSTER MAGNET is credited with pioneering “stoner rock”. They’re noted for the uniqueness of their sound, their authenticity as a band, their ability to grow musically, and the intelligence and wit of their songs.

Fusing garage rock, progressive rock, heavy metal, punk and psychedelia – Last Patrol is MONSTER MAGNET’s tenth studio album and a testament to everything they stand for. In addition to musical influences, the band has always been inspired by comic book, science fiction, horror movies, and B-movies by filmmakers such as Roger Gorman and Russ Myer.

“Last Patrol is a return to our roots in terms of vibe and recording style. It’s full-on psychedelic space-rock with a 60’s garage feel, recorded almost exclusively with vintage guitars, amps and effects in our hometown of Red Bank, NJ. The songs are a kind of Space-Noir, tales of cosmic revenge, peaking libidos, alienation and epic strangeness. It’s a weird trip through the back alleys of a dark, retro-future, which not by coincidence very much resembles my own life. (laughs) The lyrics aren’t fantasy really, rather a recounting of my musings on, observations of and general emotional reaction to my life and environment during a 1 week writing period in February of 2013. But I tend to use the vernacular and imagery of science fiction and surrealism to express myself and that’s where these lyrics get trippy. There’s also our cover version of Donovan’s “Three Kingfishers” which I thought fit the mood of the album.” says singer Dave Wyndorf.