When you’ve only been around for a short time and can already claim Warp Tour success, even just East coast, you’re doing a great job.

Ephraim Francis (vocals), Jimmy Snyder (vocals), Ricky Nachurski (guitar), Devon James (guitar), Matt Cellini (bass), and Nicholas Nachurski (drums) give breathe to the beast that is I Hate Heroes. Having just had their debut album drop, If Life Were A Book, Iâ€™d Skip This Chapter, the guys are gearing up to continue to bring their six members of mayhem to a venue near you. Oh, and possibly making a full length album in the near future, well, if they can raise eighteen thousand dollars. It ain’t cheap to be in a band. We did manage to lure Nicholas into an interview with the promise of home cooked food and no red cups from Starbucks. Enjoy the interview below.

NRR: Thanks for taking some time out, Nicholas, to answer some questions for National Rock Review. What’s been going on with the band, I Hate Heroes, in 2015?
Nicholas Nachurski: No problem! We love doing interviews! We have been doing a lot of promotion this year while playing one off shows and festivals as well as headlining a spring tour. We also got the opportunity to be a part of Vans Warped Tour (East Coast). And now we are currently writing a full length as well as getting ready to release a Punk Goes Pop song within the next couple of weeks so keep an eye out!
NRR: Your debut album is If Life Were A Book, Iâ€™d Skip This Chapter if my memory isn’t horribly off base. How was recording this album? And what might be one thing you’d change in the experience for the process next album?
Nicholas Nachurski: Yes, that’s correct! The recording process was fairly smooth and easy but also fun at the same time. We had the honor to record with a good friend of ours, Ricky Armellino (This or The Apocalypse). We went in with the songs that we had previously written, prior to the studio and just recorded each instrument song by song. One thing that we will change is being more open minded. We had this straight path of how we wanted the songs to be, which didn’t give us much room for being open to new ideas.
NRR: For the sound of the band, how would you describe it to new listeners in your own words?
Nicholas Nachurski: As far as our sound, we would definitely all say we are a very melodic, upbeat band with a pinch of heaviness. Our songs will make you want to get up and jump to the beat and at the same time it will have you singing along with the melodies.
NRR: You are listed as a pop, punk, metal-ish band from Reading, PA. What’s the local scene like there for that type of mix to percolate into what you guys are now?
Nicholas Nachurski: The local scene here is very diverse. You can have a really heavy band that you can go all out to but then have a band that is pop punk that you like to sing along with. That being said, that’s where we fit in really well. We have music that appeals to all types of ears.
NRR: Who are/were some of the influential bands or musicians to help you guys achieve your sonic vibe?
Nicholas Nachurski: Some of the bands that influenced us are A Day To Remember, Memphis May Fire, Crown The Empire, The Used, August Burns Red, and Pierce The Veil.
NRR: I know you’ve as a band have already played with some big names, some true road warriors on Van’s Warped Tour. Have you gotten any good advice from any of the bands you’ve played with or picked up some good habits from watching them on the Kevin Says stage?
Nicholas Nachurski: Some of the best advice we gotten was to never give up the fight for the prize because hard work pays off. We have to keep going strong. Promote as much as we can everywhere we go. We have also picked up some good habits. The biggest one is to go out there and just have fun on stage. Remember the reason you write music and just enjoy the time you get.
NRR: You guys formed in the late part of 2014. How did that come about exactly and did the chemistry you seem to share click from the very first rehearsal or did it take some time being an unusual line-up for things to gel?
Nicholas Nachurski: Well, our two guitarists and drummer were in a band together prior to our current one. They actually needed a singer for their old band and our producer that recorded “Avarice” knew we were looking for a vocalist. He then messaged us because Ephraim was actually in his studio with a solo project and said “hey this could be your guy, hit him up.” Being that the instrumentalists have been in prior bands together, the chemistry was really strong since the beginning. The bassist was a long time friend of the band, so he was willing to hop on board and it was an easy transition. Jimmy then ended up coming on board and had a lot of industry experience, which made it a very easy incorporation into the mix.
NRR: What has been one or two of the more difficult lessons you’ve had to learn since you started out to make your mark in music on either side of the country?
Nicholas Nachurski: A big lesson that we learned is that promotion is everything for a band. Very rarely will a band just “blow up” overnight. You have to be willing to talk to people if you are really passionate about music. That is the only way someone will hear about you, is through promotion. Another lesson is definitely making money and saving it. Nothing in music is cheap. It all costs a lot of money, especially if you are an independent band. 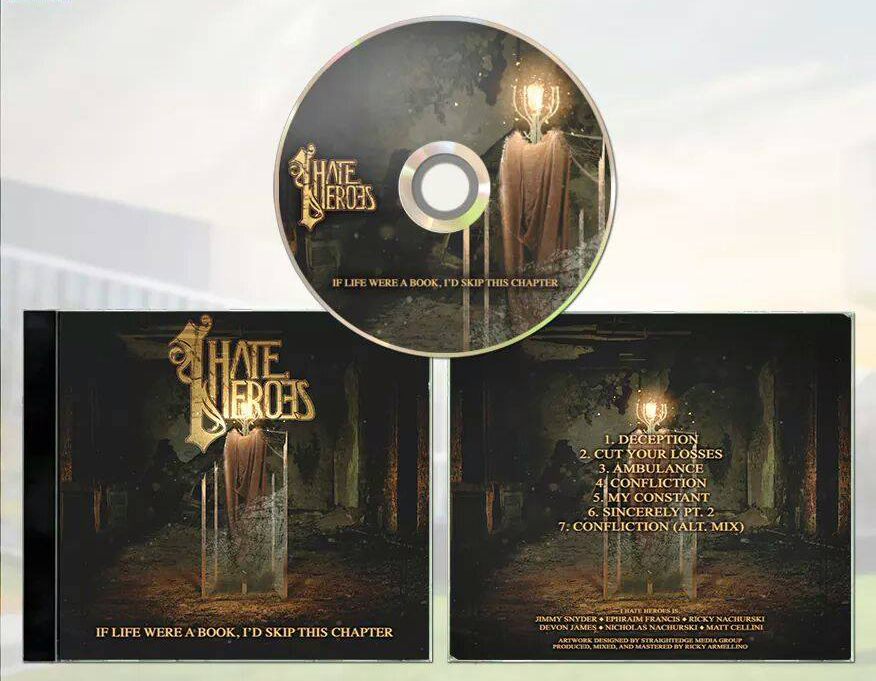 NRR: Is there a moment, that thinking back on it now, in the you’re relatively new story as a band that you can’t help but still feel a tad bit embarrassed about, makes you laugh about despite yourself, or just still makes you shake your head in disbelief? A Spinal Tap moment if you will, that you’d be willing to share with me?
Nicholas Nachurski: Yes, of course. We have had many moments all across the board. One that sticks out of our head is when our tire popped. We had just ended our spring tour. Our last show was in Savannah, Georgia. We just crossed into South Carolina and we pulled over onto the shoulder of the road which was full of stones and rocks to look for our bassists bag. Two minutes later we pull into a gas station to feel our van shake. We got out and realized our rear passenger side tire had blown. So after calling several Walmarts and tire places to try to find a tire (at about 1 or 2 AM), we then waited over an hour for AAA after they told us they couldn’t help us unless we had another tire. Luckily we had a spare tire in which, might we add, was a different size from the rest. Took us 18 hours to get home but we finally made it.
NRR: What has been the biggest stereotype you’ve had to deal with when dealing with venues, promoters, radio stations etc when they find out you’re pop-punk?
Nicholas Nachurski: Well, to be honest, we wouldn’t necessarily call us a “pop punk” band. The reason we say pop punk is because we have pop punk influences but in all reality we are actually a post-hardcore band. With that being said the biggest stereotype is that we are a lighter band with little to no screaming. That’s what a lot of pop punk bands are which definitely is not who we are, so it definitely throws them back a couple steps when they hear our music.
NRR: How does the group go through the writing process, is it all one person with help or is it a group effort from start to finish?
Nicholas Nachurski: Our writing process is fairly simple. It is a group effort. Every idea we generate gets run by everyone in the band to gain feedback whether it is positive or negative. To start off the process, our two guitarists, Ricky and Devon, will get together and bounce ideas off of each other until they come up with cool riffs/leads. While they do that, usually our drummer is sitting with them, listening to help generate ideas and give them feedback. After that they figure out what part of the song is what; i.e. (intro,verse,chorus,etc.). Then our drummer, Nick, comes in and writes his beats/fills to the guitars at the same time our bassist, Matt, comes up with his riffs and patterns. Lastly, our two vocalists, Ephraim (clean) and Jimmy (screams), collaborate on lyrics and who has what part before they create their vocals and complete the song.
NRR: Tell me about the name, I Hate Heroes. Is there a story behind the name or was it a game of darts and that was what you hit, (laughing)?
Nicholas Nachurski: (Laughing), the name actually came from a show that our vocalist, Ephraim, used to watch. He heard the one character say it and thought, “that would be a cool name.” Then, as he started really thinking about it a deeper meaning that coincides with his beliefs arose. Today it stands for: Believe in yourself as you are your own hero.
NRR: How is the experience with Carry The 4? Is it still better to have a label behind you, or in this day of DIY, can you do a lot of things yourself and what you might not can be done by a good PR firm?
Nicholas Nachurski: Our experience with them is excellent. They have gotten us a lot of interviews, radio play and a lot of press opportunities that we wouldn’t have been able to or had time to get on our own. We believe it is better to have label to back you. It always helps a band to have backing and support to help guide you through the process of growing and help market you in a way that may not be immediately able to be done yourselves. We found it can be difficult to get press or good opportunities such as tours, festivals, endorsements and things like that, without some sort of backing whether it is a manager, press team, booking agent, etc. Yes a lot of what can’t be done by yourself, can be done through a solid PR Team. We are extremely lucky and thankful to have two great teams in Carry the 4 and Kolossal Management helping to back us.
NRR: Since the name of the band is of course, I Hate Heroes, if you had to root for one or the other, who you got in Batman Vs. Superman?
Nicholas Nachurski: (Laughing), that’s a great question. Batman because Clark can’t.